When Daughter No1 was a child she use to hate the fact that every apple that came into the house always had a bite missing. They did not come into the house this way but her little brother was not happy unless he had had a bite out of every one in the fruit bowl. Eventually he out grew this phase. But when I was in the other day I noticed she now has the same problem - Minky takes a bite out of them all, see I wasn't such a bad mother!! 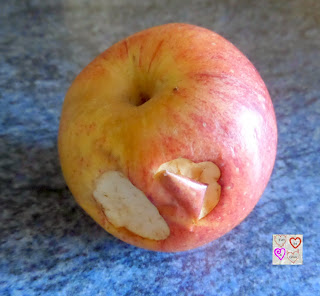 Bob is going to gymnastics and so I am watching the gruesome twosome for the hour and a half that they are away. Was a lovely evening on Monday so I decided to take them for a walk. I had strict instructions not to let them fall asleep and time we got down the fishery Minky was nearly asleep so I let him out for a walk, He managed to find puddles to paddle in, Dinky at least played with the flowers. 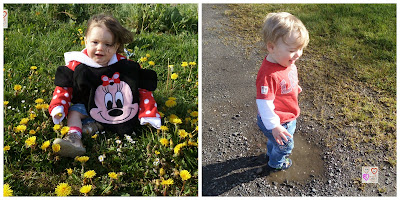 Thursday is Daughter No1's first wedding anniversary and as a Tuesday is SIL's only evening off work I volunteered to babysit so they could get out for a while. The gruesome twosome were in bed time they went out so Bob and I sat and played games. 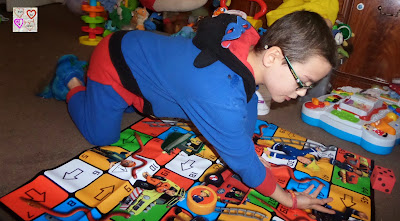 Went for a walk up one of the top roads as I had decided to go and look for two caches that are up there that I have not found yet. It is one of the highest points around and you get a very clear view of where we lived for six years. We lived in the farmhouse whilst the building of the dairy was going on. We have pictures and video of the whole project from the first hole in the ground. Was amazing to watch it go up.

Took the gruesome twosome and Bob for a walk down to the fishery, there is really no where else to go for a walk to in the village, to give mum and dad some time on their own. Minky was tired and so was not out of the pushchair, Dinky was out and having fun. I brought them up to the house to play in the garden for a while. They had all sorts of toys outside but ended up playing with the watering can and the brush. 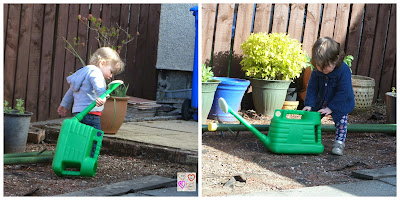 I keep getting a request for a pot of stovies. Daughter says they jut do not taste the same when she makes them, any excuse!! So being the nice mum that I am I made a pot for her. They don't look overly yummy but they taste good. It was one of the meals that the two boys hated but the three girls loved. 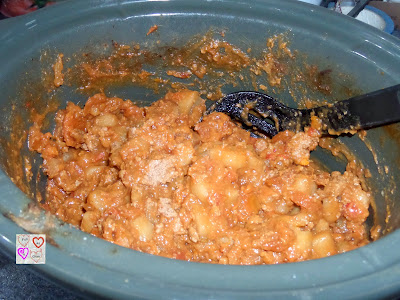 Made a cake last night, a chocolate cake with a strip of marzipan through the middle. 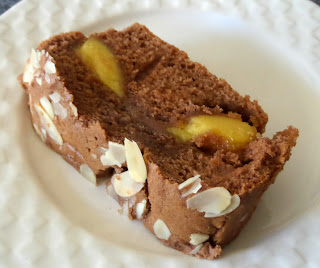