When we were up in Oban for the wedding we decided to stay on a few days and make a holiday out of it. Previously when we were in Oban we went on a whale watching trip, which for all we did not see any whales was a great day out anyway. So this time round we decided to go for something a bit different and we fancied seeing puffins on Staffa as well as pick up a cache there. There were a few tours that went there but we opted for one that takes in Mull and Iona as well.

Our first part of the travel was on the big ferry from Oban to Mull which took just over an hour. We decided we would take our geocache trackable with us and clock up some miles on it before we will let it loose when we get home.


Sadly the day was dull with no nice clear blue skies as a backdrop for the amount of beautiful scenery we passed on the way. We did pass Lismore Lighthouse, and surprisingly there was still snow on the hills behind it.


So our first stop was Mull

where we were met off the ferry buy a coach. Our coach driver was called Colin and he was a right laugh. He also gave us a commentary and lots of useful, and useless, bits of information. Apparently  all the secondary school children that live on half of the island  nearest the ferry port go to school in Oban. They go over on the ferry on a Monday morning and board until the Friday evening when they return home, Wish I had known that when my own children were that age, I may well have moved to Mull. Only joking kids. There are approximately one hundred and ninety one miles of roads on the island, with less than six miles of that being double track, the rest are single track roads with numerous passing places. There are rules of the road, things like if there is something smaller than you behind you you cannot pass any more than three passing place without pulling in to let them past. The bus driver was very considerate and aware of oncoming vehicles at all times.
One of the bridges we had to cross was very tight both width wise and length wise and Colin told us they call it the P45 bridge, as you ay get your P45 if you scrape the bus.

The scenery was stunning, with Colin pointing out waterfalls, telling us the names of the lochs and pointing put wildlife like otters, seals and golden eagles. Have to say it broke my heart to be driving past so many geocaches without being able to stop and get them, but to be honest even in a car there was nowhere to stop.


So we arrived at the ferry port on the far side of the island and waited on the small boat coming to pick us up to go across to Staffa. Have to say I have not seen water so clear and blue in a long time, it was beautiful.


I was surprised how many of us they actually got onto one smallish boat. This made it difficult to move around the boat and take pictures but we could still enjoy the trip watching the changing scenery. 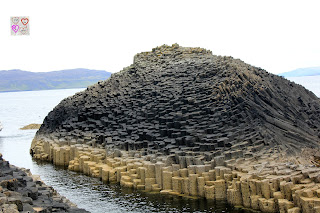 Staffa is the stuff of legend – an unspoilt and uninhabited island best known for its magnificent basalt columns and spectacular sea caves.
The most famous of these is Fingal’s Cave, also known as An Uamh Binn (Cave of Melody). It has a unique, cathedral-like structure and its hexagonal columns are similar to those of the Giant’s Causeway in Ireland.

Fingal’s Cave was immortalised by Mendelssohn in his Hebrides Overture, after he visited the island in 1829, and in a famous painting by the artist J M W Turner. (source http://www.nts.org.uk/Property/Staffa-National-Nature-Reserve/ )

We landed on the island and were shown where to go for the puffins and which path to follow for the cave. We were told it was possible to see the puffins and the cave in the allotted seventy minutes on the island.  Have to say that was seriously pushing it and you had to go some to get to see both with little time to truly enjoy either fully. I felt we could have done with an extra half hour on Staffa and if we are ever in a  position to go back we will make sure we go on a trip that would give us longer here. 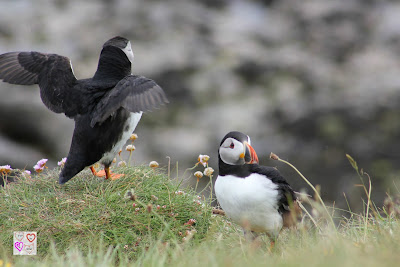 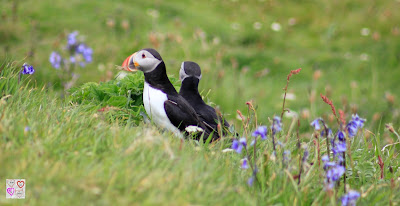 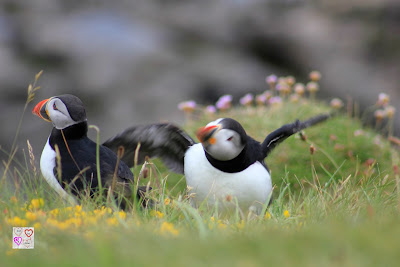 A lot of us went to photograph the puffins.

I also got some video footage of them, hoped to get one coming in with some food but no such luck.

All too soon our time was up and it was back to the boat. I struggled a bit on the steps as I hate steps but managed slowly.

We got talking to one of the American tourists and she had not had time to get to the puffins as she had her elderly mother with her so she asked us if we could e-mail her some of our puffin pictures, so we have done.


As we approached the island we were given some of the history.

We walked round to St Oran's Chapel

as we approached the chapel we could heard some hauntingly beautiful music. I thought it was piped music. We went into the chapel for a look around and only when the music stopped did I realise it was the two ladies sat in the chapel that were singing. I could have stopped all day and listened.

We then moved onto the Abbey

The tiny island of Iona has been a vibrant centre of Christian worship since Columba arrived here in AD 563. His monastery thrived for centuries, despite repeated Viking raids beginning in 795. Around 1200, the Abbey and Nunnery were founded, introducing new forms of worship and new buildings, while still welcoming pilgrims to St Columba’s shrine.
Even after the Protestant Reformation of 1560 brought an end to Scotland’s monasteries, Iona served briefly as a Cathedral of the Isles. (source http://www.historic-scotland.gov.uk/propertyplan/propertyoverview.htm?PropID=pl_160) 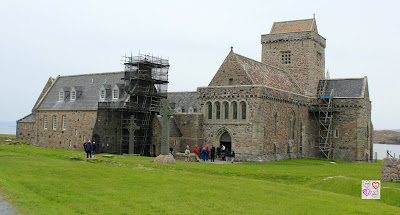 We are Historic Scotland members and so we got in for free, the price we paid for the trip did not include entry.

Various views round the Abbey were quite pretty. Hubby was trying to feed the young calf but it was for none of it.


On the way back to the ferry we stopped and looked at the Nunnery, it was busy on the way up as other stopped to look then.


I felt we could have had less time here on Iona, but then there were shops and a cafe and such like for people to spend time in.

Back to Oban via Mull, this time we made sure to get a seat where we could see the other side of the island. Was a quicker bus journey back as we were running a bit late, but the ferry waits on the last bus regardless.

Have to say it was a very pleasant day out.