Looking for different things to eat in my break at work, and found these and some lentil chips in the health food shop. Very yummy they were too. A bit healthier than normal crisps. I have been and had a look at their website and they do a huge array of products, must have a look out for some more.

Hubby bought himself a new toy and had to wait till it stopped raining so that he could use it. He has been putting it to good use this week.

Was round at Daughter No1's house as hubby was looking at the task of clearing up the garden for them, Bob and I were playing rolling the ball up and down the slide, sticking sticky willy to each other and generally playing at nutters in the garden whle they talked business. He decided he did not want his photo taken and was climbing to the top to get out of reach of the camera.....hmmm sadly for him the zoom works.

Far far far to hot to be alive. I was awake as the sun was rising just after 4 am, quite pretty it was too. Spent a few hours out with Bob and the gruesome twosome as hubby, daughter and son in law were busy in the garden. I had been helping to clear but there were too many very large eight legged creatures and they were items going in the boot of her car to go to the dump and there was no way I was getting in the car with them!! You would see it on the news "mad woman causes multi car pile up leaping from car at 60mph on the bypass"

So we went for a walk. Bob asked to go to the big park but people will have been eating ice cream and I explained to him it would not be safe. So we went for a walk along the back roads where we had shade some of the time. We had plentiful discussions including the life cycle of a butterfly, the life cycle of a tree when we spotted a dead one covered in ivy and even how to tell the sex of a cow/bull apart from the ring through the nose.

Fifi was away at a Guide camp so just Bob to have over tonight.He has been wanting to go fishing with granddad for a while, so we took off to the river for some casting practise. He had quite a bit of fun and really enjoyed himself despite it raining for some of the time.

Never say the West coast of Scotland does not get warm, this was the temperature at 5.40 pm today. I have not been out any more than I have to be this week. Desperate to get some geocaching dont to take me over my 400th but its not happening in this weather.

It has been far far far to warm this week and so we have been eating fridge food. I cooked up pasta, baby boiled potatoes and boiled eggs. Add to that a pile of salad and cooked cold peas and sweetcorn and some cold meat and that has been it all week, Much easier to pick at when hungry and better than junk if healthy things are available.Even got hubby onto eating mini shredded wheat this week, a big change from the man who only ever ate biscuits for his breakfast.
One of the things I made were sweet almond Yorkshire pudding.
Quantities vary depending on how many you want to make and it is one of those foods I never measure anything.

Mix almond milk with eggs and a drop of sugar. Stir through some flaked almonds and linseed then add enough flour to make a medium batter. Pour some oil into a muffin tin and allow to heat in a hot oven (180 oC) and pour mixture into the tins, Cook for approx 12 mins and allow to cool. Serve with yoghurt. I usually make my own yoghurt but decided this time to treat myself and try these new ones I saw - and very nice it was too. 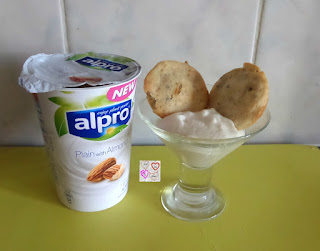