Out in the pouring rain

Well last week went from the hottest day of the Summer to still too warm but muggy and wet.  On Friday I was babysitting the three middle ones while my daughter took Spud and went to pick up Fifi from Glasgow, she had been away to camp for a week. They had been told I was taking them out for a walk so the minute I got in they went on the hunt for wellies and jackets and were rather excited.Well the twins were anyway, Bob was not quite so keen,but the park in the rain with grandma was a better option than Glasgow and back.

So despite the weather I decided to put on their jackets and wellies and go and play in the park. They have each others jackets on, Dinky picked up Minky's and he just went with the flow and put hers on. To be honest I would have been as well putting them in sandals and just tea shirt and shorts as they were soaked to the skin time we got back anyway.
First time I have braved it with them without either their reins on of their walking straps. I just took their hands to cross the road and then let them run free.

The twins played really well together. At least with us being the only people in the park I did not have to worry about them running in front of moving swings etc.

Dinky is not usually one for playing on much but she played on just about everything. She spent ages laughing as she sat on top of the slide and banged her wellies up and down making a noise. She did have one go on the curvy slide but went down a bit to fast with it being wet and got a bit of a fright. A cuddle and she was soon fine again.


They played on most of the equipment in the hour we were out and Bob joined in and played as well after spending the first ten minutes sheltering from the rain under the climbing frame.


The caterpillar is too heavy for the twins to move much on their own, so Bob sat on with them and helped.

Dinky was quite happy to sit on it by herself and laugh at the other two playing.

They both played on the springy see saw as again they can make it move slightly now between them, but I did help and push them to make them move faster. They both love to be bumped.

Bob played on the rather slippy climbing wall but it really is the only thing in the park to challenge him. He was also on the zip wire but no pictures as it is at the far side away from where the twins were playing.


Minky likes to go up high in the swings so he was in the baby swings as he is too small just yet for up high on the other swings and he often lets go.

Dinky prefers these swings as she is not keen on going up high anyway. 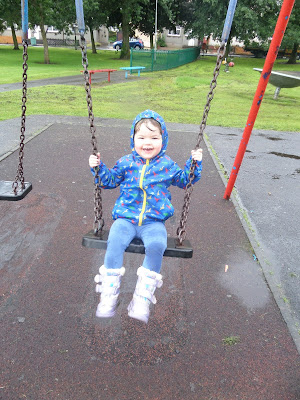 They jumped and splashed in just about every puddle on the way home. Not quite sure what this sign was in aid of. There is a lot of building work going on with the new school being built to the right of this picture. But there was no sign at the other end of the footpath as we came down from the top. Also when you go left as we did, the twins followed Bob as he always goes that way, you come back out on the path half way down anyway so seemed a bit odd. 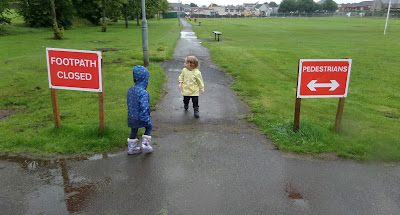 They decided to play on the skate ramp.

So we went home and the three of them were stripped totally and had a full change of clean dry clothes. But well worth it for the fun they had. Really need to get them waterproof suits again as they have outgrow their others.