Have been doing more reorganising with the bedrooms this week. My old sewing room is now gone and the space is child safe again and the toys are all moved into cupboards in there. All my sewing stuff is in the loft along with my sewing machine.

Also won two giveaway's this week. The sender of the first one makes hand made cards so she included a beautiful card with her prize. A very lovely gesture. The other one from a fellow blogger.

This sign always makes me smile when I see it, quite apt outside an A&E dept. Have to say the sunset was lovely tonight from the windows on the top floor of the hospital which sits high up on a hill. But no way of photographing it during working hours. 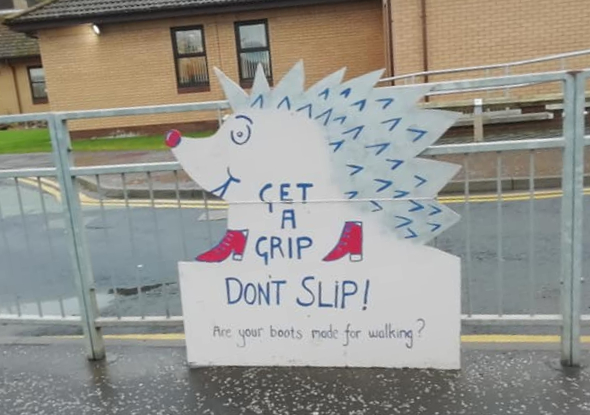 A walk round the fishery with the dog just before it got dark. No filters just as it came off the phone. 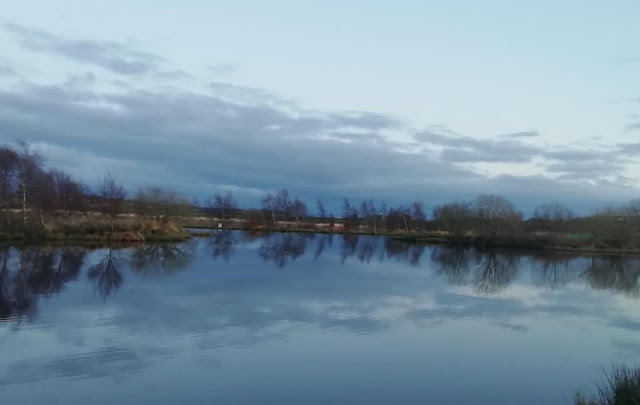 I had to have a 24 hr ECG, this is one of the tests ordered by the Consultant from when I was in hospital with my black thumb a few weeks ago. Unfortunately I took an allergic reaction to the stickers and have ended up with an itchy allergy rash all over my chest, most uncomfortable. Could feel it while they were on and did have permission to remove them if I wanted, but I thought the damage was done so may as well keep it on the whole hours rather than possible not getting a good enough result and having to have it again. 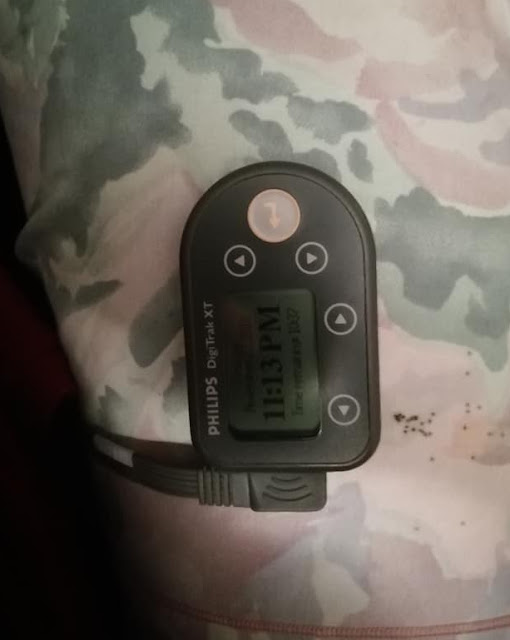 My birthday, thankfully the last one in the family before Christmas. DD1 and Bob came round with my birthday cake and a card. I am sure they got the number wrong, that first one should be a 2.  DD3 bought me a replacement battery for my laptop, the other one was knackered which was annoying when I wanted to print anything as the printer is upstairs so meant shutting down the laptop to take it up and then switch it back on once plugged back in, and the same for back down. DD2 assures me she bought a card but forgot to leave it here when she was last down. 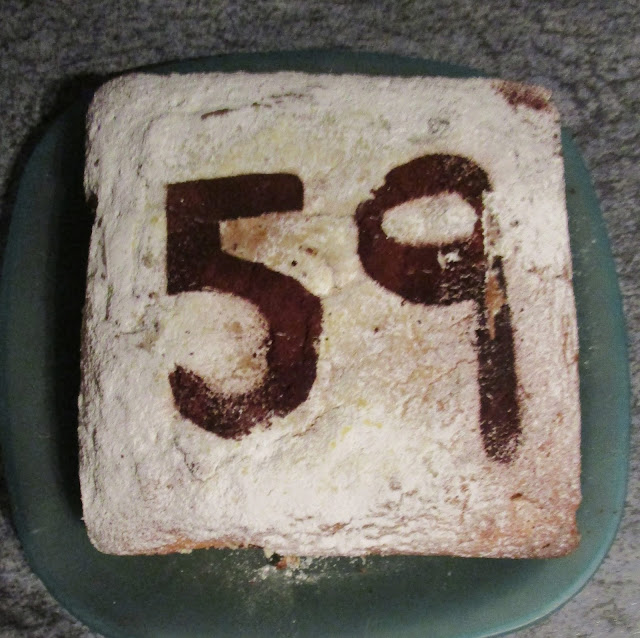 Have worked away at bits and pieces in the bedrooms but today decided to finish getting it sorted. More stuff in the loft, some stuff out of the loft and ready for the charity shop and more of the Christmas pieces found and put into the cupboard ready for wrapping. The stationery drawers have been sorted and the cupboard that came from my mums house has also been emptied. Not really much more we can do until January when we will need to be moving the bed into the back room but I have some peace of mind knowing it is done so will relieve the stress for doing it in January.

A very very flooded fishery for a walk this afternoon after all the rain we have had. The sun came out for a short while but the wind was rather cold.The village was reflected nicely in one of the ponds.

DD1 came up with the three wee ones and Fifi to get some birthday cake and play some games. They share their's with us so only fair. 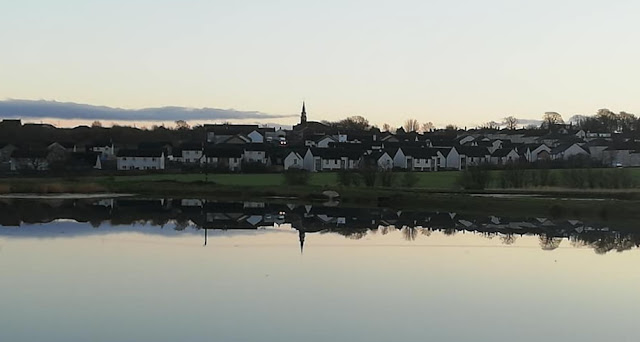 Took Dixie the vet. She has had some bother with her teeth when we first got her and for a 2 yr old dog her teeth were quite grubby looking. They were cleaned when we had her spayed but are badly plaqued up again despite daily dental sticks and whole raw carrots. So she is to go in next Thursday and have one or more out and the rest cleaned up. We are convinced she is getting pain from them.

Took her for a walk round the park and popped in to see an exhibition on pre WW11 planes and the length of the room was taken up with a mock up of a 1930's American airport made out of Lego bricks.

Then dropped off a pile of magazines that I sorted out of our room and then took some bits and pieces to a charity shop. 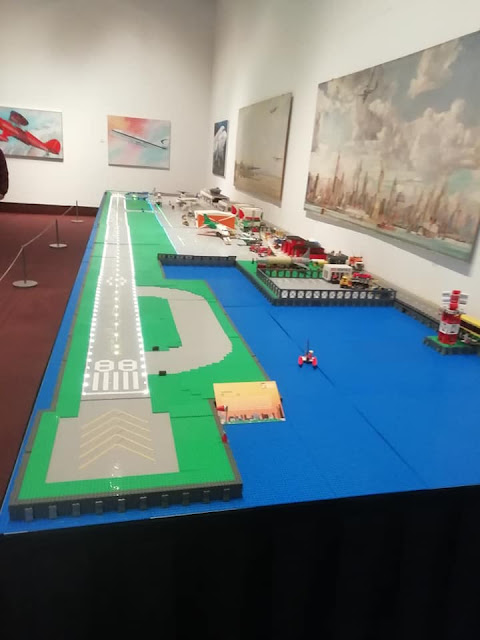 Have been sent two full size bottles of DermaLoch to see if it helps the bad patches on my hands. Better than they were a year ago when they first flared up and took about six months to settle. I am sure it was stress related when I was off sick this time last year but never really gone back to being what I would call clear. A lot of stress coming up in the next few months so hoping it does not flare up again.

My first impression from one small spray on my hand to test I am not allergic to it before I spread it across both hands is it smells a bit like midge repellent. But if it works I can suffer the smell. 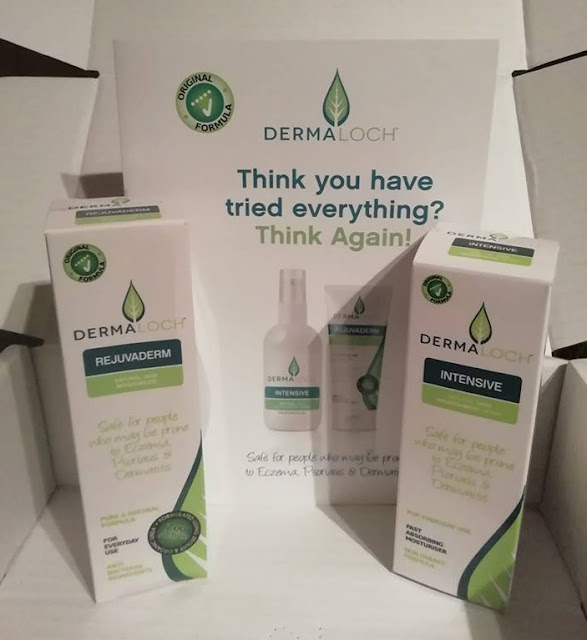