So this weeks tv viewing has consisted of The trouble with Maggie Cole, not to strenuous on the brain but entertaining enough. Finished rewatching Series 1 of Manifest. Also watched three films, TimeTrap - will be ninety minutes of my life I won't get back, Brassed Off which was  enjoyable and Toy Story 4 which was funny in points but not the best of the series but passed a part of the day.

We have had lovely weather all week, red skies both night and morning. The mornings were chilly enough to cause frost on the car, but had lovely afternoons. No rain again this week.

Hubby has spent a lot of this week in the garden as well doing all sorts while I sit with my feet up and knit.

Have seen the grandchildren on and off and Minky reminded me I can't come in as they are on lock down. but I can come in when it is over.

A day at work and a walk with the dog after tea. This was the only picture I took, this one is in  NHS heath care assistant colours, this one went to a colleague at work. I know have four domestic staff dolls done three of which are hopefully going to raise some money for the village food bank, my way of doing my bit for the village. Leaving it up to the leaders of the group as to how they achieve this. The fourth one I am hoping will go into one food bank package that is given to somebody in need as an extra to cheer them up. Not worth anything financially but a unique bit of history as each one is different as I have only made six of them so far so fairly exclusive. 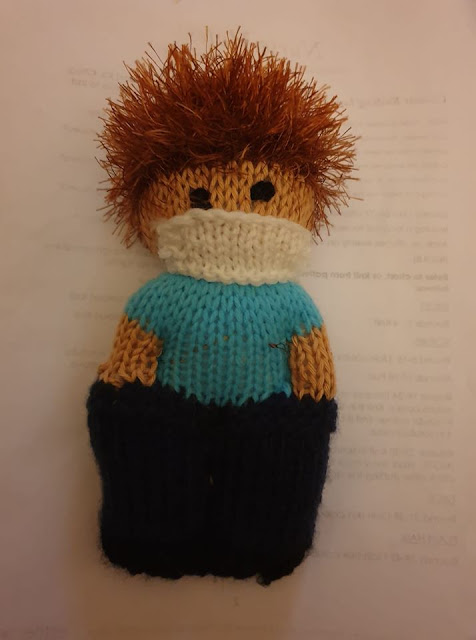 I have run out of three items that should have been delivered with my last repeat prescription. Went to pick them up, pharmacy say they were not ordered, doctors and my online account say they were.So had to get another prescription from the GP so while we were waiting on it being signed, was to allow two hours, so we went a walk along the river.

Spotted a fisherman, first of the year. 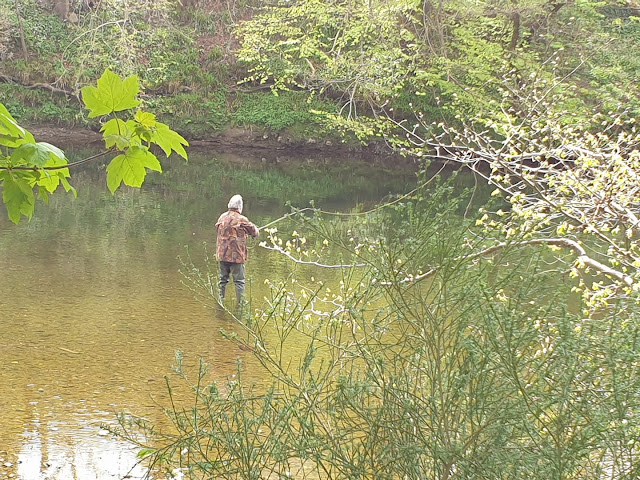 Another day knitting, watching tv and walking the dog.

I planted these back in January and eventually they have flowered. 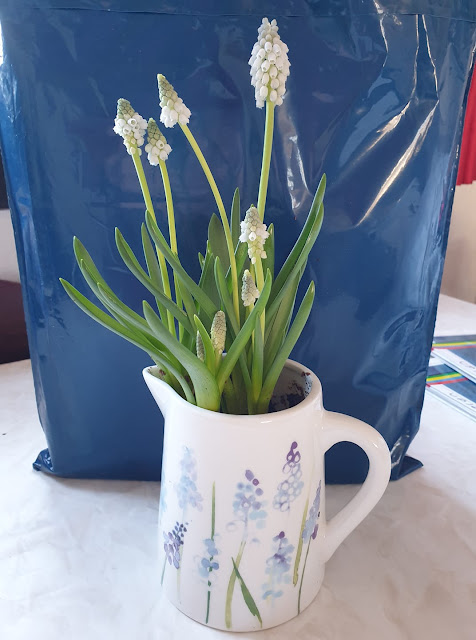 I had sent a parcel to my sister, but put the wrong house number on it, I put 36 instead of 35, the rest was correct, so it came back to us today....surely the postman would know the name and stick it through the correct door.

A walk down the road to the woods today. They have been out ploughing the fields. Sadly the right of way goes through here from the top of the hill but nearly impossible to walk down as the ground is that dry you just sink into it and kick up masses of dirt, not good for the eyes the lungs or the dog.

Joined in with a Zoom chat with the workers and volunteers from the active travel hub that I do the cycling with. Found out that there had been an email to NHS staff offering them use of a bike while this crisis is on, shame I don't get that email as I would love to have had a bike to use while I have so much time on my hands. Sadly they are all away and there is a waiting list......hey ho such is life.

But is anyone has a ebike to spare they are not using while on lockdown I will happily exercise it for you until you need it again. 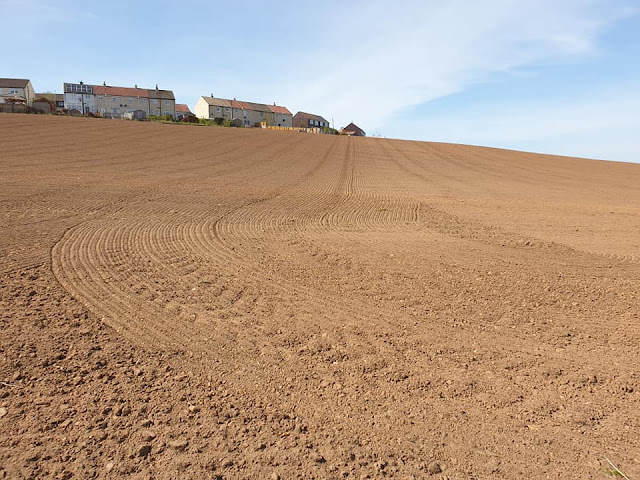 Wandered into town to pick up hubby's prescription, walk the dog and do some shopping for me DD1 and a neighbour while I was out anyway. Neighbour and I were both looking for fence paint but they had none left. While we got out of the car I locked it as per usual and then thought, would swear I put the keys in the side pocket of the rucksack. When we got back to near the car I could not find them anywhere, emptied everything out the bag and shook it upside down, still no keys. Turns out they had missed the bag but luckily for us some very honest person had found them and put them at the wall a few feet away from where the car was parked and nobody else had picked them up and my car was still in one piece. Relieved is an understatement.

I did pop into the big Iceland as I just had to try the black jack ice lollies. I was not at all impressed with them, tasted nothing like black jacks and were ice cream not ice lolly. I thought they would be water ice lollies like the twister ones. 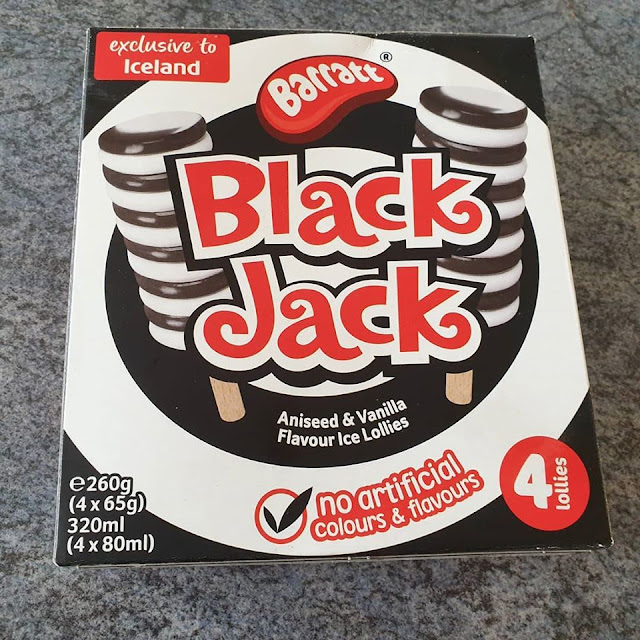 Spent the morning in the kitchen making soup and tea for tonight and tomorrow. Walked the dog in the evening.

This was me experimenting with some knitting. Toyed with the idea of making seven of the jelly babies, one in each colour of the rainbow, but last minute decided to try this instead. Made the smaller one first and then thinking that the NHS is linked with a rainbow now I added NHS and the year to the bigger one. A historic memento of this period in time. Going to make one for each of the grandchildren as a reminder of this time. They may evolve along the way. Need to change the blue of the NHS to something a bit darker. 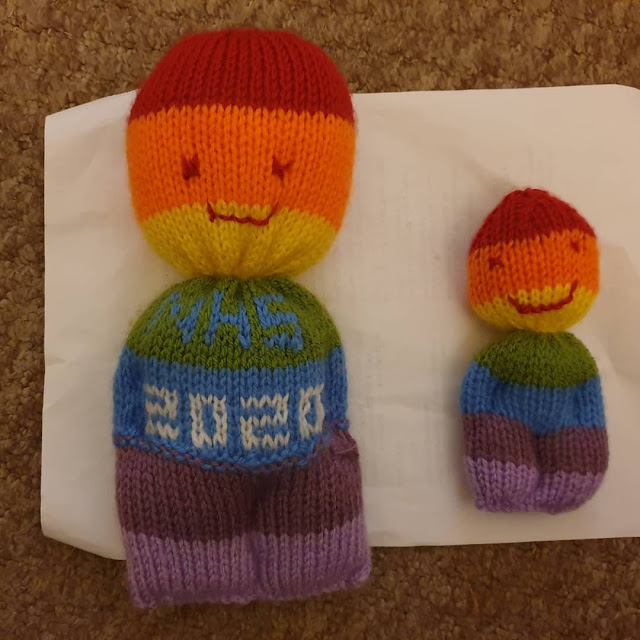 A work day and home to be lazy. 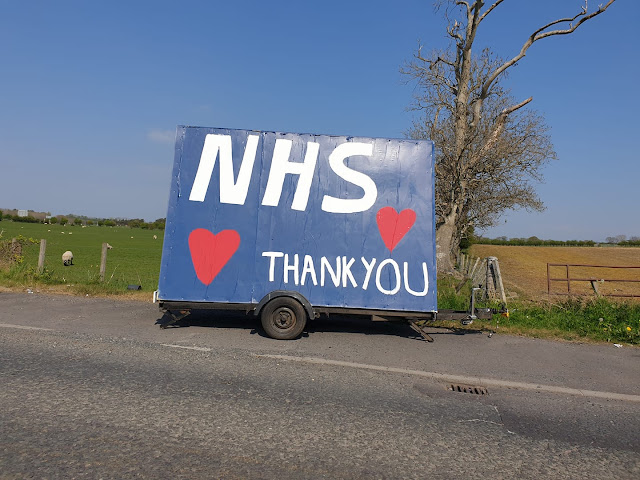 You are invited to the Inlinkz link party!
Click here to enter
Posted by fun as a gran at 07:16