Geocaching comes to Ayrshire and Arran

As my regular followers will know geocaching is my latest addiction. There are worse things to be addicted to than fresh air, exercise, arguments and fun.

Well every year the communities that be put on a series of events somewhere in the UK, and this year it just so happened to be on my doorstep. This has been brilliant not just from a social event point of view but also because new caches have popped up all over the area for us to find.This was the UK's seventh Mega.

The camping site was at Eglinton Park, and we have driven past it many times over the years but never been in until I took the children there a few weeks back. You can read about that here. We will need to go back as probably half the caches there we have not found yet. With various events from tree identification, bird identification, how to take photographs at dusk, bat walks, and others as well as the actually mega event itself. I was being told that up until now it has usually been a weekend event, but this year it was about nine days, spread across Ayrshire and Arran. I have heard a lot of people saying it was the best Mega yet

We attended the Grey Mares and Cutty Sark based at the Burns Museum in Ayr. This involved a guided tour around places Robert Burns wrote about in his poem Tam O'Shanter. Our guide was great as we had four children in our group ( none of mine they were busy that day) and she tailored the conversation to their level.

On the Thursday we had intended taking the children with us as there was a teddy bears picnic on at The Dean Castle country Park in Kilmarnock. But sadly Minky had rotovirus, and if I was in contact with any of them then I could not work in a hospital for forty eight hours, so sadly we could not take them with us.


They had a treasure hunt on for the children, this involved finding various items and taken photographs of them. The picnic was well attended and thank fully the rain held off.

Thursday evening we headed back to Eglinton Park for the duck race. We arrived early so we could also do some geocaching as I wanted the duck race to be my 200th cache. To say the least it rained, thank goodness for waterproof clothing and walking boots, though hubbys leak as his feet were rather soggy.


We headed down to the river for the race, our duck did not finish within the first ten, but the atmosphere was brilliant, and despite a lot of us being on the soggy side it was still a lot of fun.


Love how all the children are shouting for their duck.


On Saturday the actual mega event itself was being held at the racecourse. I was at work until two, so popped along in my break as I have never been to a Mega event before. Sadly it had rained and rained all day and the outdoor events either did not happen or had finished time I got there. While I was there I managed to get the answers I needed to get a Lab cache, A few of these needed following up in a few local sites.There was also a cuckoo cache there as well that I found. This is my first experience of either type of cache as they are rare.

Sadly there was not much else happening, but I did get my picture taken by this lady with the dragon.Had a wander round, spent some money supporting the event as well as next years which is going to be in Essex. 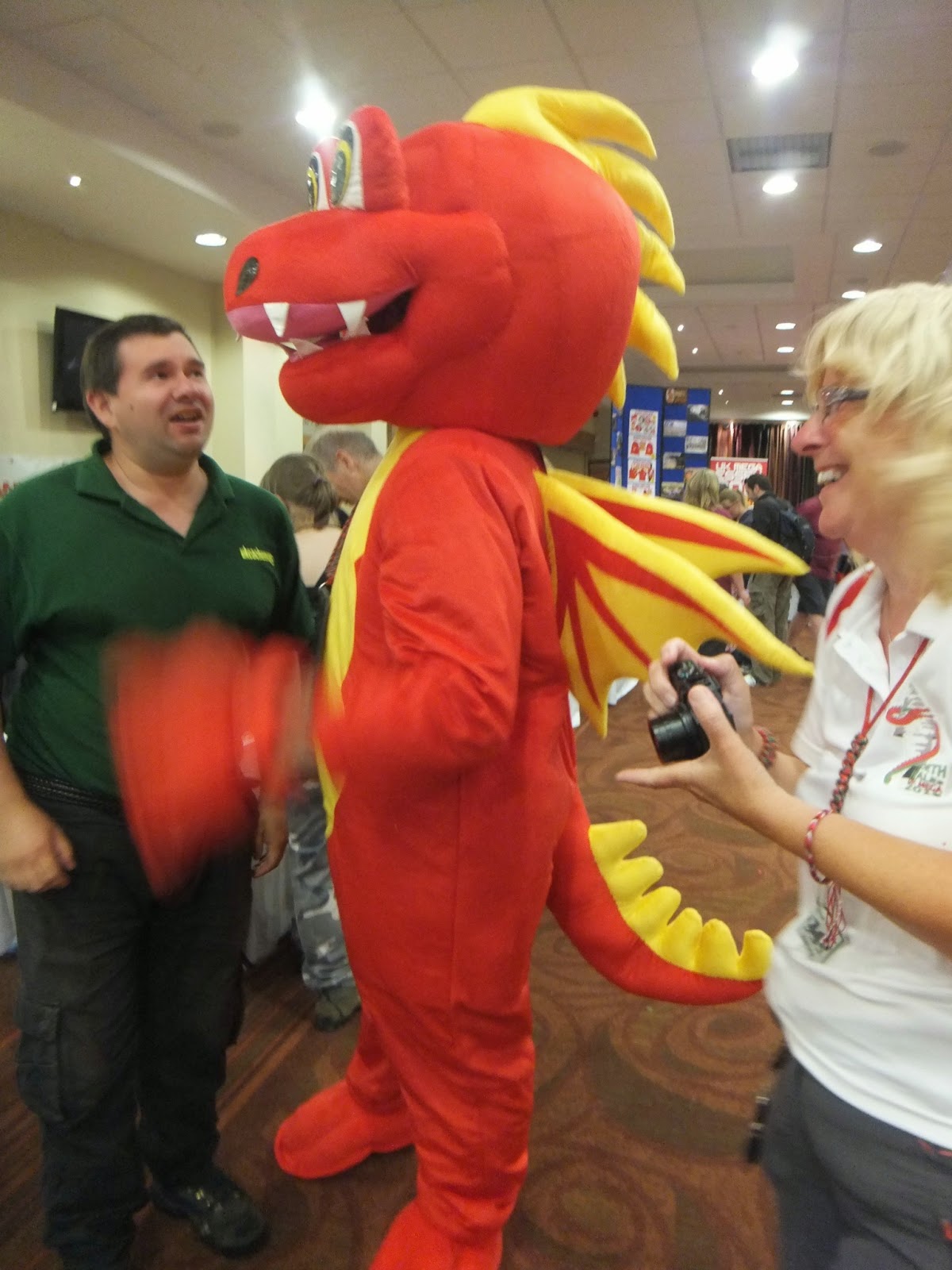 Was a great week, brilliant events and thank you to everybody that helped make it a good week.