I think it is amazing that we as a nation we still want to remember the atrocity that was not only WWI, the war that was suppose to end all wars but also WWII. One of the ways that locally we have a very nice if slightly different remembrance is Rozelle's Remembrance Woodland.

We went for a walk round this attraction today, and I have to say it was nice to see it busy on November 11th.

Rozelle Estate covers an area of 37 hectares in South Ayrshire, which has a wealth of plants and wildlife.

First open to the public in 1968 for cultural and recreational uses, the grounds of the Rozelle Estate combines mature woodland, rhododendron walks, parkland and ornamental ponds, to produce a rich and varied landscape for all visitors.


There has been a lot of clearing going on in the park over this year, and I love what they have done with one part they have cleared.

A poignant and permanent Remembrance Woodland – including a stunning tree sculpture trail featuring wooden soldiers and poppies – is taking shape at Rozelle Park in Ayr as the country gets set to mark Remembrance Day on 11 November.


This is believed to be the only woodland of this kind in Scotland.

These statues are all cut from trees, most of them single piece full sized models, very cleverly cut from trees that were being naturally felled as part of a rolling clearance program, and the impact is quite moving.

So we went for a walk round today to have a look. The first statue you see is a soldier kneeling over a dead friend. 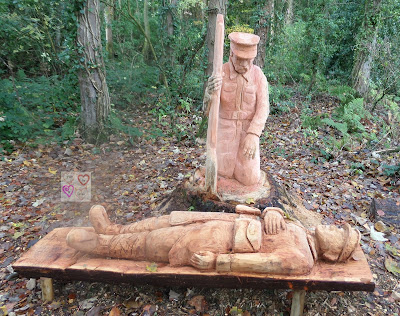 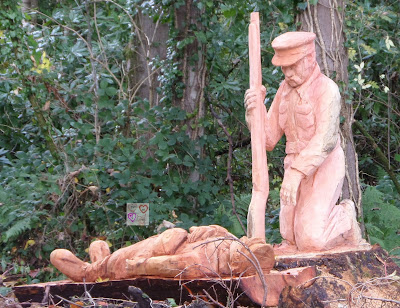 I love the way a lot of the area has been left wild and desolate and the clearing has not been fully cleared, it adds to the ambience. There are paths laid round the area linking up the statues and benches, but I would recommend wellies as it  was quite boggy.


Was quite humbling to be there especially on November 11th.

South Ayrshire Council tell us here that  There are also plans to develop the area in future years to incorporate features, images, and armed forces personnel from other conflicts such as World War 2, the Korean War, the Falklands War, the Iraq War and the Afghanistan conflict.


We did see various trees left up round the trail that will be used for this.
There is a few trenches in the area and it might be quite nice to see one of these actually made into a WWI trench with its edges shored up.

We will need to go back a few times a year to see how it is getting on.