Hi everyone, it's Auntie H here to tell you all about our trip to see Marvel Universe Live! at the SSE Hydro in Glasgow last night. This was Bob's main Christmas gift from Uncle M and I this year.

Background: For Christmas we used to always buy our nieces and nephews a selection box/sweeties of some sort. Now when you have a child like Bob it's a bit unfair for all of the others to receive chocolate etc and not him (bearing in mind it's difficult to get him sweeties that he doesn't already get on a regular basis as his choice is so limited), so early on the decision was made that in his household we would buy a toy for the children instead of junk food. However with such a large family the kids always end up with more toys than they could ever need. A couple of years ago we made the decision that we'd like to make memories with them instead of giving them material items and it has worked really well. We now try to do this for their birthdays too. As a result Bob has been to Treezone in Loch Lomond and faced his fear of heights, he participated in a Summer School week at the theatre (we saw such a difference in his confidence that his mum signed him up for regular classes), Fifi has been to Alton Towers for the weekend with myself, Uncle M and his family, she will also join the Tech Theatre class later this year and the twins will be joining a class at the theatre. We have also promised to take Bob and Fifi to Blackpool to see the illuminations when they turn back on later in the year. (The twins are just a little too young for a weekend trip away as yet) The kids always have a blast and we love being able to do this with them. Making memories that will last a lifetime is just amazing, we really are blessed.


So, onto this years gift for Bob. Now Bob, like most other 10 year olds I know, is mad about superheroes. He loves reading about them, watching them and used to be dressed up as them on a regular basis. When I saw Marvel Live advertised at the beginning of 2016 I knew I just had to get him tickets for his Christmas. I think it's fair to say it was a good choice, he had an absolute ball last night, the look of amazement on his face was brilliant.

We arrived outside the Hydro around 5.40pm and doors opened at 6 so we went for a wander into the SECC where the Irn Bru Carnival is on. I got this picture of Bob outside the Hydro, I think you really get a feel for the scale of the place.

After our wander we joined the fairly long queue that had formed. This went down really quickly as there were stewards directing people to 6 smaller queues where tickets were being scanned. When ours were scanned there was a problem, so we were asked to go to the information desk. On the way through the main doors of the building security guards check bags. We had Bob's emergency bag and a bag of snacks/juice for him. We hit a bit of a snag with Bob's Irn Bru as seemingly sealed bottles aren't allowed in the venue. They were providing cups to decant liquids into however we can't safely do this with Bob due to the potential for cross contamination (fine in the house when it is under our control but who knows who had handled those cups with potential allergens on their hands.) Uncle M took over and handled the situation brilliantly, explaining our reasoning calmly and firmly. The solution was to take the cap off the bottle and let Bob carry his open juice. We were then led to the Box Office where we were given new tickets, and to our pleasant surprise we had been upgraded to better seats. No reasoning was given however once in the arena I could see our original seats had been covered up with black material, I think the sightlines were perhaps not good enough to seat people there without having pre-warned them.

Bob had some Christmas money to spend so he sensibly (after a warning from his mum not to spend it on overpriced nonsense) bought a souvenir programme which came with a lanyard at no additional cost. Here he is perusing it before the show:


We bought some candyfloss which came with a Captain America hat, however it turned out not to be Bob friendly as it had soy in it, so Bob got the hat and Uncle M quite happily munched the candyfloss.

5 minutes before the show started Jarvis announced a safety message. A nice touch, it got a few laughs when he introduced himself.

The show itself was absolutely fantastic. Bob's jaw dropped the minute it started and I don't think it closed again until the end. The story-line was interesting and well performed. It was very entertaining and visually stimulating. Each half wasn't too long, around 30-40 minutes, which was great as there were lot of young children in the audience.

Now's the part where I have to reign in my excitement. The tech in the show was awesome! I always pay attention to the tech side of shows and I was in techie heaven last night. (Uncle M loves to see how things work so he got a kick out of the tech too)

The flying rig was top notch and extensive. It appeared to be mostly automated but some crew could still be spotted on top of the grid, I presume this was to check the carabiners, make sure there were no snags etc A lot of the time throughout the show the cast were clipping themselves on and off of the lines in order to be able to move freely for stunts.
There were massive TV screens that formed part of the set and these could slide open and shut to allow other scenery to be brought on. They were also used to show video/animation for the show which was really cool.
The set itself was brilliant, it was very cleverly designed to allow the crew to set and strike it quickly without distracting too much from the scenes being played out elsewhere. It was also quite intricate and I was impressed with how much of it was hidden in plain sight from the very beginning.
The lighting for the show was great, perfectly timed and well designed. I love a cool laser or two too!
The special effects and pyrotechnics were fabulous. We jumped out of our seats a fair few times with the explosions. They even had Killian on fire to properly showcase the effects of Extremis, it was super cool:

When you put all of this together with an excellent cast, brilliant costumes, awesome stunts (the motorcycles were particularly cool) and a well oiled stage crew it made for an excellent experience. I would highly recommend it to anyone who's even remotely interested in the Marvel Universe. Bob had a blast and was a very happy and tired boy by the end of the night. 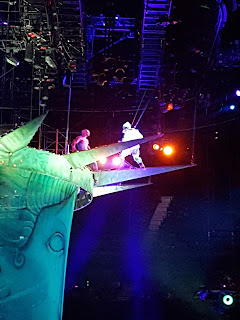 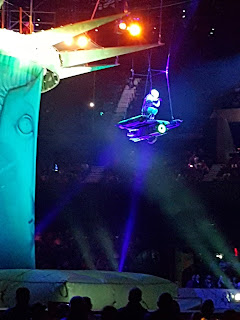 The photo on the left is Spiderman and Green Goblin, the right is Green Goblin on his glider.