You must be getting fed up with my knit/crochet/dog pictures so going to try to do something different this week.I have still knitted/crocheted and walked the dog but my life does consists of other things.
We spotted a second series of Dark on Netflix, enjoyed the first series but was so long ago have forgotten what happened so we watching our way through it again first.

Fed up of taking the same thing to work so rung the changes and took some lacto free cheese spread with these. They make a bit of a mess on the table as some of the seeds fall off but easy to clear up.A nice nutty flavour. These are great as they come in packs of four so stay fresher than the big packs.
A full day at work and hubby spent the day with friend dropping me off and picking me back up from work. 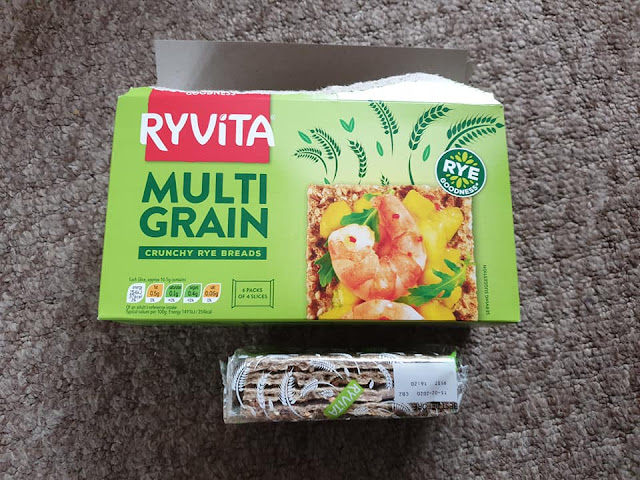 Had some things to do in the town after dropping hubby off who walked along to friends house. I parked the car over a mile away from where I wanted to be and walked in and out.
The large windows of this former shop make ideal reflections up river. 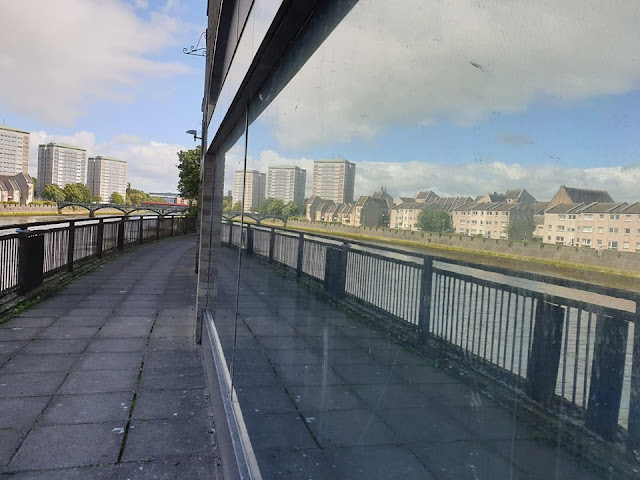 Was feeling rather tired so did what I needed to do in town and then picked friend up to bring him here. They walked the dog down the woods while I did some ironing and then went off fishing, getting back at way gone 11 again.
Made a few baby items for a still born baby.
I am really lazy when it comes to some things one of these things being dry skin on my feet, so I now have one of these to do something about it. 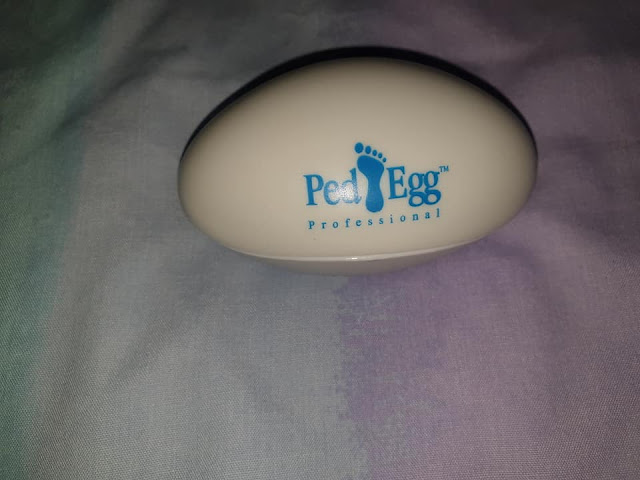 Had a letter to post so after dropping off hubby off I again parked the car over a mile away and walked and posted a letter.
Picked up hubby and friend and we went and did another 2 miles along the beach. We did drive out to Dunure to have a walk there for a change but they are now advertising themselves as a place Outlander was filmed and charging you £2.50 to park on a grassy area that was free in the past. Would not have minded a £1 but totally object to being exploited. So we turned round and came back.

Collected these little yellow shells, just because I could. They were a pretty colour, will find something to do with them. 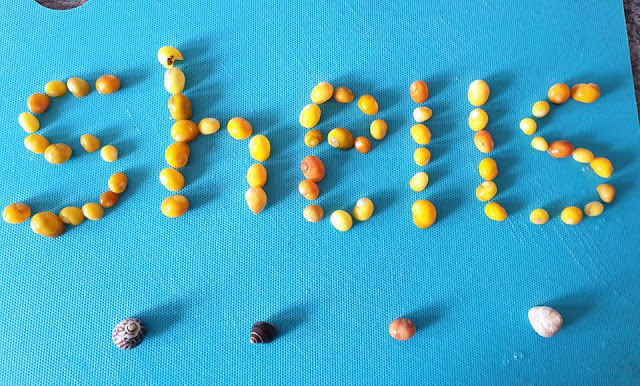 Finished off a cardigan for a friends baby that is due soon.

Took a walk to Failford, not been up there in a while. Met lots of people, always feel it is an area that is well underused. Met a family that moved locally a few weeks back and were there with their four children who were having a ball in the river and playing hide and seek in the woods. We introduced them to geocaching as something else to do with the children.

Made a lamb mince meat loaf for tea with saute potatoes and mixed veg. Blitzed a large onion and a stale roll in the food mixer, add some seasoning and an egg and then mixed through the mince, placed in a square baking tin and cooked in the oven. Enough left for lunch at work one day this weekend. 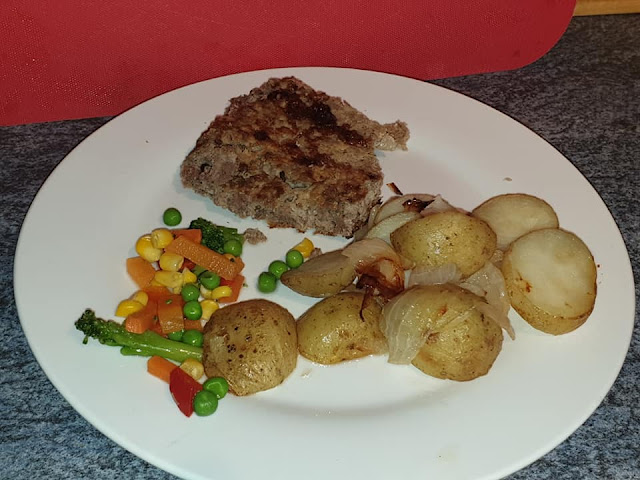 Worked on a crochet gilet for Roo, going to do a matching one for her sister. Finding the crochet patterns easier to follow now and even easier if I relate them to knitting, allows me to see in my minds eye how they should be shaping up.
Facetimed with Ziggy and Roo. They are planning on coming down for a week later this month.

A pile of housework, some blogging and an afternoon of tv and crochet. Watching some old Trial and Retribution, an old Linda La Plante series. More crochet and a wander round the fishery once the rain stopped.Did hang washing out but once it stopped raining brought it back in and threw it back in the washing machine.
I am not  a lover of plain rice cakes but quite like the plain chocolate ones but they were not on special offer this week and it was going to cost £1.50 for a pack of 6, so I bought some spelt cakes for £1, fourteen in the pack and a 30p bar of plain chocolate and made my own cheaper version. Added a few sprinkles for effect. Again handy to take to work for in my break. 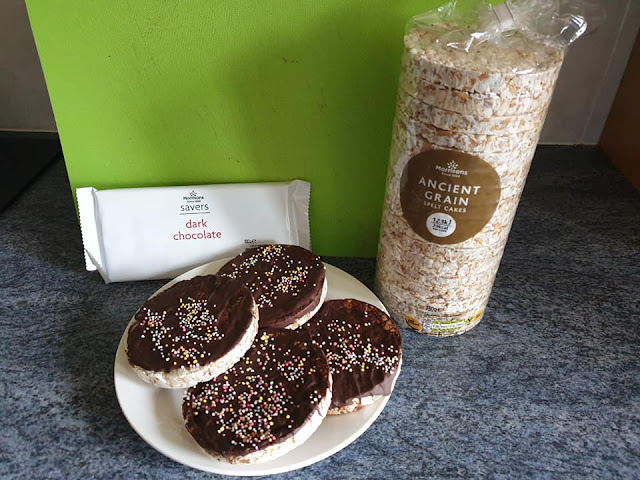 Nearly made it....determined I will have completed the 1000 by next weekend. 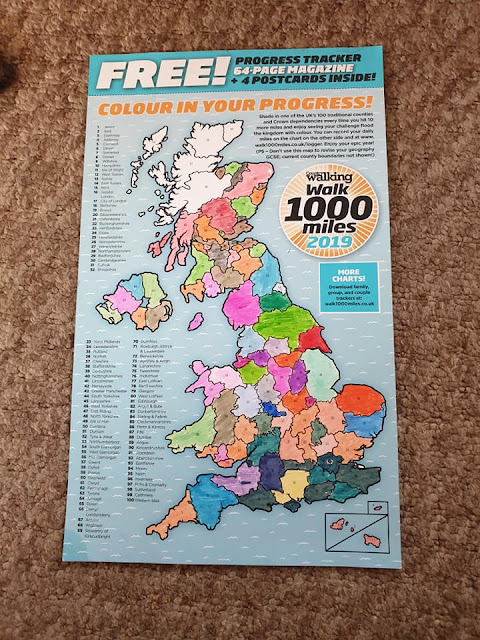 Not seen much of the grandchildren this week, a few short visits to their house for other things.

You are invited to the Inlinkz link party!
Click here to enter
Posted by fun as a gran at 07:00