Sat and finished off Spuds gilet in my break, well apart from the ends that need sewing in.  Tried the triangles for this one but would not use them again. Watching Unforgotten Season 1 at the moment, giving it a try. 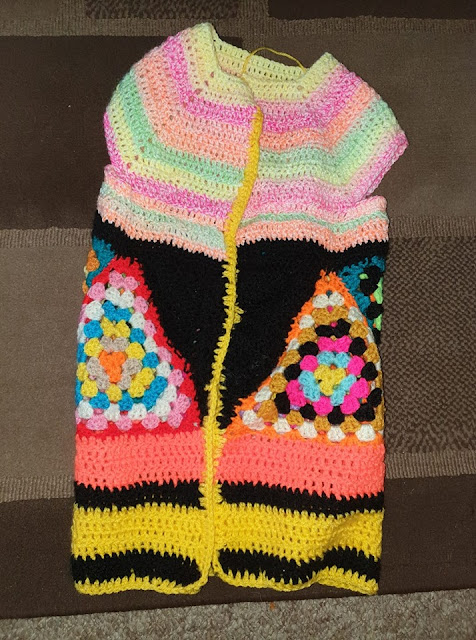 Went into town with the bike on the back of the car intending to cycle from place to place. Cycled from where I parked to my friends house. After my exploits of losing the key last week I decided to use the code lock they had supplied with the bike. But having locked the bike just through the wheels as it was in a nearly secure back garden, try as I might I could not get it to open, so my friend tried and her husband tried but no luck, so having phoned the organisation that supplied the bike they said they often fail and said if I could get the bike back to them they would attempt to open it. So my friends husband ran me back to where I had left my car and I went back and loaded it onto my car and took it back to them. They could not undo it and cut it off. I was surprised how easy it cut off and would worry me if it was my bike that it would get stolen. What a faff. Went out on the biker later on instead.
DD2 was down with Ziggy and Roo for a few days.

Another day that was way to warm. DD2 bought a paddling pool for in the garden. Don't think she realised how big it was and how long it would take to blow up. Gave us a good work out blowing it up!!

Lots of fun was had with the water. Ziggy was showered after tea and then when her mum was getting Roo ready for bed Ziggy went back out and had a lot more fun skooshing granddad back as he was watering her with the watering can. Needless to say she needed dry pj's for bed.

DD3 came up in the evening to see her sister and nieces. After she left I went out on  my bike for a while.

No opportunity to use the bike today, time it cooled down enough and the girls were in bed I could not be bothered. Making good use of the garden again. Nice to see somebody using the garden as it is not a place I sit.

We had a great day. We all decided to go down the woods as it was way to hot to go near what we knew would be crowded parks and beaches. The woods are lovely and shaded. We played various games of hide and seek and tree climbing, on the swings and after they had lunch we played in the river. A blog post will follow.

Got an online delivery for tins bottles and packets as much easier than doing it myself in this heat.Selected a four hour slot and they gave me an hour slot later on the day, cost £1.50 and I could not have driven there and back for that.

Went first thing and got a shopping of fresh meat. fruit and veg and a few other bits.
Down to DD1s for a while as DD2 and the girls were going down and DD3 was down for the day as well. They played water fights and were throwing water balloons and all ended up soaked and chilly despite the heat.

Roo is capable of sitting up now, though she does fall backwards still, hence the cushions. 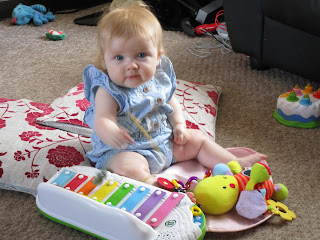 Came back up and gutted the house as only the basics have been done during the week. Spent time preparing meals for the weekend as usual.
Out for a bike ride, 16.28 miles, I just cycled round the back roads with no real route, no matter where I go it is hilly but this week been playing more with the manual gears and depending less on the electric boost. If it had not been as late then probably could have cycled some more. You see a lot more of the stunning scenery and the little things at the side of the road that you do not appreciate as you whizz by in the car.

Was going to share something different for today, had it planned as usual just to do before work. Unfortunately while we were down the woods on Thursday I had been bitten. Saw what it was as I felt it bite me, looked like a horsefly. it wont bite anybody else as I squashed it when I swiped it off my leg. Knowing what I am like with bites I immediately took piriton and four prednisolone. hoping this would stop any allergic reaction as I normally react very quickly. Thought I had got away with it but overnight a reaction came up, very hot, sore, and itchy so little sleep was had. I phoned the NHS24 just after 6 and they phoned me back and gave me an appointment for 8.30. Dr agreed it was infected, a week of antibiotics and rest it for 48 hrs to save the spread and potentially other problems.
So sat and worked on Minky's crocheting, total numb bum syndrome but better that than problems. To go back if it spreads much further than the drawn line or becomes unbearably painful. 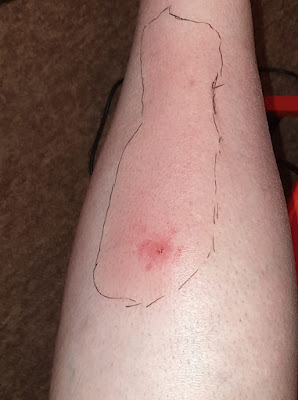