A great alternative for a day out in the heat

A few weeks back DD2 was down with the girls and fancied a joint day out. Sadly this was during the really hot weather we had and living near a seaside town that attracts all the tourists it can often be overly crowded and the beach and beach park are no fun when you cannot safely keep an eye on all the children.

So we decided on a happy compromise, down the woods to a shaded picnic area that also has a nice shallow stretch of river we knew they could safely play in. So we packed up snack food and plenty to drink, popped them all into the car and headed down. DD2 took her car with Roo in it as she did not have a sun canopy for on the pushchair and there is crops in the field that gives us a short cut. There is a walking path down to the woods as it is a legal right of way but not wide enough for the pushchair and it is over a 20 min walk in direct sun to go round the road way. The rest of us walked down.

When we got down there, after helping the wee ones down the slope, we left the wee ones with DD1 while Fifi and I went to get the juice and snacks from the car. DD2 had unloaded them ready and started walking towards us but was to much with Roo and the pushchair for her to manage everything.

We started with a look around. Ziggy is rather funny, if Minky does it she has to follow and do it as well. She is rather brave when she is with him in a way she would not be on her own. Regardless she was coming to no major harm where we were.

After they had done some exploring and playing on the swings we decided on a game of hide and seek.

Fifi helped the younger two cover their eyes and count, though they did amazingly well at the counting both of them.


So ready or not here I come.


Ziggy looking for the others. Now hide and seek with a 2 yr old, a 3 yr old and 2 five yr olds is quite comical. They cannot stay hidden for very long without peeking out from where they are. or shouting out.


But Ziggy at one point stood behind this chair for over four minutes while Dinky looked for her. Despite Dinky shouting for her not once did she pop her head out or shout back. If you play in the house she gives herself away in less than thirty seconds.

We then stopped for some lunch before going to play in the river.


This is where Ziggy amazed me most, following Minky into the deeper water long before the others. I use the words deeper water figuratively, the side nearest us was approx a half inch deep, the deep side about four inches apart from a few small pools that were maybe six inches.


They started off gently throwing in small stones and creating splashes until about two minutes in when Minky decided to plough right in and Ziggy was right behind him.

Ziggy does not have a great sense of balance when walking, and on a slippy uneven river bed she was bound to fall over. She sat down here and was struggling to get back up so this was the pint I got wet and went in to rescue her.

Cue the rest of them in to splash poor old Grandmama which they all thought was hilarious. To be honest it was warm enough I was not bothered.


They managed to get DD2 in as well. 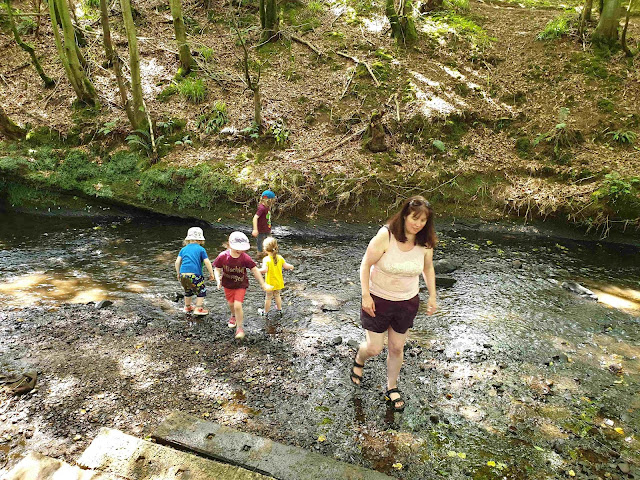 Some of us walked up river to the bridge and the others trip trapped across to wake up the troll. 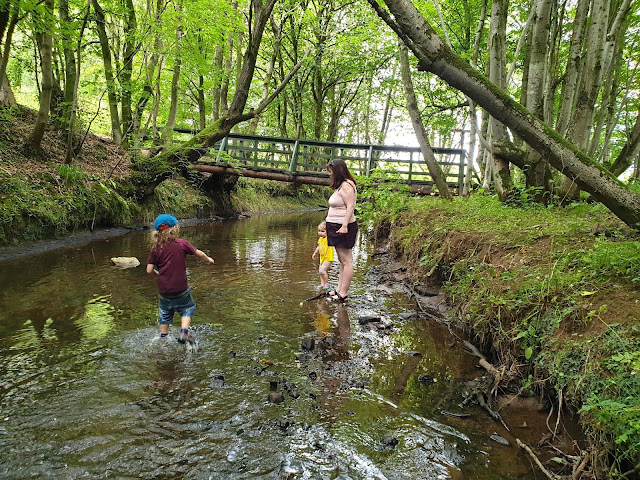 Poor Ziggy had a go at trip trapping as well but got stung while on the bridge. By this time we had been down here for over three hours so we called it a day. Ziggy had dry clothes to get changed into as she was going back in the car/ The rest of us traipsed home wet but happy.

It was definitely a good choice for a day out.