Zippos Circus is currently touring the country and we were fortunate enough to be offered four tickets for the event. Now I have to say it has been many many years since I last visited a circus. I was never a lover of the animals in a circus and back when my children were young the circus was full of animals. So when we were invited to come and see the fun I jumped at the chance and said "yes please"

So not knowing quite what to expect we set off rather excited. Because it was an evening performance and we would not be home until 10 pm we decided it would be to late for Spud, she would never last that late, so we decided to take the young girl next door. 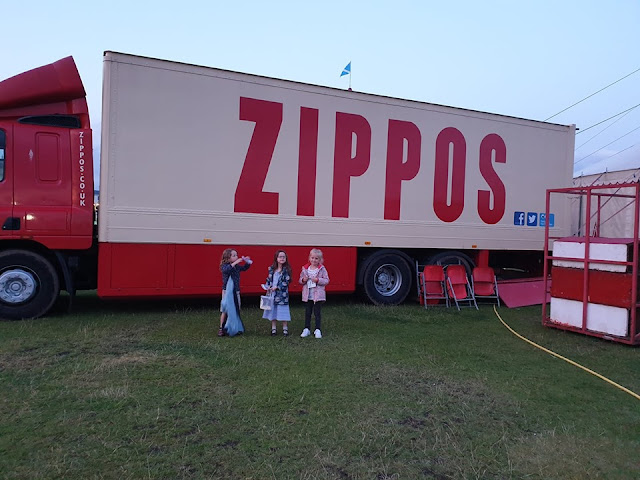 So having picked up our tickets, we headed to the snack van and picked up a bucket of popcorn and some candy floss. These were very reasonably priced and the one bucket of each more than did the four of us, in fact the twins took home some popcorn.  We joined the queue to get in. It was rather busy as would be expected. but the queue moved along quickly as there were plenty of people on the doors, these people were part of the circus routines and no matter what they were doing they looked very happy to be doing it. We were shown to our reserved seats, right at the ring side. We were in a bit before starting time so there was plenty of time for answering curious questions. 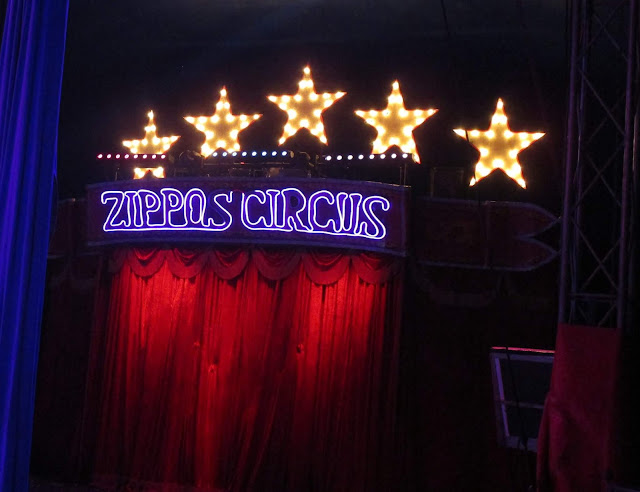 So the main players in the show are the Ring Master, Mr Norman Barrett MBE, and for me the star of the show was Paulo dos Santos, he might only be 3ft 6 inches tall but he has a big personality and is so clever at everything he does, and believe me he does a lot. Dinky spent ages telling her mum about the "wee boy" who got picked on by the man in the big hat, that the "wee boy" was not allowed to touch. The "wee boy" was not allowed to play YMCA, or have the microphone. The show this year is called The Magnificent Top Hat so a very apt title. Once the show started the children were drawn in and enjoyed it all. The show was fast paced with never a dull moment. Paulo joined the whole show together and manages to join in with just about every act. This "wee boy" was amazing and so much fun to watch and listen to. 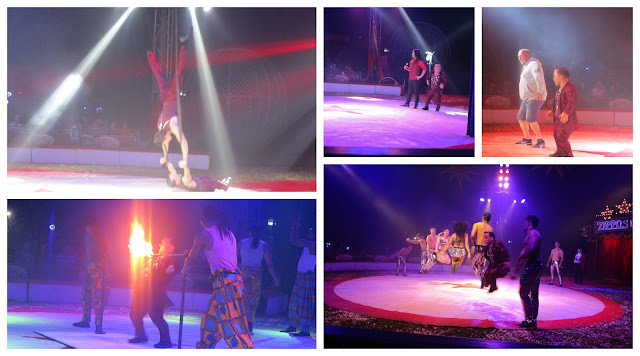 They sat agog as the ladies did their aerial acts and kept thinking they were going to fall. No safety nets were used for an of the aerial performances.  They laughed at so many bits it was lovely to hear. I am not sure how the contortionist, Elbernel Ebby,  got into the bottle but she made my eyes water getting out.  You can see it in the first video.


Just before half time the finishing act was the Lucius motor cycle team, taking their bikes into what looks like a giant hamster ball, from one bike, two, three, four and lastly five bikes. Screaming round at speeds of up to 60 mph. Never really sure whether to hide behind my hands or watch open mouthed. You can see the bikes in the first part of the second video. They made for fantastic entertainment. At half time they were allowing people to get their photo taken sitting on the motor bikes, this you had to pay for. There were plenty of members of staff available during the break to sell popcorn and candy floss as well as different light up items to use in the encore. They all took contactless payments to make life much easier. 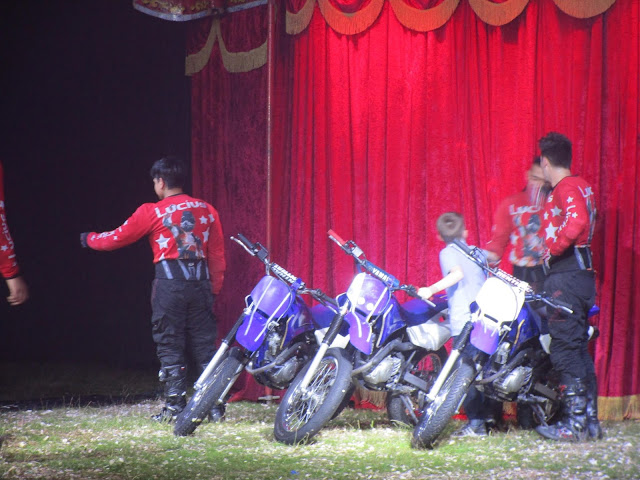 The second half had more acrobatics, dance routines, skipping routines, a juggling act as well as watching them limbo under a flaming bar that got lower and lower. The "wee boy" joining  in and enhancing every act. The children were in awe at Noemi who did an air routine using a net but they were convinced it was curtains and they were going to try it at home next day - that I would have loved to have seen.

The only animals in this circus was Norman and his performing budgies. The three of them oohhed and aaahhhed and laughed as the budgies did their tricks, misbehaved by pushing the car off the table and one of them even flew into the crowd and needed to be caught, not sure if that was part of the routine or not. 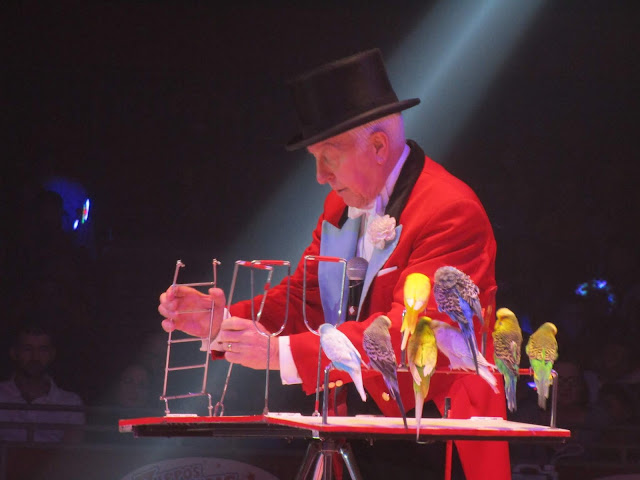 During the whole show there was plenty of chance to sing and clap along to cheer and jeer and I felt the acts fed off of the enthusiasm of the audience as much as the audience fed off what was happening in the ring.

I would highly recommend the show to anyone, something to appeal to all ages and so much going on no chance for them to get bored. A great value day out. To make it even better value I have a discount code - use discount code ZIP50 as it will get them you up to 30% off all tickets. 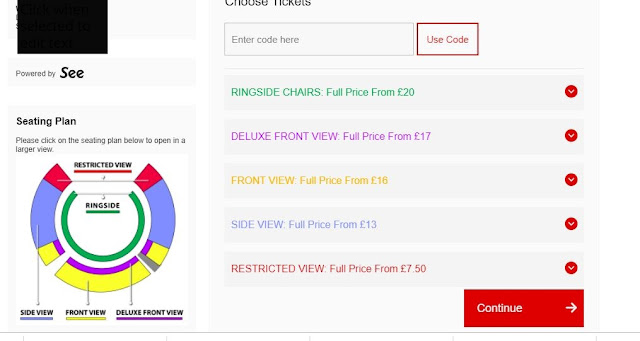 I have added a few videos, extracts from each of the performances, why not have a watch to whet your appetite?


and a montage of photographs

This was a collaborative post. I was provided with the tickets, the snacks and a programme in return for an honest review. We will be back next year. Maybe this can become our annual event with the younger ones in the same way I still take the older ones to the Panto.