One of the girls at work brought a bag of wool in for me as she is not knitting or crocheting at the moment. It is the first I have done for years as well so maybe she will take it up again in the future. She had been hoping to make a blanket for a friend but does not have the time, so I said I would make one for her, in my own style of course.

My plan is one item for the grandchildren, one set of baby items. Some lovely wool here for baby items so there is. 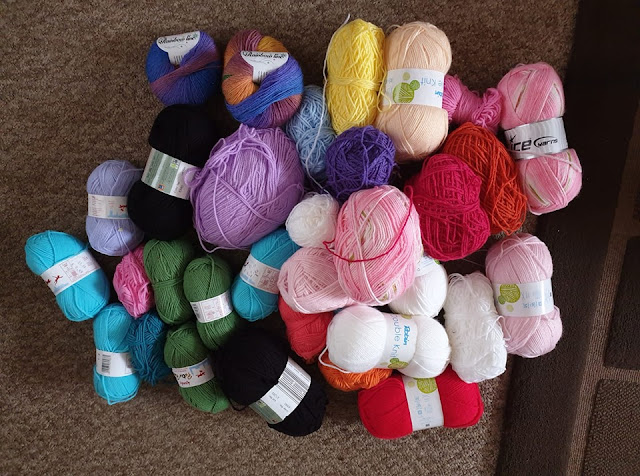 Friend had been dropped off here when his mum headed back home. He wanted to look through hubby's fishing stuff as he fancies going fishing. So as he needed taking home and we needed to walk the dog we just killed two birds with one stone and we all went for a walk along the river before dropping him at home. Was a pleasant  two hours with great weather. 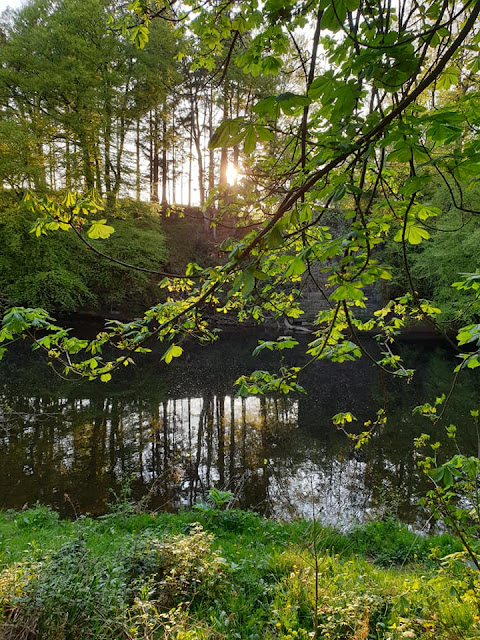 A fairly miserable day for the most part. Fell asleep in the afternoon when I got home, do this quite often in an afternoon.
Spotted this on a bush full of them. 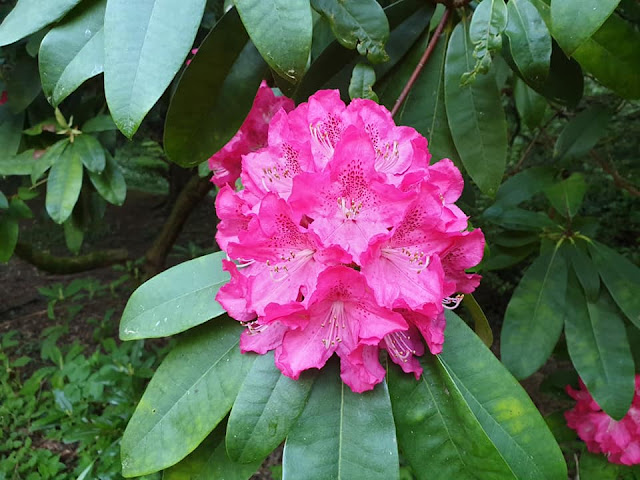 Had a GP appointment, still coughing and my peak flow not as good as it should be. I have some crackling on my lungs so being sent for a chest XRay. Certainly this makes sense of some of the what I thought was muscular pain that I have been getting for a few months. She asked me "do I ever feel like I have a temperature" well yes as a nearly 60 yr old I do get hot but put it down to being the age I am. Same with the walking, I thought the getting out of breath was me just being more unfit than I was.

Picked up friend from Ayr so him and hubby could go fishing. I fell asleep once they went and then did some blogging and knitting and took dog for a walk while I cooked the tea. Did not fancy the tea when we got back so had a bowl of cereal instead.

The sun was going down behind the hill as dog and I walked back into the village. 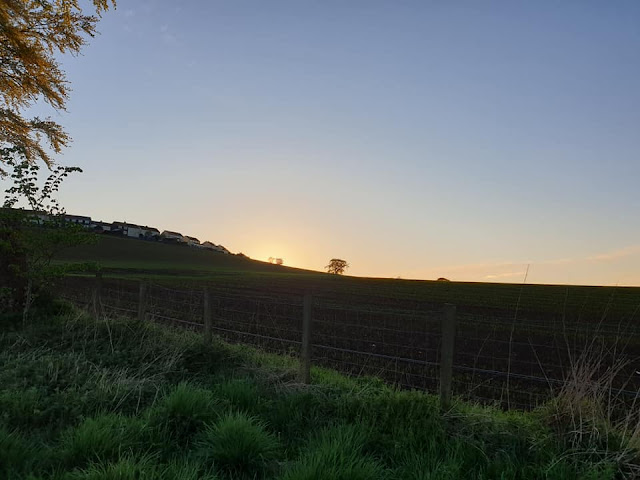 Bob decided he would go to Glasgow and see Trix the T.Rex in The Kelvin Hall it is doing a tour and this is the only place it is stopping in the UK. This is what he wanted to do for his birthday treat. His mum had hoped to take them over Easter but never got chance to with more than one of them being ill.

18 April - 31 July 2019
Step back in time to the Cretaceous period and meet Trix, the Tyrannosaurus rex - one of the three most complete Tyrannosaurus rex skeletons in the world. The 66-million-year-old fossil is the centrepiece of this blockbuster exhibition which also features a range of exciting interactive exhibits.

Glasgow is the only UK stop on Trix's European tour. Don't miss this once in a lifetime opportunity to come face to face with a real T. rex!

We thoroughly enjoyed it, very interactive and informative, I never knew dinosaurs came from eggs, I took it as mammals they gave birth to live young. Would recommend it for about 7-8 upwards but not for younger children. 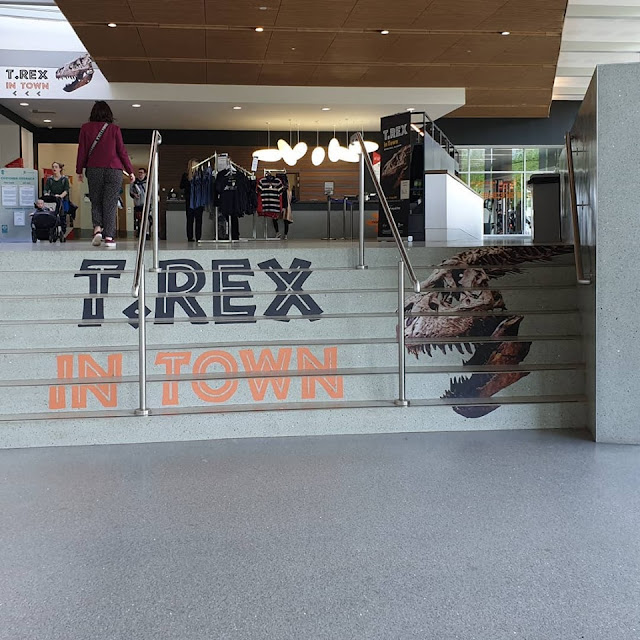 
Off for my chest X-Ray. Picked up friend on our way into Ayr, then went to the hospital, dog got a walk with them while I was in the hospital and then we got her another walk when I was out. They went off fishing again so I got a nice evening watching Scorpion on Netflix while I did some knitting. 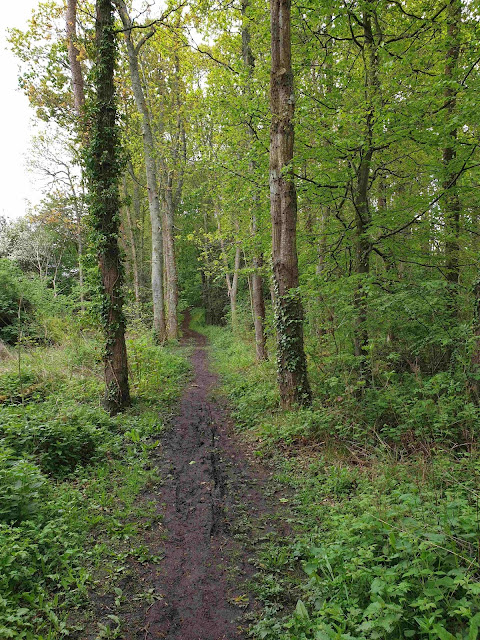 Off work this weekend so decided to go out for the day. I had an appointment to get my hair cut first thing as it should have been done a long while ago but hate having my hair cut.

Went to Leadhills and Wanlockhead, where it snowed slightly, and was rather cold out of the sun. Had hoped to stop at Crawick Multiverse but it is shut until tomorrow. Stopped for another walk at Dumfries House. Find the pain is easier if I take my time and don't push myself as I had been before thinking pushing myself was the right thing to do. The dog had a ball running off backwards and forwards.

Home to DD2, SIL2, Ziggy and Roo here along with the dog for a few days. 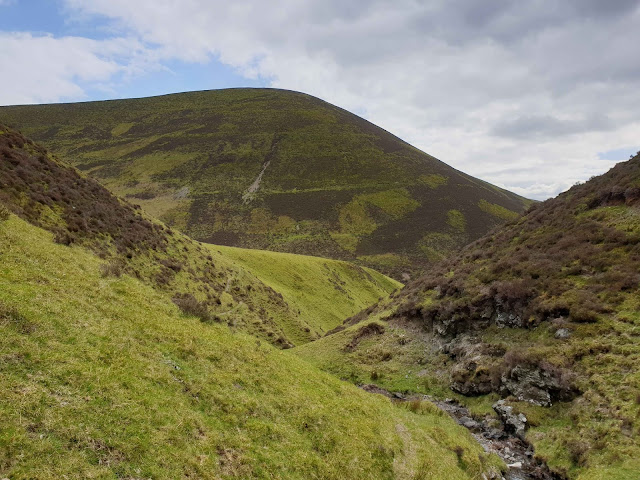 You are invited to the Inlinkz link party!
Click here to enter
Posted by fun as a gran at 21:06