Well this time next week it will all be over, done and dusted and all the stress and money spent will be a distant memory. Merry Christmas to you all for when the day comes. Been a Christmas themed week even for Mrs Bah Humbug here.

Decided it was time I charged up my Fitbit and made it feel loved and wanted again, it has not been on since the start of September.Aiming for 10k a day to start with.

When I had been feeling ill any food that came into the house just got shoved in the first cupboard that had a gap. So now I am feeling better my kitchen cupboards are annoying me. So decided to empty, clean, toss out anything out of date or that has been open way to long to still be edible and organise them again.

Took me over three hours of stop start, still not pushing the arm, and used the stool to reach the higher shelves instead of stretching - job well done. I then did the kitchen drawers as well.

Chucked away the old toastie maker as well as it has lost it's not stick coating. Keep saying I will get a new one - well now I have no choice.

Sees the start of me trying to be festive. Bah Humbug and all that.

Went into town to drop hubby and dog off for a walk and he went into see friend while I did my own thing.

Santa Claus came to town just after 6. Hubby and I wandered down to see them. The local school children did a lovely job with their singing as they toured round the village. Bumped into DD1 and the kids and Minky wanted to come up to play but it was bed time so told him another day.

Hubby took an old laptop down to friends to see if he could sort it, but no luck, needed a few bits and pieces he did not have at his house.

Promised Minky last night I would help decorate the tree with them after school. So I did. In the first picture they are all being stars.

A run into town to walk the dog and do my cheap shopping. Friend came into town with us as we leave Dixie dog at his house and he comes with us to help carry the shopping. It is a longish haul back to the car with one gammy arm. First time they have not had potatoes so will add them to my weekly shopping list.

We then went down to Maybole to drop flowers off at Gran's grave, hubby likes to go every Christmas. Popped into the charity shop while there. it is a small shop that different sections of the community take it week and week about and have to move their stock back out to let the next ones in. We bought a tin for hubby that he liked. spotted an outfit for a local friends wee boy that I really liked and bought friend a pair of padded water proof trousers as he needed them. All items were 50p so all were a great buy. I happened to know the woman behind the counter and she threw me in this lot of Christmas related items for free to give with the food.

Had some Argos vouchers so picked up a new toastie machine and an electric tin opener as I am still struggling with the manual one.

Picked friend and Dixie back up as he was going to have another go at the laptop as he got software from a friend but still no luck. Ran him back and took a walk along the river, the reflecting lights were lovely looking.

Spent the morning sorting out all the food bank stuff that has been handed in by local people ready to take in tomorrow. I added a few bits to the total haul as well. Some of the items the grandchildren have never used and so are still like new, somebody might as well get the use of them.   Did some housework. Decided as it was a nice afternoon we would go and get the bits and pieces of shopping I needed. Not Christmas stuff just normal shopping not buying any Christmas stuff for us. So walked the dog first and then shopped. This was all the local stuff that had been donated.

Went into pick up the rest of the food bank items from the oldies complex I use to work in,and dropped it all off at the Salvation Army and then walked the dog. Friend did not want to come for a walk with us. Went back to friends for some lunch, the bakers next door is way to handy, and then went and dropped off the Christmas related items at the cheap food shop. I added a box of crackers and a roll off wrapping paper that we had not opened and a roll of sellotape to help somebody else out. The crackers were last years we forgot to use.
Also handed a bag full of freshly laundered socks hats scarves and gloves as well as a jacket to a place that collects for the homeless. We have way to many of them lying around unworn as we have our favourites.

While dropping stuff off yesterday we bought our Christmas if you want to call it that, a new pair of slippers each as ours from two years ago have fell apart. We are also having a box of sweeties each. No they are not getting wrapped.
I don't see the point in presents just for the sake of having something to open. 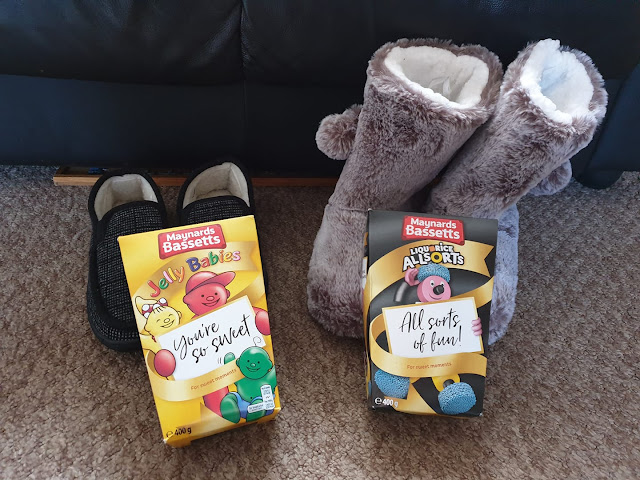 You are invited to the Inlinkz link party!
Click here to enter
Posted by fun as a gran at 12:19