Last spring Bob started having problems with his eyes. We thought it was hay fever  sore inflamed itchy eyes, I think a lot of us can relate to that. The Dr treated it as hay fever but his eyes got worse and worse.

He got to the stage where he could not go out in the sun as his eyes were just too sore, he had bad headaches, and even the lights in the house were causing him pain.

He was seen by the Ophthalmology department at the hospital who tested him and gave him four different sets of eye drops that between them were going into his eyes a dozen time a day, both day and night. The worse case scenario they came up with at this point was his eyes were badly damaged and the chances are he would be blind by the time he was ten.

He was on the eye drops for four months in reducing doses. It was also advised that he should wear dark goggles to reduce the sunlight/daylight/electric light getting onto his eyes and causing him pain.

After more tests they have come to the conclusion that he has  Atopic Keratoconjunctivitis (AKS).

What are the symptoms of AKC?

The symptoms of AKC are initially very similar to those of allergic conjunctivitis, although much more severe and include more sensitivity to light, blurred vision and a thick, stringy discharge.

What are the complications of AKC?

Because AKC can affect other structures of the eye, such as the cornea, cataracts and scarring can form, and blindness can occur. People with AKC are also at increased risk for infections of the eye, including certain bacterial and herpes infections. 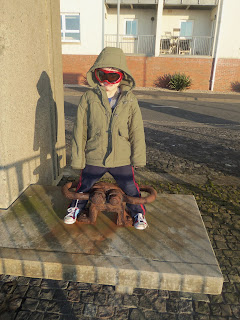 Bob is improving and now is down too one set of eye drops ever second day. This will need to be juggled up or down as circumstances change. There is some improvement in the damage to his eyes, and here is hoping the damage does not get worse. 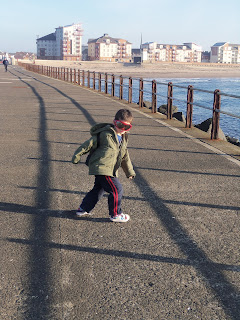 Whenever he goes out the house he needs his goggles on to keep out irritants, and is quite happy to wear them as he knows it helps him.


All the pictures that we take outside of him will now have his goggles on so I thought I would write this post in case you were wondering why he has them on.


He manages not bad with them out in the day time but does struggle to see edges of pavements and such like when out in the dark.