I am pleased to say that my biscuit was chosen by Sainsbury's as one of their favourite five and was voted as the best of the five by Sainsbury's followers. No prize as such involved, just the pleasure of having won. 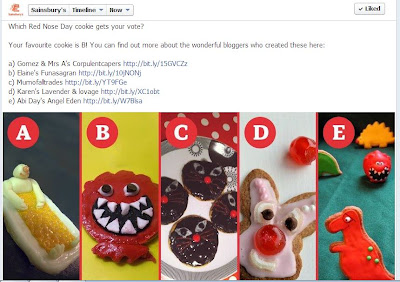 I got this in a challenge from Sainsbury's

To celebrate the 25th anniversary of Red Nose Day, we’re challenging you to design a Red Nose Day cookie. You can either use a cookie recipe from the Live Well For Lesswebsite, your own recipe or just buy one – the main focus for this challenge is on creating an amazing design.


Well my plan had been for Bob and I to make biscuits yesterday when he was here and to have fun decorating them today, Sadly Bob is not well, he was at a 50th birthday party on Saturay night when they set off a smoke machine, no problem for normal people but quite nasty for people like Bob, so he was too wheezy and unwell to want to leave his mum.

So as we had to have this blog post up by the 27th of this month I had no option but to do them myself. I decide as the main challenge was in the decoration rather than in the actual baking I would just decorate some rich teas that we had. I had already bought some coloured ready to roll icing to use.

First off all I looked for inspiration. The designs that are in this year for comic relief red noses are dinosaurs, so I decided to try and replicate dinomite, you can see the image here.

First of all I rolled our red icing and cut out a circle with bumpy bits for the hair and a place for its feet. Next off I made the feet. 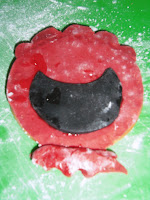 I cut a black circle and chopped the top of for the mouth, and then cut out white triangles for the teeth.

I heated jam and used a pastry brush to brush the jam onto the back to allow the pieces to stick together. I had to strain mine with a tea strainer as I only had a seeded jam.

His eyes are made from white piping icing and a chocolate drop. 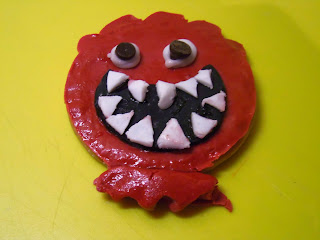 Here he is in all his glory. The biggest problem I found was using icing sugar to roll out the icing meant it had white blemishes on. I brushed it with water to remove it. 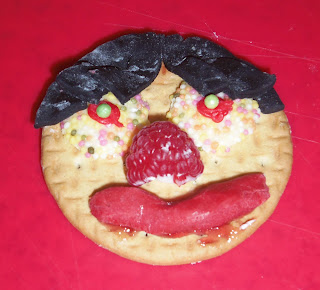 Next up I placed rainbow drops for eyes held on with piping icing, made his eyeballs from a red icing pen and a green sugar ball, held on a raspberry for a nose with piping icing and rolled up a piece of red ready to roll icing for the mouth.
Cut a semi circle in black rolled icing and cut it into six strands, and parted three to each side to create a fringe. 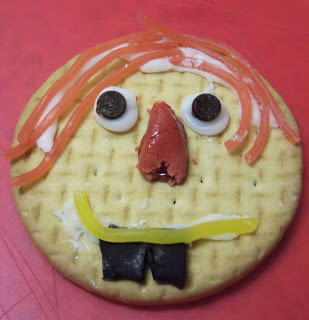 Lastly I piped icing round the top of a biscuit and stuck some pieces of coloured liquorice shoe lace as hair.
Piped white icing and a chocolate drop for the eyes. Red rolled icing for the nose, stuck on with jam. A  lace stuck on with icing for the mouth, and rolled black icing to make the teeth.


I made these simpler ones as they were fun and these are more manageable by children if other people are looking for ideas, and by using odds and ends from the cupboards these are probably manageable for most people.

Sainsbury's added to their e-mail

As a bit of further incentive, we’ve got 10 x £10 vouchers for members of the blogger network to cover the costs of the challenge. We will pick the 10 bloggers at random, and not base it on first come first served. Please email me saying you’re interested in the cookie challenge and please provide your address.

I was fortunate enough to be one of the ten chosen, but I had already agreed to do this post regardless. The creative ideas are all my own.