I am a member of the Collective Bias®  Social Fabric® Community.  This shop has been compensated as part of a social shopper amplification for Collective Bias and its advertiser.

I saw a blogging opportunity to make a healthy family meal. The full criteria was;


Your blog post should focus on creating a meal for all the family that is not only healthy, but that costs less than £10 to make. We’d like to hear about any tips or tactics you have for saving money on your food bill generally as well as how you put together your budget healthy meal.

I have to say for me in my house £10 is not really a budget price, it is more than I spend on one evenings meal, but then there is only two of us. So I happily took up the challenge. I further had to add to that challenge as to make it a "family" meal I had to ask the "family". To make it for my family it had to be wheat/gluten/egg/dairy/nut/soya free. But I like this challenge as it can show to people that having multiple food allergies is not unmanageable and does not have to be expensive.

I put some thought into my shopping before I toddled off to Sainsbury's. I chose Sainsbury's as I have a nectar card and any shopping I do adds points onto my card. I also like their huge fresh fruit and vegetable aisles.

I had decided that I would look for a meal that either used the oven so that I could add a sweet to the meal and utilise the oven by cooking a second sweet for the following day making economic use of the oven. Or alternatively something that would go in my slow cooker, again this is in keeping with the budget idea as meat suitable for cooking this was is usually the cheaper cuts. This I would have used with a fresh fruit salad or a rice pudding done on top of the cooker.

Having a good look round the store I decided upon oven roasted vegetables with cooking bacon. I liked this idea as the cooking bacon is always a good low price at £1.10 making it a very good buy. I wanted something that people could replicate and so decided for that reason to avoid meat or fish that had been marked down in price. I then went and had a good look round the special offers in the vegetable aisles before making my final choice.

I purchased a leek, some sweet potatoes, an aubergine, parsnips, and they had some reductions which I made the most of, some baby potatoes, a pack of spinach and chard and some runner beans. I felt this was ok as most supermarkets have reductions on in their fresh aisles most days. As you can replicate this recipe with any vegetables, no hard and fast rules on types or quantaties.  I did not think that would matter.

I then looked round the aisles at something I could use to make a sweet with. First off I saw a pack of conference pears reduced, and decided on a apple and pear crumble so bought some seasonal  apples to go with them. This I decided would make a crumble, so also went and bought a tub of sunflower margarine and a bag of flour. My plan at this stage had been for two crumbles, one with normal flour and one gluten free.

So I paid for my purchases, remembering to use my Nectar card. The bill came to £10.83. This was technically over budget but I knew I had more than enough food here to make meals for two nights with a few items from my cupboards.

So I went home and phoned my daughter and invited her, her OH and the four children round for tea. This makes a nice break for her with the twins only being seven weeks old it would save her worrying about it. 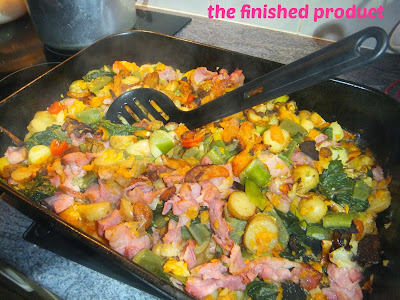 I set to work when I got home. Firstly I peeled all the vegetables and fruit. Then as I was going to be oven roasting them I used my food processor to slice all the root vegetables to the same thickness, sprinkled them in sunflower oil and flavoured them with garlic salt and chilli pepper.


I sliced the pears and apples and brought them to boil on top of the cooker before putting three quarters into a pie dish. I sprinkled on some sultanas.  I had planned on making two separate crumbles, but I remembered I had some gluten free crumble already in the freezer. Crumble is a great item to make in bulk as it freezes in its raw form and is use able straight from the freezer. So I just made the one for everybody to eat.

I brought a pint of rice milk to the boil and added pudding rice ( from my cupboard) and stirred in the rest of the apples and pears, and added this to the oven at the same time as well. This is being added to provide a sweet for the second day. 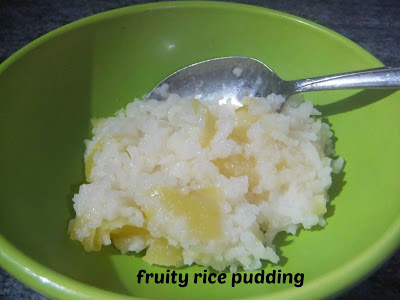 At the same time I used the last quarter of the bacon  to make a stock for soup, and boiled it along with some lentils. Once the vegetables were cooked I added some to the soup and roughly puréed the mixture. 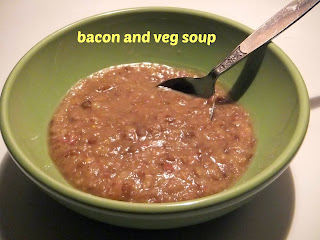 After we had eaten our main course, I made rice milk custard to go with the crumble, some of them chose to have tinned custard. 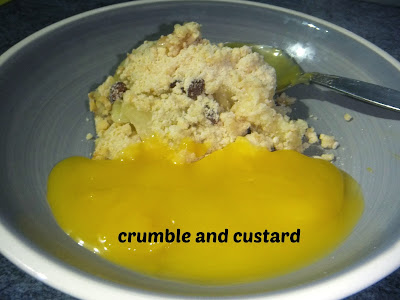 My total spend was £10.83 and I used some lentils,  pudding rice, a litre of rice milk, custard powder a handful of sultanas and a tin of custard from my store cupboard. I did not use the flour or the margarine at all so they will be there for another day. These two items cost me £1.85.  But we did get two days meals out of it, so I would say it fulfilled the criteria.

The soup could also have been frozen for one day when you knew you may be busy and it could just have been defrosted and reheated when needed, this may save the expense of a take away one night.


You can see more of the stages and photographs here