Well we are in to week two, the photo opportunities have been many and varied this week and I have had to choose which pictures to use as I feel I had more than one decent picture theme on most days. Some weeks I struggle to have one picture on some days, not sure which is worse really.

A walk along the river. This follows on from the storms we have had. This is the debris built up at the bridge just past the dam. Guess it must be the way the water flows as this is the only pillar with debris attached. The river was touching the bottom of this bridge the other week, masses of cubic feet of water.

Went for another look at the beach, I find a storm on a beach quite therapeutic in a weird sort of way. This man along with others was making the most of the storms of the previous week and filling his trailer with free wood. If you have a zoom in to the picture, the wood has just left his hands as he was throwing it up onto the road side. It was still a very stormy day, you can see the sea battering over the wall behind him if you look.

The remains of breakfast in bed, brought to me by my dear hubby. Hard to think that we have been together for twenty years this week. Daughter No1 reminded me that this is more than half her life. For daughter No 3 it is four fifths of her life. Some days it seems a lot longer other weeks it seems no time.

Walking along the river path and over the bridge. I spotted all the padlocks and said to hubby " I wonder why people put padlocks up?" so he informed me people put messages on them. I never knew that but here are two put up by the same people.

Never got Bob till nearly six tonight as he had his annual appointment with the allergy specialist and the dietician. Bob is now officially  labelled as  "malnourished". He has always been labelled as "failing to thrive" but this is one step beyond that. He has not grown at all in the last twelve months, and only grew one centimetre the year before, he is now twenty five cms smaller than he should be. He has also lost half a kilo in the last year, not a lot in itself but must be something causing it.  They are thinking internal damage stopping the nutrition from his food being absorbed. He has now to be fed a high fat/high carb diet. He also saw the dietician who tells my daughter she has no advice for her (again). If the experts cant work it out how are the parents suppose to? My daughter feels really bad about this but then its not her fault.

Friday
The twins now go to toddlers on a Friday morning, only because my daughter runs the toddler group. Here is Dinky with one of the mums. The twins were away for their hip scans today as they were born breech by section, thankfully all is well with both of them.

Last week I was amused by the bear on Casualty that was sitting under a spot light with a pair of sun glasses on. So here is hubby's version of that. These bears sit half way up the stairs with the floor lamp on the right. 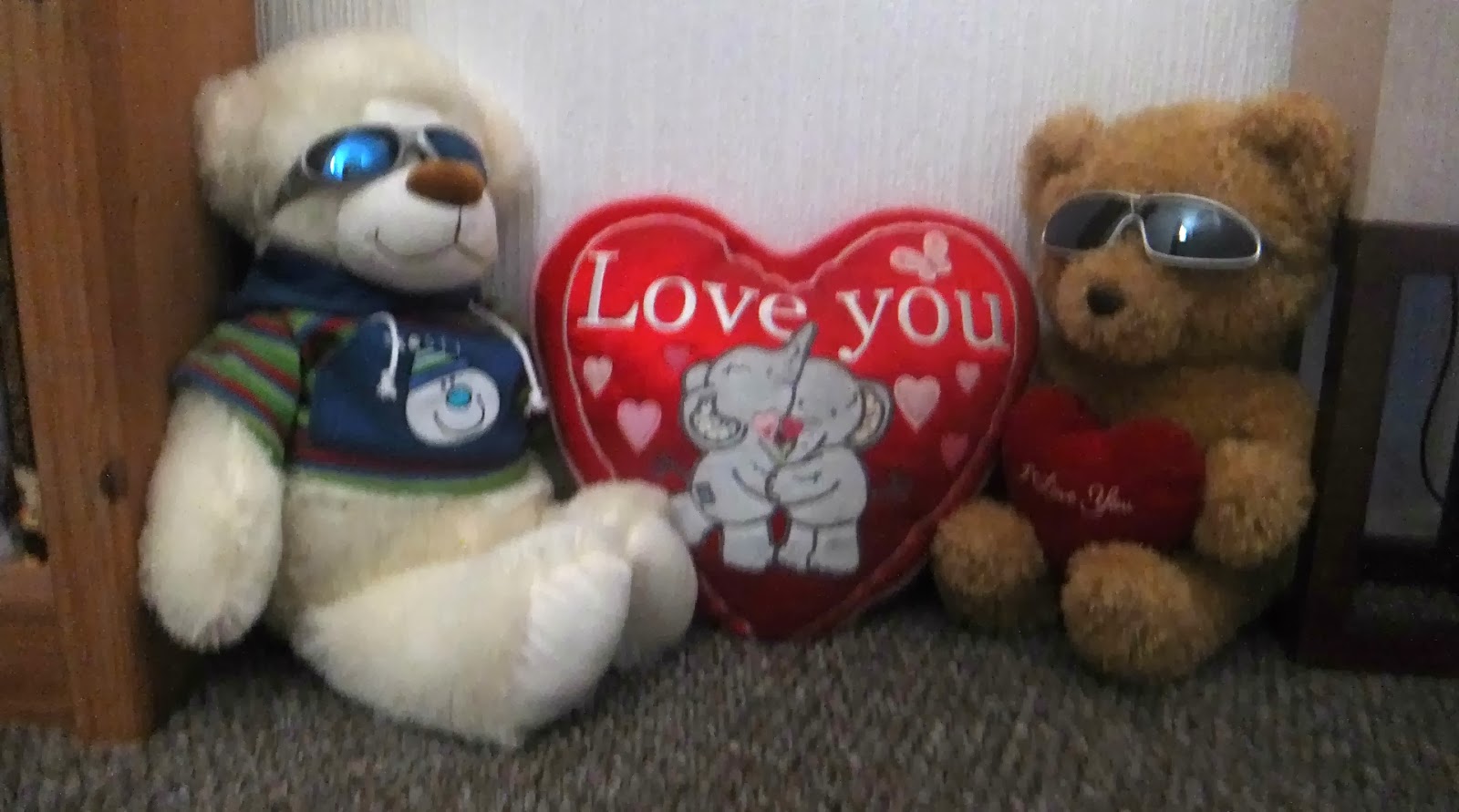