When you are dairy free it is nice to find alternatives. There are quite a few out there I can have but very few Bob can have, He has been soya free for a while now, and the main brand of oat milk has taken to making nut milks in the same factory so that rules that one out as well. So it leaves us pretty much with coconut milk, which both him and I love.

We had a discussion last week about trifle, Fifi was going on about loving them, she had made one at school in her cooking class, and mum had bough her a few of the packet mix ones to make up at home, so Bob has decided he wants to try trifle, and wanted  me to make him one. If he wants something new its always grandma that gets the fun of experimenting. He is also more likely to try it if I make it than if mummy does as he can be funny with new food, even of he did ask for it. He has had jelly in the past, and he has had hot custard with cake and things but that does not mean he will try it cold.

So I had some Rhythm coconut milk in the fridge waiting for just such an occasion, and so Bobs first trifle came about.

Naturally delicious coconut creations with no added sugar – 100% coconut, nothing else
Our Virgin Coconut Milks are made with fully mature coconuts (usually ripened to around 9 months) and are bursting with the incredible, naturally sweet coconuty taste of first-pressed virgin coconut milk.
As we  cold –press the  fresh coconut meat to create the virgin coconut milks  they are  abundant with virgin coconut oil , in fact 26g as  per 100g of  the milk .Made  without the need  to dehydrate the coconut to capture the oil ..This means you get the benefit of the whole plants phytonutrients  that are present just as nature intended
Sourced from the beautiful, bountiful Philippines – home to many different kinds of coconut – we’ve carefully selected the best types (including an amazing naturally-reduced fat variety) to create two delicious delicacies… 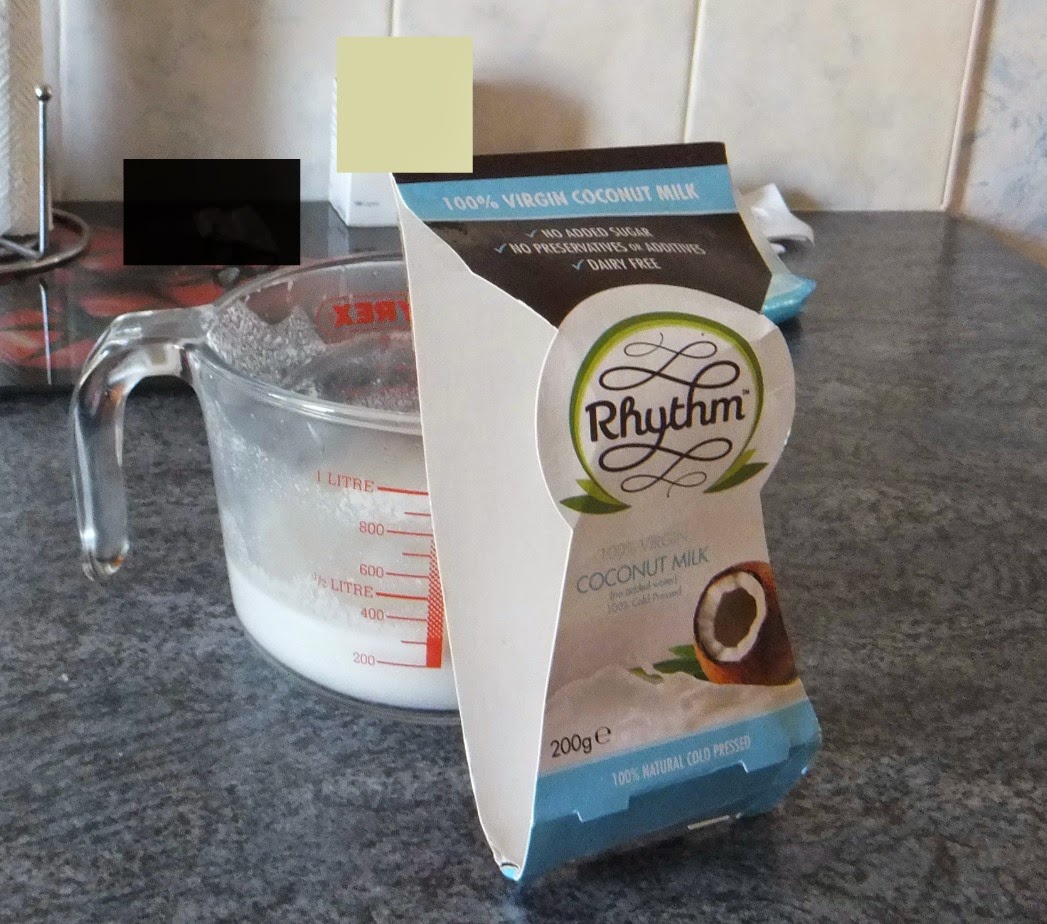 So I opened the packet, the milk is fairly thick, is beautifully meaty, with a definite texture both to feel and taste. To allow me to make custard and a milk shake I diluted it to make a pint, and it still had more than enough "milkiness" to it.

Firstly I had some ripe bananas sitting so I made some into a banana milk shake, a great healthy and tasty drink and as Bob and I can only eat bananas either puréed or cooked its an easy way of consuming them.


Next off was the trifle. I phoned Bob and asked him what flavour of jelly he wanted, he picked lemonade - well he actually picked blackcurrant but I didn't have any. So I made the jelly and added some tinned mandarins and popped it in the fridge to set. 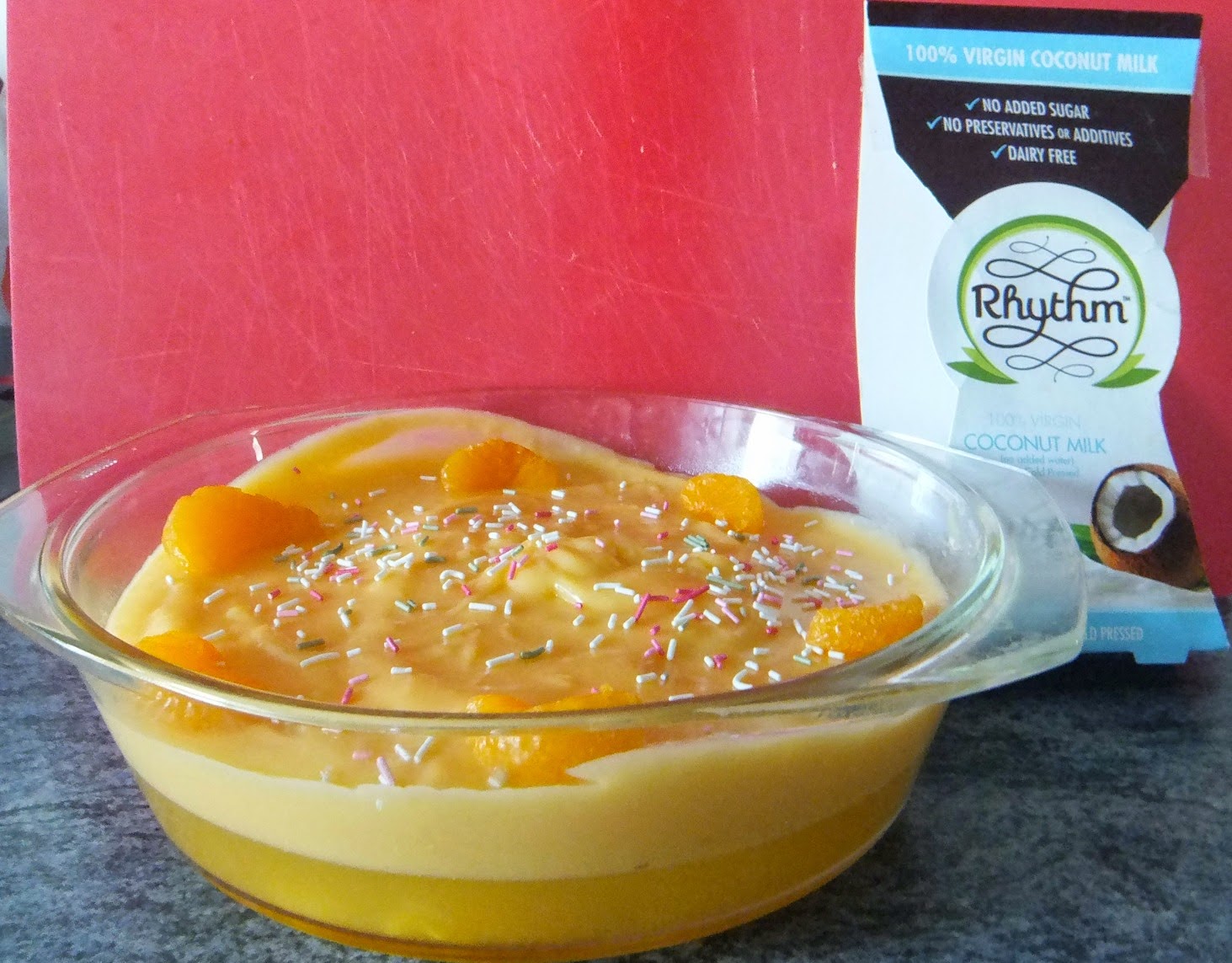 Next off I made the custard as you would normally with custard powder but using the rest of the coconut milk. Left the custard to cool and then spooned it on top of the jelly and again put it back in the fridge to set. 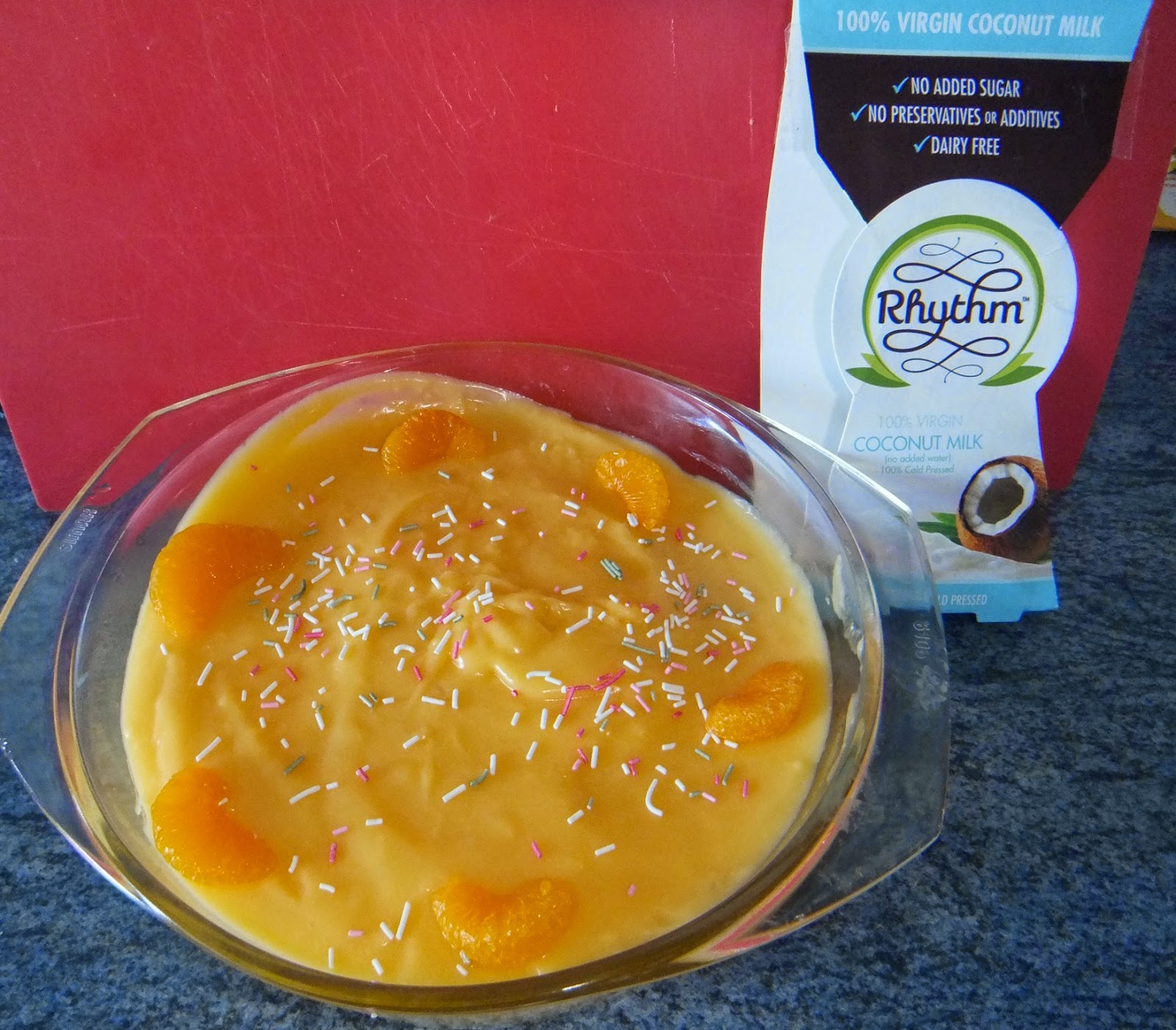 Decorated the top with some reserved mandarins and sprinkled on a few hundreds and thousands. Bob was delighted with it, he loved it, and ate nearly half in one sitting, and I am sure would have ate more had I let him.
Guess this is going to become a regular in the house.


Disclaimer - I received one pack of Rhythm 100% Virgin Coconut Milk but the recipe idea is my own.