Best place ever in England

Found a posting on a fellow bloggers page entitled Thursdays Travel Meme, liked the theme and thought it would be fun to join in, and here is my posting for you to read.


Having not actually lived in England for many years of my life, and not being the sort of person who takes holidays then I don't have huge memories of, or easily picked favourite places - but there is one that springs to mind. Well this might not be the answer you are looking for but to me it is exactly that -  My Grandparents house.

I was brought up in the RAF and never had anywhere to call home, no roots, few friends, constantly moving, and not always in this country. But the one thing that remained constant was my paternal grandparents house. I didn't feel it right to give out the address as I googled it and it still exists, though looking at the google street map the street has certainly changed.They lived in the same house from before my dad was born, right up until the landlord they rented it from wanted to upgrade it, which my gran would not allow until the mid 80's after my grandfather died and she had to move into a smaller more convenient property.

They had an outside toilet, our weekly bath ( up till I was about 10) was in a tin bath in  front of the fire in the kitchen, which eventually was a proper bath with running water curtained off in an annexe of the kitchen, there was no central heating or double glazing, not even a carpet in the bedroom, but boy oh boy did we all love it.

We had breakfast made for us, we spent  hours a s a family playing card and board games, we visited relatives and made friends with who hadn't moved on time you next went back to visit.The electric blankets plugged into the light socket in the ceiling, and the four of us use to argue over who got to stand on the one small sheepskin rug on the bedroom floor whilst we got dressed. The four of us shared 2 beds and was probably the only place we didnt fight and argue as you would not want to upset my gran. She was a small woman, less than 5ft, but she took no nonsense,  and we had huge amounts of respect and love for her, and I still miss her very much even now ( but I digress).


She grew every fruit and veg imaginable in her garden, she worked full time for as long as I can remember and the highlight of the day was walking down to the factory at 4pm to meet her when her shift finished. 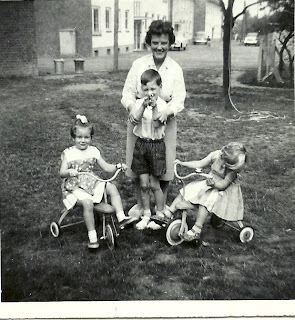 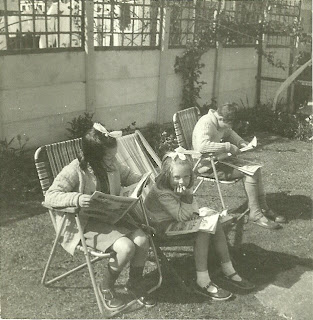 The first picture shows us older 3 with my gran though this picture was taken in Germany in 1962 (Im looking at the ground)  and the other is us older 3 sat on chairs reading books in the back garden of my favourite place. (Im in the middle)
Posted by fun as a gran at 21:52