My plants were being delivered from Rocket Garden this year to make my life easier, but mainly because it was won in a prize, so why would I want to bother bringing them on from seed when I could have them delivered? I know its not quite in the spirit of allotmenting but these companies exist for a reason.

Now I received an e-mail on 12th April thanking me or my order and that my plants would be with me and (I quote) we’re hoping that they’ll all be ready for packing up and sending out to you from late April.  , it then goes on to tell me Don’t worry though, we’ll send you an email approximately 5-10 working days before we send out your garden and another on the day your plants leave the Rocket Farm.

Well I got the e-mail on 18th to say coming out on 19th, no e-mail 5 to 10 days previous as promised to that, and as it wasn't  the end of April I thought I may just be getting my seed potatoes so didn't worry unduly, but no, just before 3pm a box arrives with all my plants in it. It advises you to unpack immediately and water them and plant within 24 hrs. Well I don't have a green house so had little option, unpack here and water and risk damaging them when moving them to the allotment or just take them as was and deal with them there?

This decision at the time was made more difficult as I have the grandchildren on a Tuesday for tea and a sleep over, but had to phone and let them down. Have e-mailed them to ask about why we have got it out so early with no warning, but so far no reply. So much for customer service!! Well I have to say that since this blog went up I have had a reply that says (and I quote)
At the moment have said I will keep what I have got as it is already planted, and if in a month they are all coming on all right then I will turn down there very generous offer, if not then I will get a new lot out, but don't see the point in saying yes just to say yes when these may do fine.

So we duly loaded the box into the car, I had delivered a Spring small vegetable garden   took them down the allotment and had to start digging over the garden to get it ready, hadn't done it before because we didn't feel there was any hurry, we are West coast of Scotland and we have been having snow and heavy frosts here this month already, and thought we would have a weeks notice to enable us to prepare. But anyway we duly dug over the garden and threw in a few handfuls if varying things oh thought they needed and planted most of  the little plants we had been sent, 3 1/2 hrs later and here is the result. 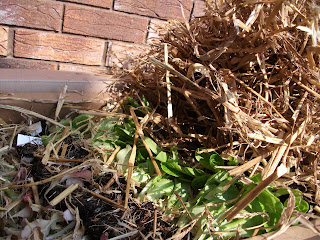 Opened the box to find all sorts hidden 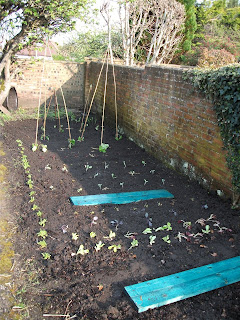 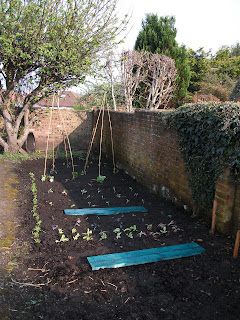 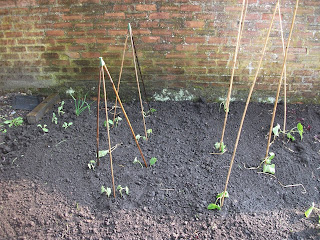 The runner beans and dwarf beans all caned up 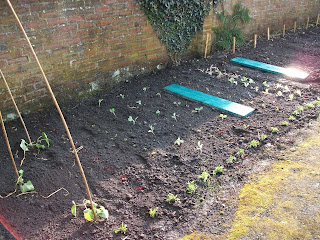 the purple coloured ones are the beetroot, and the rocket is all along the front.

Brought back the 3 tomatoes and 3 courgettes as these would not survive, and 6 lettuce because we run out of room.

By choice I do not feel I would buy this particular selection as there is too much what my oh calls rabbit food in it, we are more turnip and pea people, but will see how it all goes, what grows and what dies and what sort of yield we get out of it all.

Would I buy another one..dont know yet, but if I did it would not be ordered until end of April for delivery for mid May or later.