One of the drawbacks of having a child like Bob is that a lot of foods and drink cause him upset stomachs and stomach cramps (and worse), and as somebody who shares a lot of his intolerances I can appreciate why eating can be a major trauma.

Ever since daughter took Bob of his night time bottles at 2 1/2 he has never drunk milk from a cup, as you can physically see him gag as he tries to swallow it. Have tried all sorts of different soya milks, from the stuff he had in a bottle to flavoured, sweetened, unsweetened, you name it we tried it.

I can appreciate where he is coming from, as can my daughter, as neither of us can physically swallow the stuff either, even if you stir your coffee and then put the spoon into my black coffee I can taste it and it makes me gag. So we have never pushed him as it seems cruel, but we do worry about the long term impact not just on him but on us as well.


So this following picture is a piece of history and therefore I have to, as a proud grandparent share it with you. 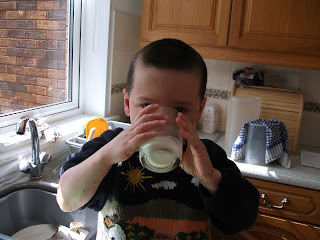 This is Bob, for the first time in over 2 yrs drinking a glass of "milk" and asking for more, he loved it, and it now opens up a whole new world to him. I had bought Provamel Rice Milk to put into the blobs we were making and was going to experiment with the rest of it as to whether it would make into yummy yoghurt or not  because I am fed up of the disgusting price of soya yoghurt.  Just as well I bought a carton of soya milk as well I think!! ( will blog about it if it works)
Posted by fun as a gran at 17:07