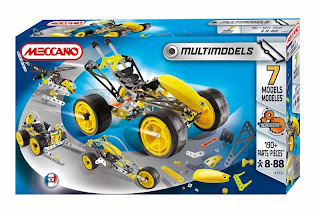 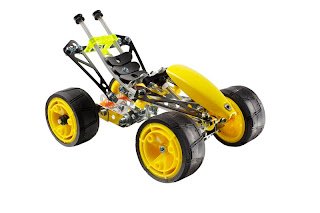 As you have seen on Meccano Review 1, the grandchildren got to grips with one Meccano set I had been sent, so this week was it was the chance for set 2.

This set is more your traditional Meccano that I remember my brother having when we were kids, and is designed for 8-88 yr olds, so Fifi just falls into this age range. We were given the new 7 model set and there are plenty of others available over at Meccanos' own website.

So she decided as she had built a helicopter in week 1 with the other Meccano that she would build a helicopter with this set as well.

Now Im slightly under 88, not a lot but under none the less, and I struggled to read the diagram instructions, I personally found them too small to read clearly without my reading glasses, but Fifi seemed to manage ok. She didnt always look properly and just picked up the first bit that looked right, and we had to undo a few pieces as she had picked up a wrong piece. But she learnt by the half way through to look at the front of the book as it had a list of what each piece was and each piece had its own unique number.


Fifi did struggle with this as she found it very difficult to manage on her own, as she could not use both tools and hold what she was assembling at the same time, so I had to hold one of the tools for  her so she could tighten up the bolts.

Anyway 2 hrs later ( by which time I was totally fed up and half wished she wanted to give up but she didnt), we had a helicopter. Think 1 bit was upside down but didn't tell Fifi that.


Thoughts  - some of the picture instructions were not the clearest ( didn't tell you how far through to push the piece of metal we later worked out was for the winch.....and that was thanks to the fact helicopter heroes was on while we were building. We also noticed the No5 instruction had an error in.

Feel this is a bit fiddly for Fifis' age so we are going to play with the younger set for a while so she can use her imagination and get pleasure out of achieving, but with time and confidence she should be fine.


So to give this a fair test I asked one of my neighbours children, K who is nearly 12, if he fancied playing with it for me for a while.. K had never heard of Meccano but took it off me willingly and took it away to play with. His mum says he likes building things and does brilliant with his lego, so I look forward to getting feedback and photographs from him. Good luck K.


Meanwhile whilst Fifi and I were using the more grown up Meccano Bob was amusing himself with his box full. He sat for an hour and built himself a dragon, he loved playing with it, thinks its great fun and loves having it. It is certainly a hit with him and eventually he will be able to follow instructions.


This is a sponsored review, I was not paid for doing this but was given the Meccano free, and all comments are my own true findings.
Posted by fun as a gran at 20:29