I was chosen by Mattel to try out a new boxed game every month for the rest of the year, and first up was Junior Scrabble. We still have a version of this from when my own children were young but it was made my a different company and although the words are the same the board is slightly different.

I liked this one as  only the key letters are in filled  in the words that need to be completed, and a picture at the start of each one to help the children work out what the word is they need to complete.

We got the board and the letters out and then we went through and tried to identify all the pictures first off. Bob struggled with the bunch of trees being a wood, needed some help to work out the moon depicted night and would insist the pink cloud was a cow - according to him that's what it looked like and he took a lot of convincing it wasn't. But even before we had started playing this lead to some learning and discussion.

The idea of the game is ever player takes seven letter tiles and on their turn places two of their tiles anywhere they will fit on the board. You do not have to put in the first letter before you can add the second etc. and work towards filling all the board by completing the words. For each word that is completed you receive a blue counter and the one with the most counters wins.

This is where the challenge comes in as not only did Bob have to work out what the word was, he had to work out the spelling in his head and place the correct letter on the correct square. By the age of five most children can manage taking turns and waiting but loved the way anticipation would build if only one letter was required to complete a word and they had picked that letter up at the end of their turn and they hoped nobody else finished the word before their next turn.


I wanted to see how well Bob could manage to work out the letters required to complete the board and I only needed to give him minimal help with tyre, night and leaves.


During the game play Bob was placing letter sounds together and saying what they were.

After we had finished the game, Fifi won, we turned the board over and played half a game of proper scrabble. This game was a bit to advanced for Bob and he needed too much help to achieve the end result for him to enjoy it, but we ended up just using letters to make words without joining them up.

The second game we need to do a lot of work on to teach Fifi the concept of looking at the letters
she has and seeing what she can make with them in conjunction with what is already on the board. Next week we may try it again and just put all the letters out and let them pick letters that will make words until they grasp the adult concept of the game.

She sat this morning and made up these words using a selection of the tiles from the game. 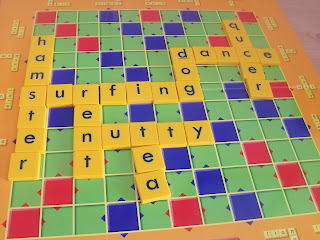 We were sent this game to review but the findings and comments are our own.
Posted by fun as a gran at 12:42