The Magic of Christmas

Britmums asked us to


Share what the Magic of Christmas means to your family with our fun and easy holiday Linky Challenge!

Come back and link it up.


Most families have a tradition that signifies the start of Christmas in their household. In our house it was putting up the tree and making mince pies the nearest Sunday to the 14th December.For my daughters and the grandchildren it is heading off to The Santa Express at The Museum of Lead Mining at Wanlockhead.

Museum of Lead Mining, is a Visit Scotland 4 Star Visitor Attraction set in the picturesque village of Wanlockhead, which at 461m / 1531 feet above sea level is the highest village in Scotland. The village is set amid the Lowther Hills, directly on the Southern Upland Way just minutes from the amazing Mennock Pass, which offers some of the most beautiful scenery in Scotland and only 9 miles from the M74.


This has been the fifth year that they have gone up there, and due to its location there is generally snow for them to play in. Sadly there was none on Sunday.

Santa Claus has his grotto down the mine so the children also get the chance to do something different from the norm. Hence the hard hats in the pictures. 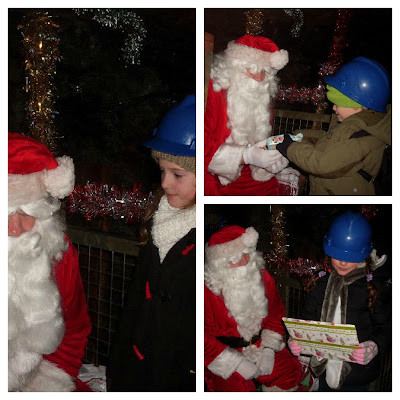 Much to my daughters dismay I have carried on our tradition but now with the grandchildren, making mince pies on Christmas Eve. My daughter has suggested to them that she would like to make mince pies with them, but no they are adamant it is something they do with Grandma. It helps to pass the day for them, gives them something to occupy themselves and allows me to have a great bond with them. So it will be mince pies for Santa and allergy free crispie cakes for the elves.  We will watch a soppy Christmas cartoon/film of somesort, stuff them with home made pizza and send them home a few hrs more tired then when I got them.  I guess my daughter is just going to have to look forward to having grandchildren to make mince pies with....sorry daughter.


This is my entry for the #O2GuruMagicofXmas Linky, sponsored by O2 GuruTV – the home of tech help and inspiration.

The #O2GuruMagicOfXmas Linky is sponsored by O2 Gurus. O2 Gurus are O2’s tech experts, helping and inspiring people to get more from technology. On O2 GuruTV on YouTube they host content about tech news, apps, innovations and challenges; this holiday season they are featuring the 12 Apps of Christmas, showcasing apps relevant to the holiday season. Check out their latest video with some fab suggestions for Christmas apps: