Something different with Aunt Bessie

I was sent a pack of goods by Aunt Bessie a few days before Christmas, must admit the roast potatoes, the sprouts and the honey glazed parsnips were used to go with dinner on Boxing Day, nothing fancy just straight out the pack and cooked as per the instructions. 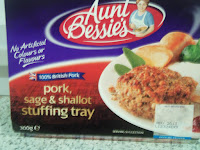 But tonight I decided to use the stuffing to try something a bit different with. I used it in two different recipes.

cut the seed head out of a pepper and deseed. Place small pieces of stuffing into the hollowed out pepper and push to the edges to create a lining for the pepper and then fill the hollow with a soft cheese.

Cook for about 30mins at 180Oc until the pepper is soft and the stuffing cooked.

I par boiled some sliced potatoes and sweet potatoes, and layered them in a baking tin with some thin sliced onions. Spray with one cal oil and then place some thin slices of stuffing on top. Cook for 30 mins at 180 oC until potatoes are crisp and stuffing is cooked. 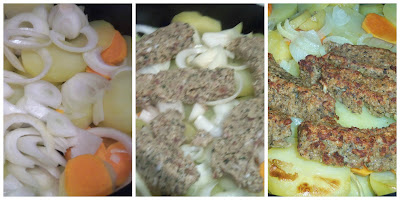 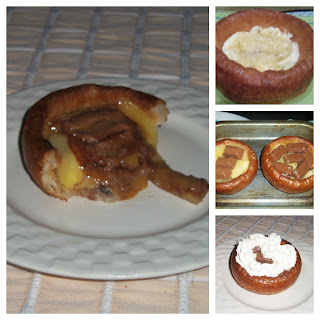 I have never thought to use pre made Yorkshire puds, and certainly would never think to use them with a sweet filling, but have seen others doing it and thought I would give it a go. So I took a pack of large puds and placed some mashed banana in the bottom, add some thin slices of pre cooked apple. Then as they were lying around since Christmas I topped some with mini caramels and others with mini mars bars cut in half.

Cook in a preheated oven for approx 5  mins until the chocolates have melted.


I was supplied with the items, but the recipes and ideas are all my own.