We have got to the stage that all the children have left home, and found themselves husbands/partner and now have their own family to do things with on Christmas Day. We do pop down to see DD1 and the five grandchildren that live just round the corner. But apart from that we are now at a loose end during the day.
We do what we now call "second Christmas" when we all get together and swap presents from our side of the family amongst the children on a different day. A great compromise that suits everybody, and to be honest the older children love it. It spreads out their presents and means we get to enjoy them opening and playing with what we buy them.

More than once in the past we have talked about finding something to do that will help with those less fortunate. So as this year was not a working day for me we contacted a local voluntary organisation and put our names forward to help. They were planning the day for isolated people who other wise would spend the day alone. As we were driving into town we volunteered to pick up two of the people who would be attending the day.

Upon arrival I was helping one of the ladies out of the back of the car along with her disability walker. Lucky enough hubby was on the ball and spotted the walker running off down the hill towards the main road and ran after it, and managed to catch it before it did any damage. Looked like something out of Benny Hill.

Upon arrival we were greeted by other volunteers, given a name badge and a t-shirt to wear so that we all looked similar and the clients knew who the volunteers were. Hubby went and sussed out where the kitchen was as he had volunteered to spend the day washing dishes.....and spent six hours doing just that.

I went off into the main hall to get an idea of the lay of the land. I felt that as volunteers we were a bit disorganised with nobody given us clear instructions as to what to do. There was a "bar" at the front serving drinks to people, I made it my job of the day to make sure every body had their drinks topped up if needed.

There were approx seventy clients there and fifteen volunteers. This was the sixteenth year that the meal has been held, some of the volunteers have been in since day one, a mother and her two teenage daughters have been doing it for six years and others like us this was their first year.


The whole spread was very impressive and the cook Marie and her daughter Zoe did a fab job of cooking and putting out so many meals in such a small kitchen space.

Nobody had any reason to go away hungry. Once the clients had been served with each course the volunteers got to eat as well. As one course was finished the tables were cleared and the dishes taken through to the kitchen, hubby certainly had his work cut out.

After the eating was finished the music and dancing started. Plenty of them joined in with this and others clapped and sung along.

Next off they had a visit from Santa and everybody was given a present.


More singing and dancing and then the day started to wind down. The minibuses came first to take home the people who came in in them. The taxis were last and meanwhile those that came in by car were taken home. I agreed to take two men home first, they were just going across the road. The two men told me they had been friends for over thirty years.

I had a great day and we have been asked to come back again and help next year, do not see any reason not to.

This lady wanted her picture taken with Marie as she wanted me to use the picture of her. 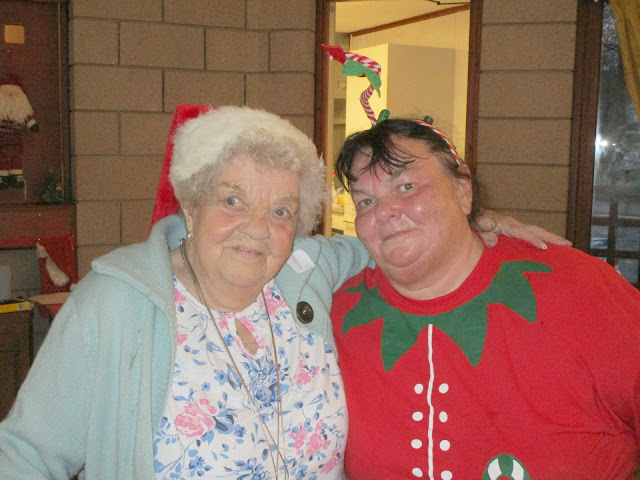