I found this new company on line last month call Bute Island foods and e-mailed them and asked if they would send me some samples out for Bob and I to try, and they were lovely enough to say yes. There web site is fabulous, very clear, concise, well laid out and very very easy to find what you want and move round, they also have a vast amount of useful information and links to help out people like us. 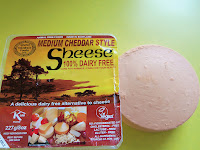 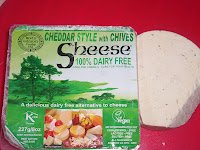 So they sent me out 2 sheese spreads  a normal creamy sheese and garlic and herb sheese spread and 2 sheese  a medium cheddar and a cheddar with chives.


Well when I opened them as did a taste and texture test. They have a more normal consistency than some of the other dairy free cheeses we have tried in the past, the medium cheddar tasted ok but had a slightly bitter after taste, as we decided to use this one in cooking, so we made some cheese rolls, a "normal" gluten free recipe we have used before, we grated some in the bread mix to add a cheesy flavour to them, and then out of curiosity we encased a slice of cheese in a couple to see if it would melt, but it didn't, it just stayed exactly the same as it was. These when they were cooked tasted cheesey enough and they make a pleasant change for Bob from just a plain roll. My home made gluten/dairy free bread is not the best in the world but is tolerable while still warm,  Fifi did not try them as she does not like Bobs bread.

The cheddar with chives had a better texture, much more like a normal half fat cheese, and certainly did not have the bitter after taste the plain one did. Still did not melt, but much nicer to eat by the chunk or slice than other dairy free that I have sampled in the past. This one grated well and didnt just mush up like others.

I have tried in the past to make scones and I must admit I have never been brilliant at it even with normal ingredients, normally if you want them buttered you have to butter one and stick another on top. I decided to use some of the sheese spread to make scones with Bob wont know scones are suppose to be light and airy. So I decided to adapt the recipe from Seriously Gluten Free baking By Phil Vickery that he sent me. Phils recipe is for parmesan, sage and roast garlic, but I just made them plain cheese.

recipe says rub in 75g cooking marge, but I used 125g sheese spread instead to add a cheeses flavour
than add the liquid

then mix together to a firm dough, roll gently and cut out shapes

a couple of them I popped some grated sheese on top to see what it would do - but nothing burn turn brown was the answer.

The scones were pleasant, and edible, even hubby ate a couple. By the next morning they had gone like little bricks that would break your toes if you dropped them on your feet rather solid on the outside, but with a sprinkle of water and 20 seconds in the microwave they were fine again.


My verdict on the sheese, as far as these type of cheeses go, these were certainly more edible than others I have tried. The garlic one was more a normal texture, and the cheese spreads were loved by Bob - and as I keep pointing out to Fifi Bob has nothing to compare them too as she does, he doesnt know "normal" cos theses are normal for Bob and he happily ate them, so I would certainly recommend you try them.

This is a review post, the foods were provided free by Bute Island Foods,no other payment was received,  but the findings remains honest and not influenced by this.
Posted by fun as a gran at 08:49