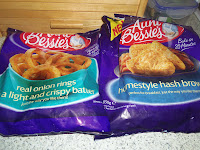 Hunted through the freezer tonight for something to use with my pork chop for tea. Was feeling in a couldnt be bothered to stand and cook mood but didn't really have enough of anything to make a full size meal. 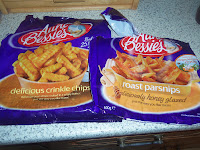 Now I appreciate it is hardly being a whiz at creating a menu, as asked for in the blog  post but in the current economic times we are in it is a thrifty use of items. When my children were young they liked nothing better than "freezer clearance tea" whereby I hauled all the bits and pieces out and cooked them all and they selected what they wanted. Little did they know then it was done when we were skint, they thought it was a great tea.

Tonights meal was quick and easy, put it all on a tray in the oven, and after ten mins added the onion rings to the tray and at that point cooked some mixed veg on to boil as well. 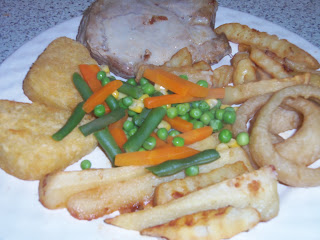 and to save more waste I had made a peach cake last night, and finished it off tonight with the left over custard. 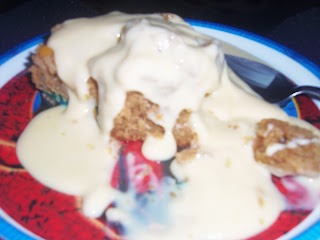 It looked like this last night. Placed peaches in the bottom of the tin, poured over a basic cake mix with added almonds and  then topped with some biscuits that I had made and had uncooked in the freezer, so again it was being thrifty using up odds and ends. 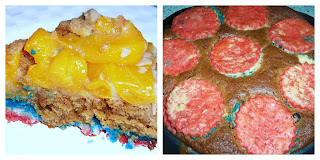