After work today as the sun was shining I dragged the two males in the house out for some fresh air, and believe me it was fresh down the beach.

OH decided he wanted to take his camera an get some pictures of the black swan that I got a picture of the other day. So off we toddled down to the Millennium bridge again as the tide was nearly in again. We spotted the black swan but it was on an island just off the coast. So OH and Son No.1 decided to manoeuvre their way through the marshy/boggy bits to get round to the we island the black swan was on. 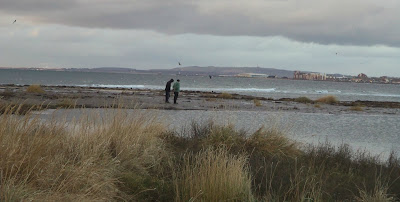 Time they got out there the black swan had decided to swim back to the shore, so they promptly came back to try again But the swan would not really oblige them and swam off again back to its island. I just stayed on the safe side and took pictures of the two of them getting wet and muddy.
Posted by fun as a gran at 19:42

Email ThisBlogThis!Share to TwitterShare to FacebookShare to Pinterest
Labels: 322/366, Project 366