Pictionary by Mattel - A review

As part of their aim to get more families playing board games together Mattel sent me out a selection of board games so I can rant to you all about how much fun we have playing them sat round the table in an evening.

Tonight's game we had fun with was Pictionary.

Celebrate 25 years of the classic game with the new family edition of Pictionary, with two sets of cards (adults & kids) with differing difficulty levels and even more plays. The game of quick sketches and crazy guesses. Let your imagination run wild and your pencil will follow. It doesn't matter if you can draw the Mona Lisa or just stick figures, the excitement begins when everybody tries to shout out the right answer. This 25th anniversary edition of Pictionary includes 123 adult cards, 83 junior cards, 2 card boxes, 4 category cards, 4 pencils, 4 drawing pads, game board, 4 playing cubes, sand timer, die and instruction sheet.


We opened the box and took out the contents including he instructions, which we had to read through more than once as we didnt find them overly clear. We had to read them a few times before we could grasp the actual meaning.

The idea is you split into teams. Each team takes turns to throw the die and move round the board. You then choose a card and read out the category to the rest of the players and then depending on the colour you landed on you draw the word that is on the card. 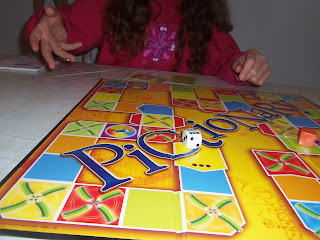 We did not split into teams, we played as one team as Bob was slightly too young to appreciate what we were trying to do and that would have meant only two people in a team and Bob would not have had much fun at all playing, so we adapted the rules to suit him as he is six and  the game is aimed a age eight plus. Most games are adaptable if you put a little thought into it.

So we took it in turns to move round the board and draw the picture with the other three trying to guess what we were drawing. It is a fast paced game as the egg timer only gives you a minute in which to draw and guess.  Bob was slightly to young to grasp the concept of drawing stick figures and rough sketch pictures quickly to get your idea across so we just let him finish drawing his pic with us guessing without using the timer.

This became a riotous game with lots of giggling and pointing and conversations with mad guesses going on. We all enjoyed ourselves as we do with all board games. The children enjoyed it, and there is years of use in games like this because Bob will grow into playing it correctly, and then we can move onto the adult level as boh children get older. This game is here to stay for a while yet. 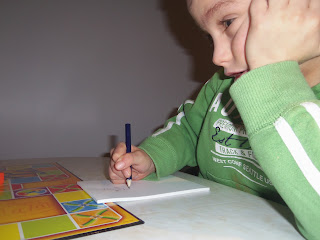 I like the way this makes the children really think both about the word and how they are going to portray it. It helps with reading and comprehension , as well as interpretation skills of other peoples art work.


I felt the cards were a bit flimsy and that a plastic tray to slide the cards out of rather than what looks like a cut down cigarette box that makes extracting a card quite difficult. The board is well made and the counters for the players are die shape so easier to handle than a flat counter.

Why not buy your children a family board game for Christmas and spend some uninterrupted time playing games. You would be surprised how children light up when you do, and I always find that getting children relaxed gets them talking.


I was sent the game to do a review on and this review reflects are findings.