We were sent a game of Whac-a-mole Molehill mania by Mattel to play with and see what we thought.

In the box you have 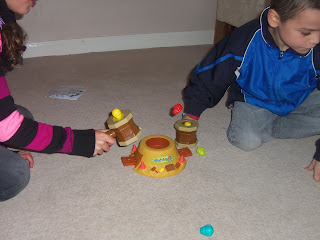 The game is aimed at age 4+ and is made for 2 players, and you can play three different levels of the game depending on the age of the players.

The game is brilliant from the point of view it takes seconds to set up, literally take the molehill out the box and pop the moles in the top.
Seconds to learn how to play, with three different levels making it suitable for all ages,from picking up any moles for the youngest of children, to choosing a colour and picking up your own colour and the hardest level involving you being more selective of the moles you pick up as they are worth different amounts of points, the highest score wins.

Each game lasts for less than thirty seconds, making it  brilliant even for a child with a short attention span. The game is very physical with a lot of movement literally leading to  hilarity.  The game can become a bit physical and more than once one or the other of us got whacked with the mallet during the quick game play.

Our verdict - brilliant game, very entertaining, and suitable right up the ages.
Posted by fun as a gran at 20:52