I was sent a flask and a cooker to review for the guys over at Gear we are. This flameless cooking system is a revolutionary new system that as the title says doe not use flames to produce heat as such therefore no danger of setting fire to your tent or clothing.

The flameless cooking system uses a small pack, marginally bigger than a teabag, that when added to water produces a chemical reaction that produces heat and warms up your food. It advertises itself as a Revolutionising outdoor cooking technology.

It is ideal for when you want to go out fishing, camping, trekking etc. It produces no fumes, just steam, and therfore can be used inside a tent with no risk at all.


So what comes in your pack


The two different heatpacks produce different amounts of heat for different lengths of time, so you can choose which one suits you beat

First of all I tried the cooker with the super power heatpack which tell you it  heats to 90 oC  and will still be producing that heat after 40 minutes.

So we set it up ( in the garden) on a miserable afternoon with an outside temperature of 11oC with a slight drizzle.

I followed the instructions and put a 440g tin of heinz ravioli into the stainless steel container, there was probably enough room to have put in 2 tins but that might have taken longer to heat.  I opened the sachet, placed it into the bottom of the heat resistant plastic box, poured on the recommended 120ml water, put it all together, clicked the lid on and left it. It immediately began to produce steam and you could hear the reaction happening. Went back ten minutes later and the ravioli was warm, but not piping hot, so we left it for another 5 minutes, and by this time is was indeed piping hot, took 15 mins which was fine. We transferred the ravioli to a dish, which was safe and easy to do as there was no water left in the metal tin.We then added a 440gtin of  heinz spaghetti bolognaise and resealed the tub. Went back 7 mins later and it was still cold, so I added some more water and placed it back together, and another 15 mins later it was warm enough to eat but not hot.


Next we tried the flask, it uses the smaller heat packs and advertises itself as


The 360ml Flask allows you to heat and cook liquids without the need for flame!
Using the water activated heat pack the flask produces no Carbon Monoxide unlike gas or petrol and is therefore safe to use inside a tent! 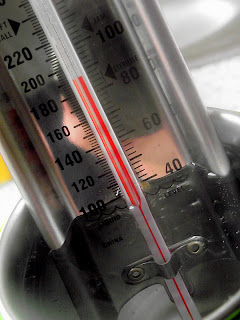 I filled the flask with cold tap water, added the heat pack in the bottom of the  outer flask, added the specified amount of water and sealed it all together. After 12 minutes it had reached 88 oC, more than hot enough to make a cup of tea, a cup-o-soup, hot bovril or a couple of pot noodles. We used the water and added some more to see whether you would get 2 heatings out of it, but you didn't, so I also tried adding more water to the chemical pack but this but it didnt make any difference, and it barely made the 2nd lot of water blood heat.


So my finding on these products are they would be ideal for taking fishing, camping or trekking.  lightweight easily portable with no need for gas or matches. Safe to use in a tent or out, and once the small amount of initial water has been absorbed there is no risk of spillage or burning.

We liked the idea of this system producing fresh, hot food and tea rather than something you have kept warm and stewed that is served tepid from a conventional flask.

The downside is the replacement packs work out  rather expensive but would heat enough for 2 or 3 people if you were using tins of soup or beans rather than chunky ravioli as we tested it on.

We were sent a beta version of this product free of charge to test on behalf of Gear we are.com who specialise in doing outdoor gear reviews, but we were not paid for this. The review is, as usual, my honest findings on the product not influenced by the fact it was free.
Posted by fun as a gran at 16:47

Email ThisBlogThis!Share to TwitterShare to FacebookShare to Pinterest
Labels: flameless cooker, flameless flask, gear we are