Using my tofu and other main courses

As my regular followers will know most of what I tend to put up on here tends to be baking rather than cooking. So this time round you are all in for a shock, I have some main course pictures for you. I often feel blogging these is an insult to a lot of peoples intelligence, so rather than writing you up recipes I am writing up ideas just so you can maybe get some inspiration from my ideas. 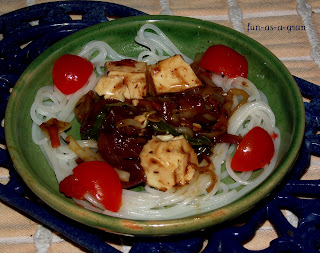 One of the items I chose from Healthy Supplies this month was tofu. I have got to this age and have never tried it before so I thought ti was about time I saw what all the fuss was about. I cubed up the tofu and poured a blue dragon black bean sauce over the top, stirred it round gently and popped into the oven at 160 oC for 15 mins. From reading about tofu it has no flavour of its own thereby picking up whatever flavour you use it with.

Meanwhile while the tofu was flavouring up I stir fried some vegetables and cooked up the rice noodles I chose to compliment the tofu. A quick healthy meal in less time than it takes on the local eateries delivering your take away.
Verdict? The tofu has no texture of its own as such but this was nicely complimented by the crunch of the vegetables and bulked out by the noodles. I enjoyed the meal and would use tofu again. 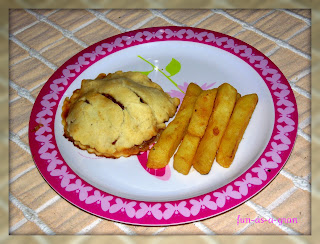 Whenever I cook meals I usually bulk cook the likes of mince, stew, soups etc and place portions into the freezer. I seemed to have rather a lot of portions of mince left last week so decided to turn a portion into cornish pasties. I cubed up some potatoes and cooked them till nearly done, and then stirred them through the cooked mince. Meanwhile while the potatoes were cooking I made some gluten free pastry as per the recipe for Chicken and mushroom pie on Healthy Supplies own web site


I rolled out the pastry and cut some circles, place some on a greased baking tray, added the mince and potato filling, and placed another circle on top sealing the edges with water.  Cook for 15 mins at 180 oC, and served with oven chips which can be cooking whilst the oven is on anyway.

Lastly to ring the changes with something different but very tasty I made a "bacon and onion puff" as I called it as I had won some vouchers from a competition for jus-rol. 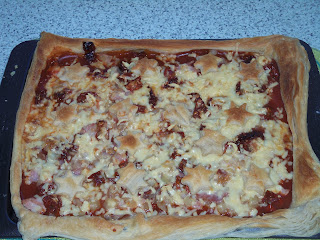 Firstly I soaked some dried tomatoes in boiling water. While these were soaking  I cut some bacon up into small pieces and fried them up with  some onions. Once cooked I cut up the soaked tomatoes and added to the pan. Turned off the pan and left covered to mingle the flavours whilst I rolled out a sheet of puff pastry and placed on a baking tray. Top pastry with tomato puree or a sauce of your choice and spread the bacon mix on top. Sprinkle over some grated cheese, and then decorate pie with shapes cut from pastry offcuts, and cook in preheated oven at 190 oC for 15 mins or until cooked. Serve with oven chips and veg or a side salad.

So there you have three fairly quick and  simple ideas, enjoy if you try them.
Posted by fun as a gran at 16:43