Lactofree advertise themselves as "say yes to dairy without the lactose".

Their website has a host of useful information covering topics such as discovery, products, stockists, and restaurants. 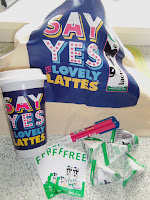 I like their website, it is easy to manoeuvre, you can read other peoples stories and find tried and tested recipes.

I was sent a goody bag the other week with some nice bits and pieces in, a latte mug, a canvas shopping bag, some milk sachets and some vouchers.

I buy their cheese and spreading cheese all the time as I find them useful items to have in my fridge, from toast to a sandwich, spreading on biscuits to using in sauces or other cooking. So I used the vouchers for some things I never normally use out of their range, the milk and the cream.

Their range is expanding and they have added butter and individual cartons of milk, which is handy to pop in a bag to take out and about with you.

Usually I use soya milk for my milk needs as I have a psychological hatred of drinking milk, lurking back to primary school, and only use it in recipes and as I make my own soya milk for cooking with I dont actually buy anything other than normal milk for OH. 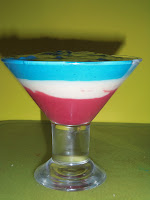 I bought some milk and made a fruit mousse with it, recipe can be seen here, also used milk for custard which is handy as hubby moans ( if he sees me) using soya milk for his custard so usually if he is hovering around the kitchen I need to make separate stuff.

The cheese is handy in bread, cheese pastry, pizza, quiche, plus of course scrummy yummy cheese on toast.

I tried the cream for the first time, it whips up a treat and tastes just like normal stuff with none of the pain as an after effect. I used the cream to make a jubilee meringue with as you can see here.

I also tried the yoghurts . These come in a four pack of two raspberry and two strawberry. They were a pleasant tasting yoghurt, sweet without being too sweet, fruity and pleasant and very easy to eat, again with no of the after effect. They make a pleasant change from soya yoghurt, which again I make not buy as I prefer my own. Must admit I would use the milk to make my own yoghurt with but could not risk it being given to the grandson in error by somebody else so I wont.


My opinion; the product is handy to have, nice for a change from soya with none of the pain and discomfort I have come to associate with dairy.

I was sent a goody bag from Lactofree with no obligation to write about them, but as I like them I have done

Email ThisBlogThis!Share to TwitterShare to FacebookShare to Pinterest
Labels: lactofree