I was asked if I fancied doing  review on this new yoghurt from Provamel. Now I must admit if there is one thing I feel is wrong on this planet is milk and orange together, we all now one makes the other curdle and I have never fancied the idea, but I thought as soya yoghurt is not dairy based I had to give it a try.

Provamel is excited to announce the launch of a delicious and Redbush flavour fusion – the latest addition to its ‘botanical’ range of soya yogurts which hit shelves last year. 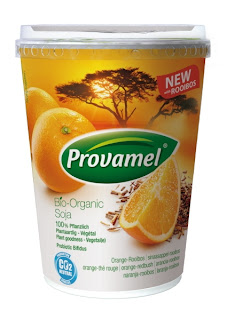 Bringing together natural herbal remedies with great-tasting fruits, the ‘botanical’ range was the first ever yogurt of its kind, with its unique Apple and Green Tea (500g) and Lime and Lemon Balm (500g) dairy-free flavour combinations. and Redbush (500g) is set to follow suit this spring, with a mouth-watering flavour brought to life by zesty oranges and aromatic Redbush.

Commonly consumed as a tea, Redbush, or Rooibos, is known for its high level of antioxidants and is packed with vitamins and minerals. Redbush has traditionally been used to help treat a variety of health conditions, from skin allergies, stress and sleep problems to indigestion.

Provamel’s new and Redbush flavour is now available from all independent and major health food stores with an RRP of £1.55.

So what did I think?  The yoghurt was actually very pleasant, no real hint of orange just a nice fruity undertone. The redbush came through as the dominant flavour, and I love rooibos so for me it had to be a winner. Overall a very pleasant flavour.  Would buy it if I was in the market to buy yoghurt. ( I make my own)

This is a review post for which I received the pot of yoghurt to try.
Posted by fun as a gran at 07:46