Bob turns seven in a few weeks but his mum had organised his party for today, as with the school holidays getting in the way the invites needed to go out either before the holidays or after, so the party was either early or late, so she decided this would break the holidays up.

To make the party easier my daughter hired the local community centre and an entertainer. I have never seen him at work before but my daughter used him for Bobs 5th party as well. He was very very good with the children, he had them eating out of his hands and laughing, dancing and playing games. He was so full  of energy and fun and well worth paying for.

The tongue twister certainly got some laughs. Bob is after the two girls.

A lot of energetic dancing went on, and Daniel was brilliant at getting them all to join in.

All the children ended up with a balloon model.

This will be a day Bob will remember for a long time.

Here is a picture of Bob blowing out his candles, this is courtesy of his other gran as my battery chose to go dead at that precise moment. 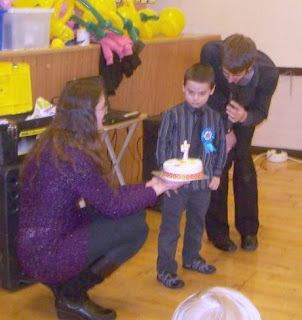 The entertainer is called Daniel Sherlock, he advertises himself as an all round entertainer. He is a cabaret artist does DJ and karaoke, birthday parties and special occasions for all ages, balloon modelling and much more. For information and prices call Danial on 07890662210
Posted by fun as a gran at 21:14