A Means To An End-oscopy.


After various consultations with my doctor it was decided that I needed to go for amongst a battery of other tests an Upper GI Endoscopy I had only a vague idea as to what this entailed so me being me I decided to do a bit of research on the internet (which as it turns out was a be a bad idea) like many others I chose to read about it on the NHS Choices website (http://www.nhs.uk/Conditions/Endoscopy/Pages/Introduction.aspx)
If you follow the link and I strongly advise you do a lot more detailed information on the procedure can be found.
Basically it involves a camera being inserted into your body via various orifices in my case it was to go down my throat, this most certainly did not appeal to me one little bit. 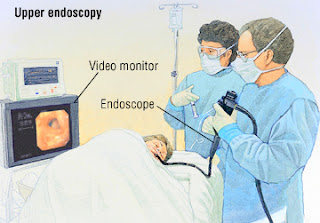 As I have said I read about it on the internet and my fears were confounded by the number of horror stories regarding the procedure, after all when it comes down to it they are pushing a foreign object slightly thicker than your index finger down your throat and your body’s obvious response is to reject this, I was especially terrified of the gagging reflex of which I suffer badly.
I was not looking forward to the envelope arriving confirming my appointment at the hospital and when it finally did arrive my fear of the procedure went into overdrive, three weeks till E day seemed a long time but that did not stop me starting to worry about it immediately. I found myself thinking about it all day and waking up at night still thinking about it and as E day got nearer it got progressively worse.
Finally E day arrived I was scheduled for an early morning appointment, the reason behind this is you are not allowed to eat for 8 hours before the procedure and as I need to take medication in the morning with food it was decided to get it done early then I could have something to eat.
To say I was terrified would be an understatement and I was not actually going to go at all it was only a bit of reassurance and a certain amount of gentle bullying by my other half that I finally left the house to head for the hospital, I have only ever once experienced a car journey so full of anxiety and trepidation and that was when I was unfortunately taking my dog to be put to sleep, I just knew at the end of the journey something bad and unpleasant was going to happen.
On arriving at the hospital entrance my fear factor reached level 5, sitting in the reception area it had reached level 7, when name was called it shot off the scale, at this point I had still not signed the consent form as I wanted to talk through the procedure with a human being as opposed to reading about it on the internet. I was taken into a room with the nurse who was assigned to look after me throughout the morning she was extremely helpful and understanding regarding my fears, she explained in detail what was going to happen and asked if I had any questions, needless to say I had quite a few and these were answered to my satisfaction especially the ones regarding having the option of sedation (the more the better as far as I was concerned).
After all the usual checks blood pressure etc I was taken through and put on a trolley signed the consent form and then had a cannula inserted into my arm after much searching for a vein, as it would transpire that this would turn out to be the most unpleasant part of the whole procedure.
I was then wheeled along the corridor looking up at the ceiling lights whooshing by and for some strange reason I was feeling an awful lot calmer perhaps I had resigned myself to the fact it was going to happen, after all I had signed the damned consent form!
Once inside the actual procedure room for want of a better description I finally got introduced to the doctor who would be carrying out the actual endoscopy, she briefly went over what the nurse had already explained and asked that above all else I listened to and followed the instructions of her staff which would make it much easier for me to endure, she then asked me to turn onto my side and she injected the sedation and I can assure you this is the last thing I remember till waking up in the recovery room.
I have to explain a bit here about the sedation, apparently it is what is called a twilight sedation which means though you are sedated you are actually awake and aware of what is going on though you will forget all about it, the reason being that as I said you have to follow instructions from the nurses and doctor during the procedure.
When I woke in the recovery room I was not even sure that I had been through it at all, I asked the nurse and she said yes I definitely had been and that I had been awake and communicating through the procedure, I can categorically state without a doubt that I could not remember a single thing about it a fact that I found slightly disconcerting yet quite glad for the fact that I couldn't if you see what I mean.
I had to wait in the recovery room for an hour or so till the effects of the sedation started to wear off and was then allowed a sandwich and a cup of tea taken through and given a summary of how things had gone then was free to leave.

The bottom line is that if you ever have to have this particular procedure Do Not Worry, yes I know it’s hard not to after all it something you probably have never experienced and I was certainly terrified but my advice is Take The Sedation when offered it, you won’t remember a single thing about it, it is easy to say after the fact that it was nothing like as bad as I had read about the worst part for me was having the cannula for the sedation inserted, closely followed by the NHS tea, and I use the term tea very loosely indeed. By far the strangest part of the morning was the missing 20 minutes due to the sedation, it is very weird how I was awake yet (thankfully) cannot remember even the slightest detail of the whole procedure.
I would not say it was a pleasant morning out but certainly not the worst, my advice read up on the procedure at the NHS Choices link, listen carefully to the NHS staff and definitely Do Not read all the horror stories on the internet, they are in my experience completely unfounded !
The doctors do not take the decision to send you for an endescopy lightly there is a very good reason for having it done and, It Could Well Save Your Life !!
Go For It !!