I was asked if I wanted to try out Hot Wheels Ballistiks Rapid Fire Blaster from Mattel.

Create the ultimate rumble with these transforming daredevil ball cars!  Kids can challenge, transform and win.
Ballistiks balls open on impact; throw down your chosen car and watch it transform on impact from a compact fierce looking ball to a ready to race, awesome looking motor. These mad motors transform in front of your eyes creating non-stop action and entertainment.  With endless ways to play, the only question is – how do you roll? 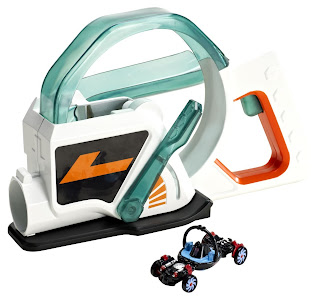 Transform from a swiftly rolling ball to a fast-moving vehicle and back again, and with more than 24 different characters, kids will want to collect them all!  Not for use with some Hot Wheels sets.

.  What a blast watching each ball explode into a car on impact!

This high-speed launcher comes with one Ballistiks vehicle, but kids can load several (sold separately) into the blaster’s magazine to rev up the racing, transforming action!

So I received the launcher that comes with one car, as well as a second car.

We eagerly unpacked the item, undid the screw on the battery cover, inserted the required batteries and was ready for some fun.

I'm sorry to say we were sadly sadly disappointed. he lever was very difficult for Bob (seven) to pull down. We had expected the batteries to make a noise but they just operate a laser light to show you where you cars should end up.

The cars are meant to go round the launcher and turn into cars, well not matter how close we put the launcher  to a hard wall or cupboard and no matter how hard we pulled the lever we could not get the car to go with enough force to do anything. We even tried putting the launcher on the table and launching the cars to hit the floor but even that did not get them to open.

You could see Bob getting more and more annoyed and trying harder and harder to get the item to do what it should. We as adults managed by some miracle to get the ball to change to a car once, but I think it was pure luck.  Certainly did not do what it said on the box. We ended up calling it a day and putting it back in the box as we could see his tears were not far away.

Really not sure what they are suppose to do either once they turn into cars as I do not see how they could keep moving.

We videoed it in case we were going something wrong, but between three adults this was the best we could get.

I am sorry but I have to award this toy 0 out of 10, I am just glad I had not spent money on it, sorry Mattel but this is a big fail in our book.