My "festive face off" challenge. 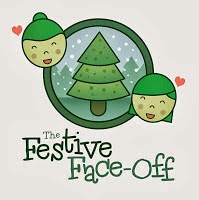 The challenge is simple; we are tasking you with using your creative talents to produce a bespoke Christmas-themed decoration for the home or garden. Your creation will then be judged against those of the other leading UK craft bloggers involved in the challenge in a ‘Festive Face-Off.’ We are only going out to a very small number of select expert craft bloggers of which you are obviously one. Each participant will be sent a special Country Baskets blogger pack featuring a wide range of craft items to help you create your decoration. The pack will arrive with you no later than 18th November 2013 and you will then have at least two weeks to create your masterpiece! You can use your own additional items if you wish and your decoration can be anything from a traditional bauble or wreath, to a larger modern item to decorate the home or even something for the garden.


Well we are not overly artistic or crafty, but in keeping with the title of my blog it sounded like something the grandchildren and I could have fun doing, so I accepted the challenge. I along with the other bloggers received a gorgeous hamper full of crafting items to use.


I have had the grandchildren most of this week as my daughter has been in hospital having their baby brother and sister and so it has been a great opportunity for us to work on various stages of the projects allowing for each stage to dry. This has also had the added advantage if keeping Bob amused and occupied while he has been here and his sister has been at school.

So we put our brains together, did some research on google and came up with some ideas.

First off we made a snow scene.

We took one of the pieces of bark that was in the parcel. 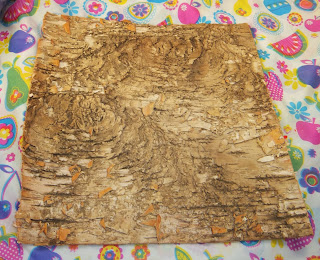 Earlier I had made some papier mache with shredded paper. We then built up a landscape with the mache. 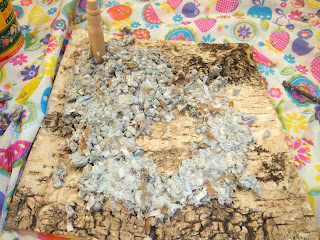 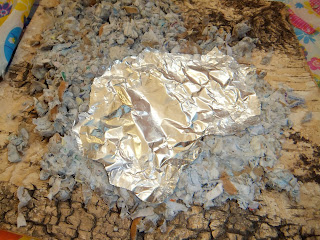 Building in pine cones as fir trees and some pieces or tinsel as bare trees. Once it had dried we painted the snowman, sprayed the landscape with spray snow. here is our finished landscape. 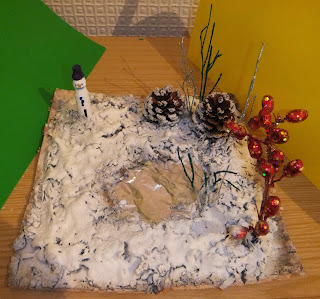 As my daughter is not putting a tree up this year as there will be no room with all the items the twins are going to be needing in the living room for the next few months we worked on ideas that the children could decorate the edges ledges and walls with.

Our second idea was much simpler. Button Christmas trees. These were dead simple. Using a needle and thread pile buttons up together and tie off tight. We did have a whole family of these but not sure where the children have put them.

Next Bob and I set about making some wire Christmas trees. Firstly Bob (with quite a bit of help) bent wire round the shaped end of a bottle to form a tree shape. 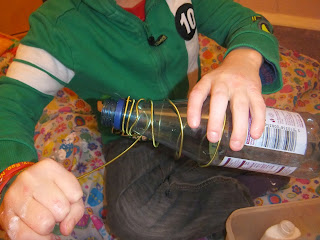 Bob then spread glue on parts of the wire tree 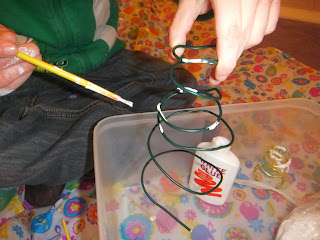 then dipped them into a bag of white glitter. 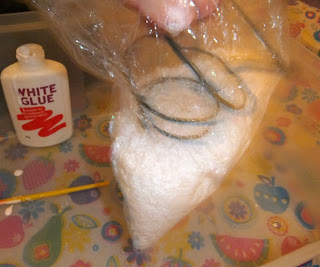 Once dry he painted on red, yellow, and blue blobs to look like strings of lights. 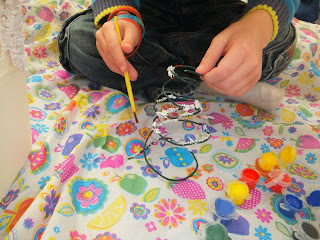 Once they were all dry I added a bell to the top of each tree by bending the wire round, and voila!! we have a mummy, daddy and baby tree. 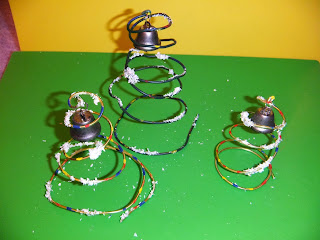 Next off we made some snowmen. For these we used shaped pegs, again we glued them, dipped them in glitter, once dried we painted hats, faces and buttons. Lastly we added some cord as scarves. 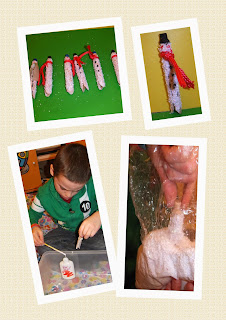 Next up we decided to use some of the flowers and leaves that had been sent to us. I had in the house three clear vessels designed for using in flower arranging.

First of all Bob spread glue round the edges of two of the three we had, and then dipped the glue edges into the glitter. The third one we pour some green paint into the bowls and spread it round to make them green.

Once everything had dried we decide what we were going to add to them. One of them we poured in some pink diamond like beads we were provided with and added some pva to keep them in the bottom. Fifi then added some flowers so they would dry in with the pva and stay put. In the bowls round the edges they added a mixture of holly berries, glitter branches and other artificial flowers.

With the green painted one Bob decided we would glue some of the patterned ribbon round and glue in some of the apples on stalks that were in the hamper. 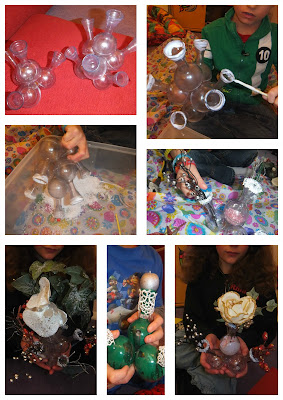 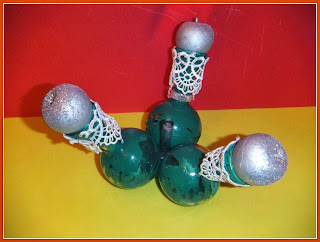 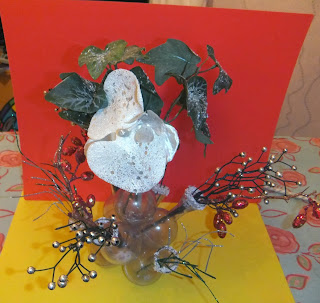 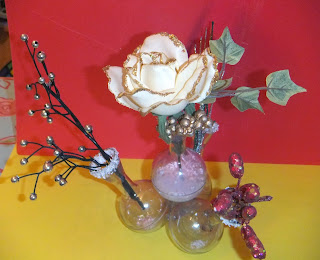 Theses are going to be Christmas resents for mum and Fraser, and Granny Nan and Papa Tom, who are being warned not to look at this post!!!!!!

We had fun with the tub of glitter and spent quite a while writing and drawing in it. 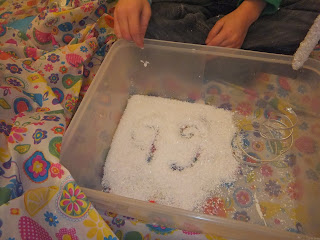 Our piece of which the children are most proud was the final item we finished off.  There was a lot of thought, a fair amount of work and a lot of love put into this item. 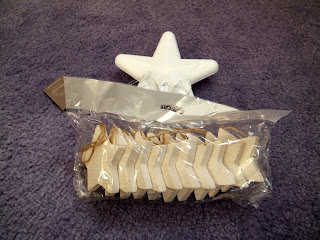 each star had a different design added to one side, with each of them making their own design. Some were painted, some were drawn, and some stuck and glued with various items. 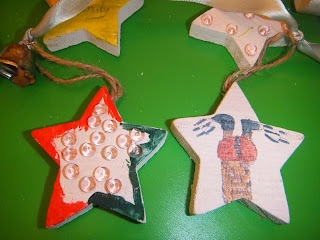 Once they had dried we turned them over and Fifi, in her best writing, wrote on each one to form a saying.  They read "Happy 1st Xmas Minky and Dinky from Fifi and Bob" ( but with their proper names). Their idea being this year it can be used word side out and over the coming years it can be used pictures side out. Will get OH to varnish it I think to preserve it better.


Once everything was dry we used some of the lovely silky ribbon we had been send  and strung them all together adding a bell to the ribbon in between each star. 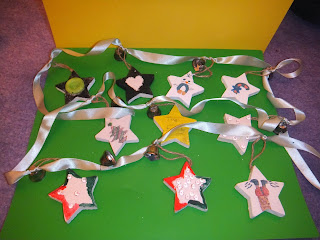 Here we have the garland.

The children have worked very very hard this week making all these items, and I am sure mum and Fraser and the grandparents will love them.

Thank you Country Baskets for the fabulous hamper which has helped me keep the children amused.