We have been geocaching again - it is addictive

Since we first tried geocaching a few weeks back, I seriously have become quite addicted to it. I took out a premium membership to Geocaching.com as they have some useful information on their site. You can register and use their site for free if you want to as I did for the first few weeks, but people pay to run these sites and I prefer to take out membership if I am going to carry on using them.

I over the last month have also tried a few different free caching apps but have found them to be unreliable, either not showing the caches that you are near or not logging on, and again decided as I am enjoying the hobby to pay for the proper app as well. Have only used it the once so far and I am sure there is a lot more I can do with it and will learn more when I have the time to use it again.

Its nice to see by sharing blog posts that other people take the time to read can inspire them to go out and try the hobby as well. My friend Cheryl at Madhouse Family reviews has been out twice so far and is enjoying it as much as me. Here are her two posts,  one and two  why not have a read of somebody elses experiences. Cheryl is doing urban caching due to her local, where as I am doing rural as round here they are all in parks, on beaches, along river walks or up the top of hills.

On Thursday hubby and I needed to go into the town for a few things, so we decided whilst out we would go down the beach and collect some small rocks to put into the bottom of some plant pots we need to make up with flowers in. Whilst we were at the beach we looked for any nearby caches and found one along the beach.

So we went up to one called Deil's Dyke. Was a beautiful day for a walk, and the cache was at the top of a hill over looking the beach.


Not only is geocaching fun it is a great way of getting exercise, this one was over a mile round trip from where we parked the car.

I phoned the children before I picked them up to see if they fancied finding a few local caches, and as they said yes I asked them to find a small "treasure" each that they could take and swap for a treasure already in the caches.

We set off for the first one, was a bit difficult to find somewhere to park as the road is a single track twisty hedge-lined road with very few passing places on, but we found a bit out the way as set off for ur first adventure.

Our first one was up at;

Barnweill Church  is a ruined pre-reformation kirk situated on rising ground on the slopes of Barnweill Hill, ; about 3km from Tarbolton. The church was known locally as the "Kirk in the Wood". It lies about 170m North North-East of Kirkhill Farm. Barnweill was central to the Protestant Reformation in Ayrshire through its association with John Knox.


The children had fun looking round the old church, and reading the gravestones, and as they were in a graveyard decided they would play at being zombies. They took it in turns at being dead and then came to me for some imaginary salt to bring the zombies back to life.


One curiosity is a memorial to Col J W Neil Smith of Barnweill and Swindridgemuir that also bears the details of his wife Evelyn Mary Mapis Duke who died on . 'Tout comprendre c'est tout pardonner' is carved on this stone and on a smaller wooden cross that bears her details alone 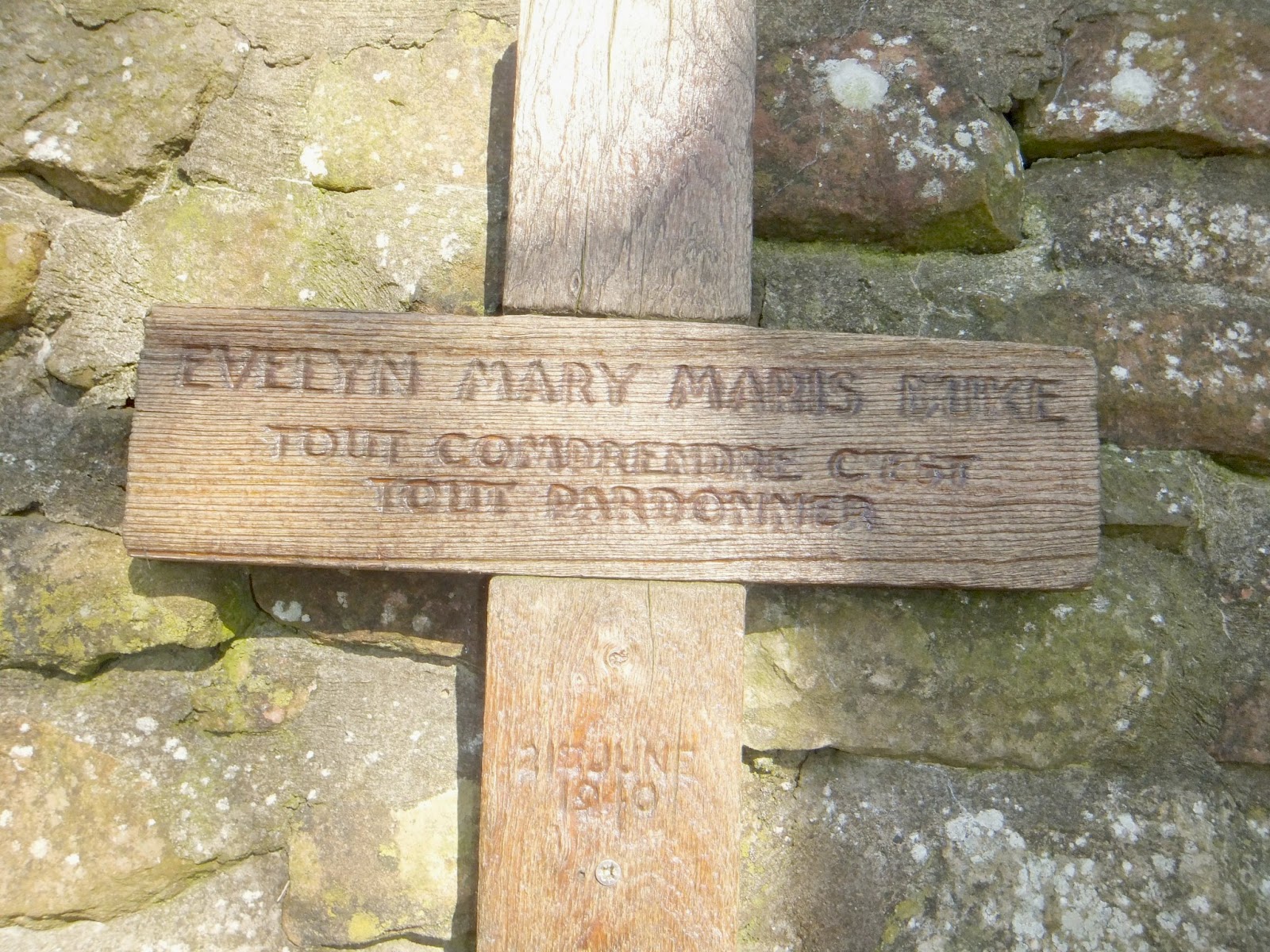 Once they had played and explored we went and found the cache, a fairly easy find. The children looked at the treasures and Bob swapped a toy soldier he had brought for a plastic dinosaur he fancied.


Once we had put this cache back where we found it we headed off for the next one. You can just about see it in the pictures of the children being zombies, on the horizon with trees either side. As we had driven down to where we were and knew there were not going to be any place we could park if we took the car, and also there was no where easy to turn the car round we decided to walk it.

So we walked up the hill, was a bit further than it looked, took us approx thirty mins to walk up there.

The Wallace Monument is a picturesque Gothic structure and is in a prominent situation, built to commemorate William Wallace at the time of an upsurge in the Scottish desire for self-determination, predating the 1869 Wallace Monument at Stirling.

They had fun running around and playing, here Fifi was (playing) pinning Bob to a tree.


The monument is not open to the public. OH has been up their before as has Bob and Fifi's parents many years ago ( before Bob was born). Not sure if he is still in the house but there are two houses up at the monument and we were friends with one of the tenants and he would let you have the key. I have not been up as it has a spiral staircase and I cannot come down a spiral staircase due to balance problems, but I am assured the view is outstanding.


They played around up here for quite a while, again they were playing games and Bob managed to fall into a patch of nettles, so that put paid to the adventure.

We are going to put some thought into the area we live in, up here, the farm, the village, and Auchencruive and in the coming weeks are going to put together some cache's of our own and place them for other people to find, should be fun.

Again great exercise, a history lesson, some fresh air, and some pleasurable time together.