I was given the opportunity to join in with The Morrisonmums (and Mossisondads) Bank holiday  weekend of fun in conjunction with Britmums.  Morrisons invited us to join to share the news of the new cheaper Morrisons. From the 2nd of May they have cut the prices of over a thousand of your favourite products. These are going to be every day low prices of the things we buy week in week out. The prices may have been cut but the quality remains as high as it it has always been. Their meat and fish are still the award winning products they have always been and their in store bakery is still using the same quality ingredients.

I was sent £80 of vouchers to see what I thought of it all. 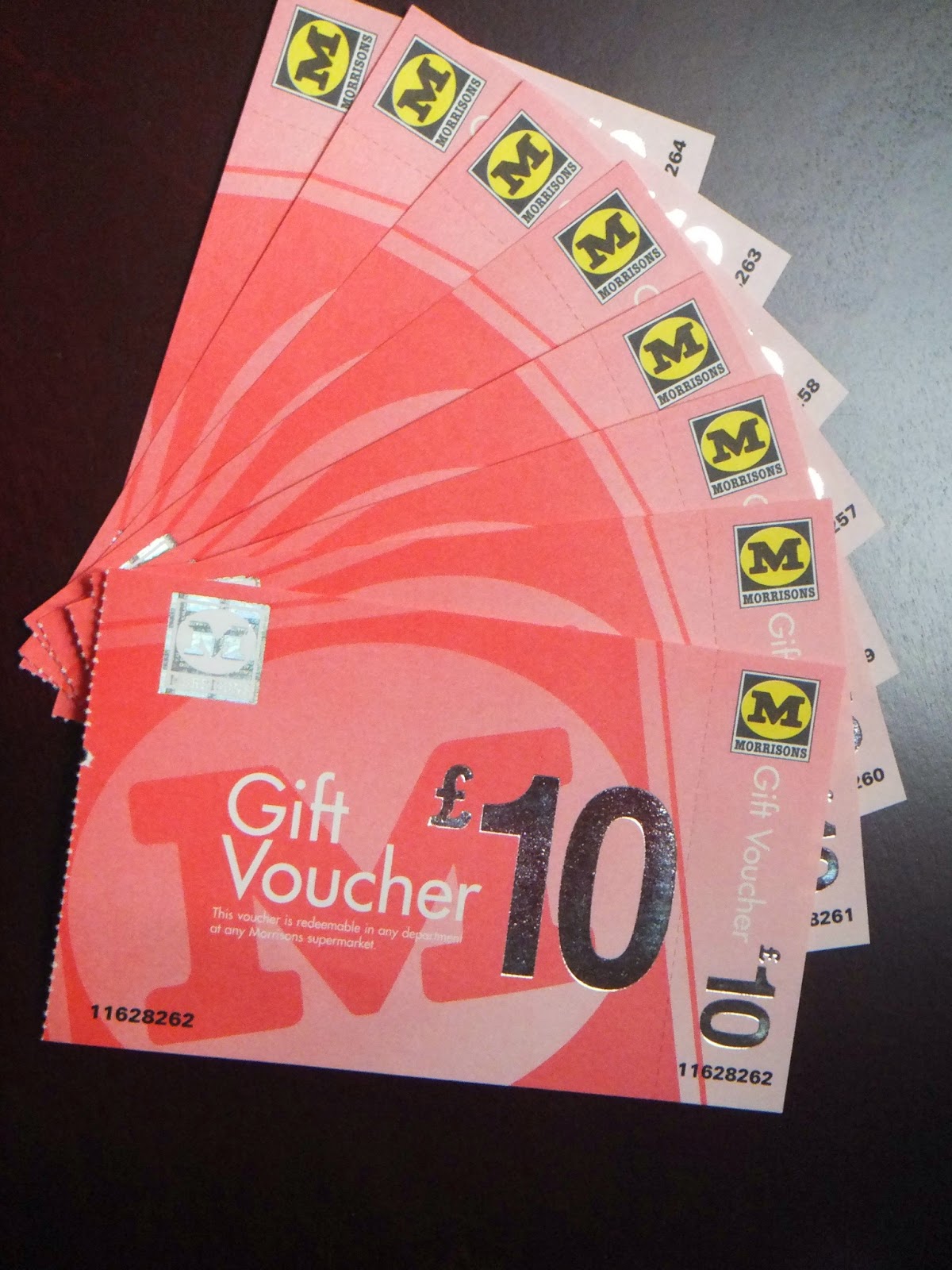 So on Thursday afternoon we set off to the store in Kilmarnock. It is a bigger store than the one in Ayr and equidistant to where we live and so I thought it may have more great items on offer.

We had decided on a barbecue  for family and friends. We were going to be catering for six adults and four children for definite (plus the twins of course who are not weaned yet) , with a possibility of two more adults one of whom is a vegetarian. We also need to cater for Bob's allergies as well.

There were adverts all over the store telling us about the new "I'm cheaper" options. 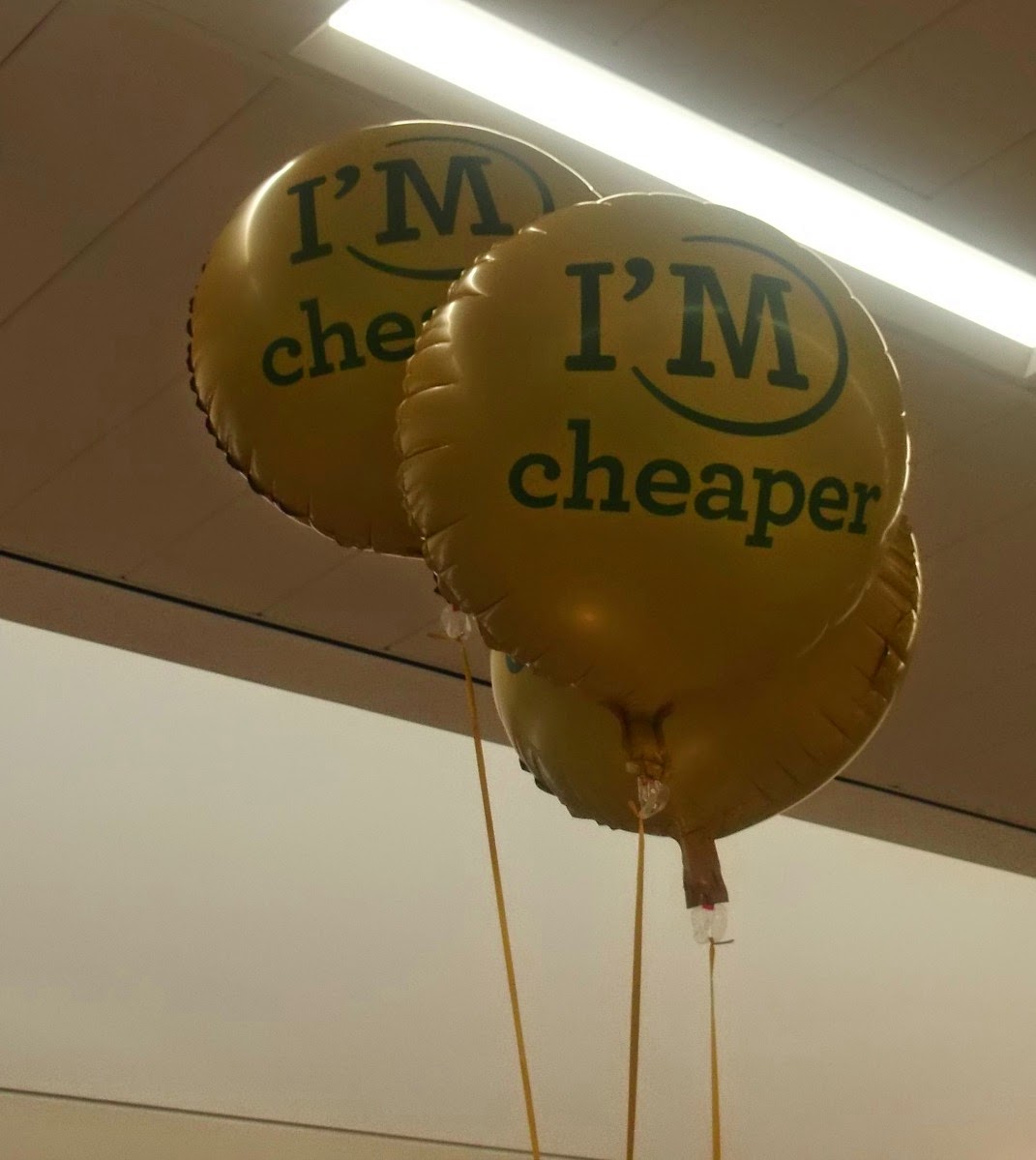 The signs are in the luxuries aisles 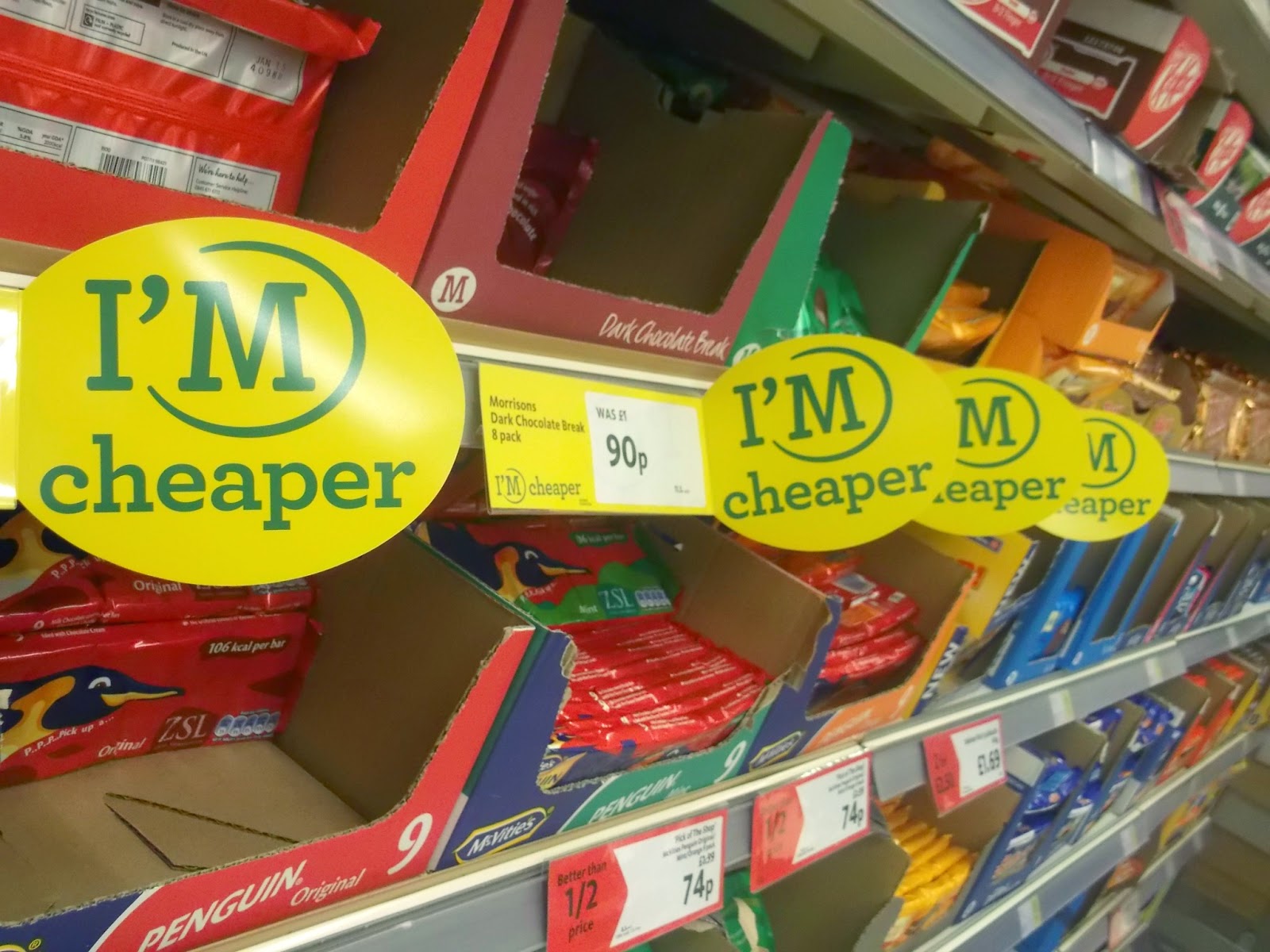 as well as pre-packaged meals 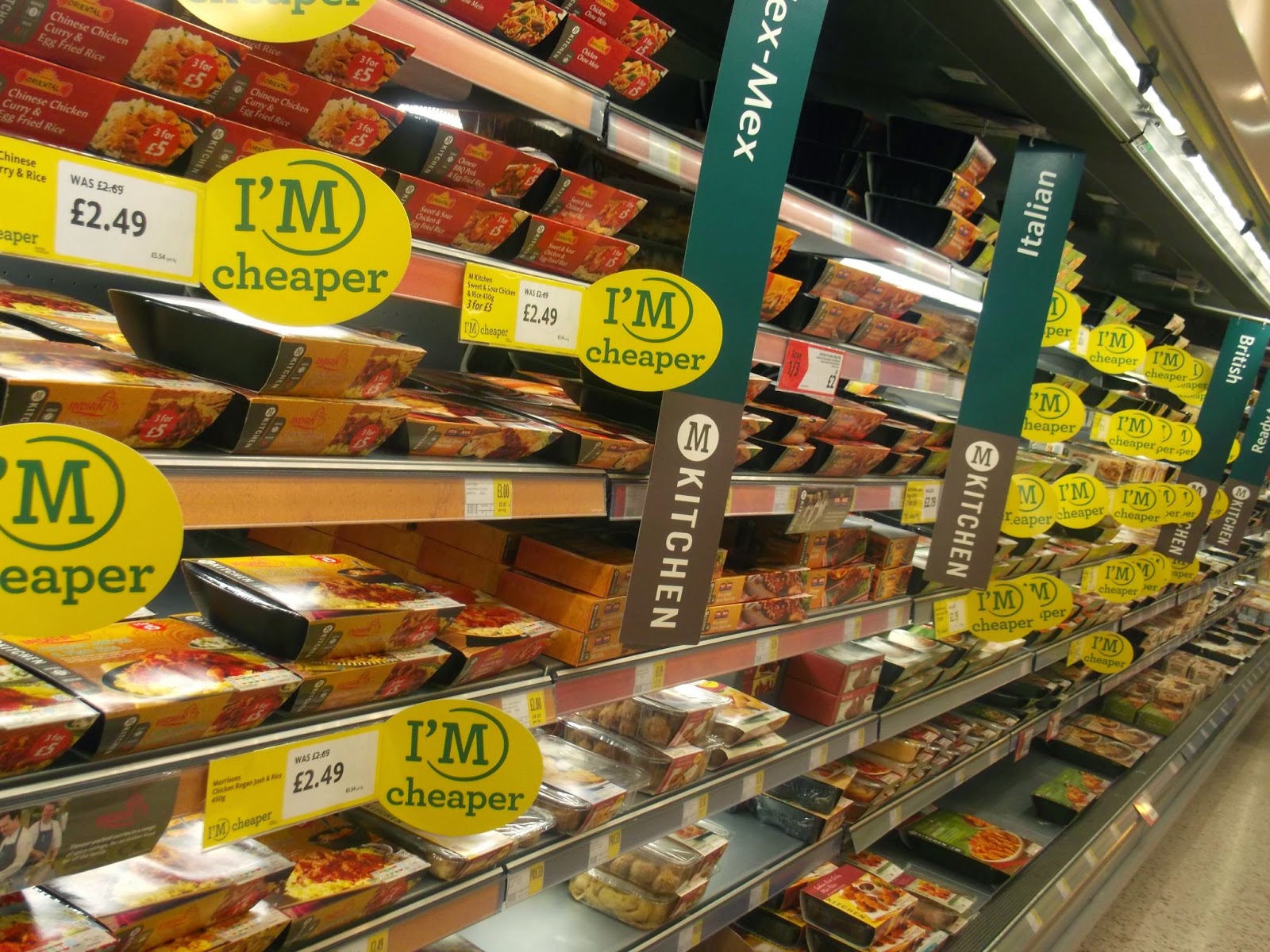 and to my husbands delight olives and pickles as well. 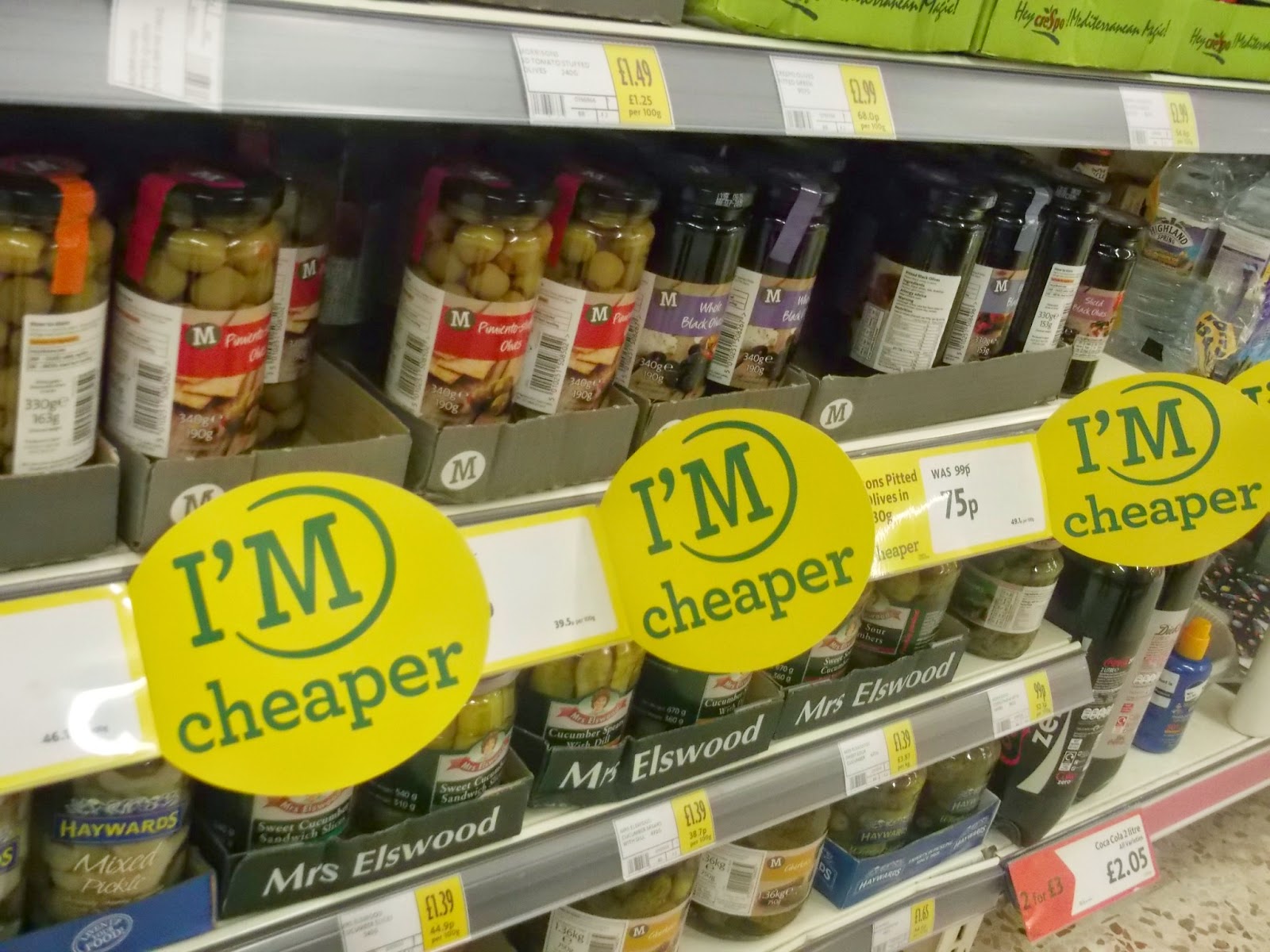 I shop in Morrisons every week and so I took with me a £4 voucher off of a £50 shop so I thought I may as well  use this as well.

We had a good look round starting in the fruit and veg aisles. We choose salad ingredients as well as some vegetables to add to kebab sticks we intended to make.

We chose beefburgers and sausages, bacon and quorn sausages, diced chicken and fish sticks. As well as purchasing one large and two small disposable barbecues on which to cook the food. 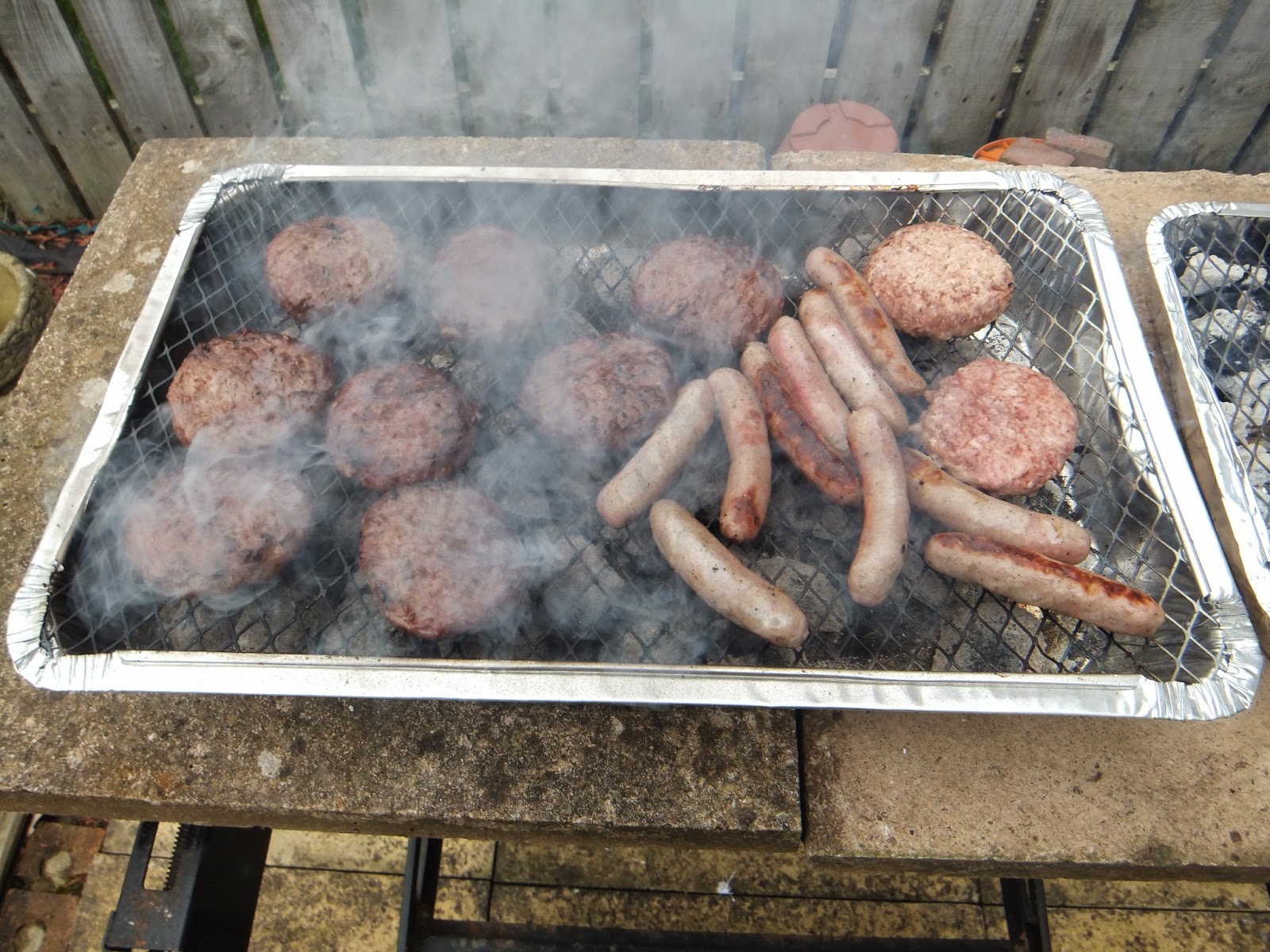 We topped this up with fruit juice, soft drinks, crisps, dips, sauces and dressings, marshmallows and sweets. A lot of the products were Morrisons own as I have never fault fault with the quality of these products.The spend between the food and juices and the actually barbecues came to just under £50.

I have always been a lover of Morrisons fresh fruit and veg, I find the quality better than our other local supermarkets. The burgers and sausages all cooked up succulently and everybody enjoyed them.  Dont seem to have a lot of pictures of the cooked food but then people were eating it...lol

We cheated and made this easier on the dishwasher (thats my OH btw) by also using paper plates though we did use proper glasses and plastic tumblers for the juice. 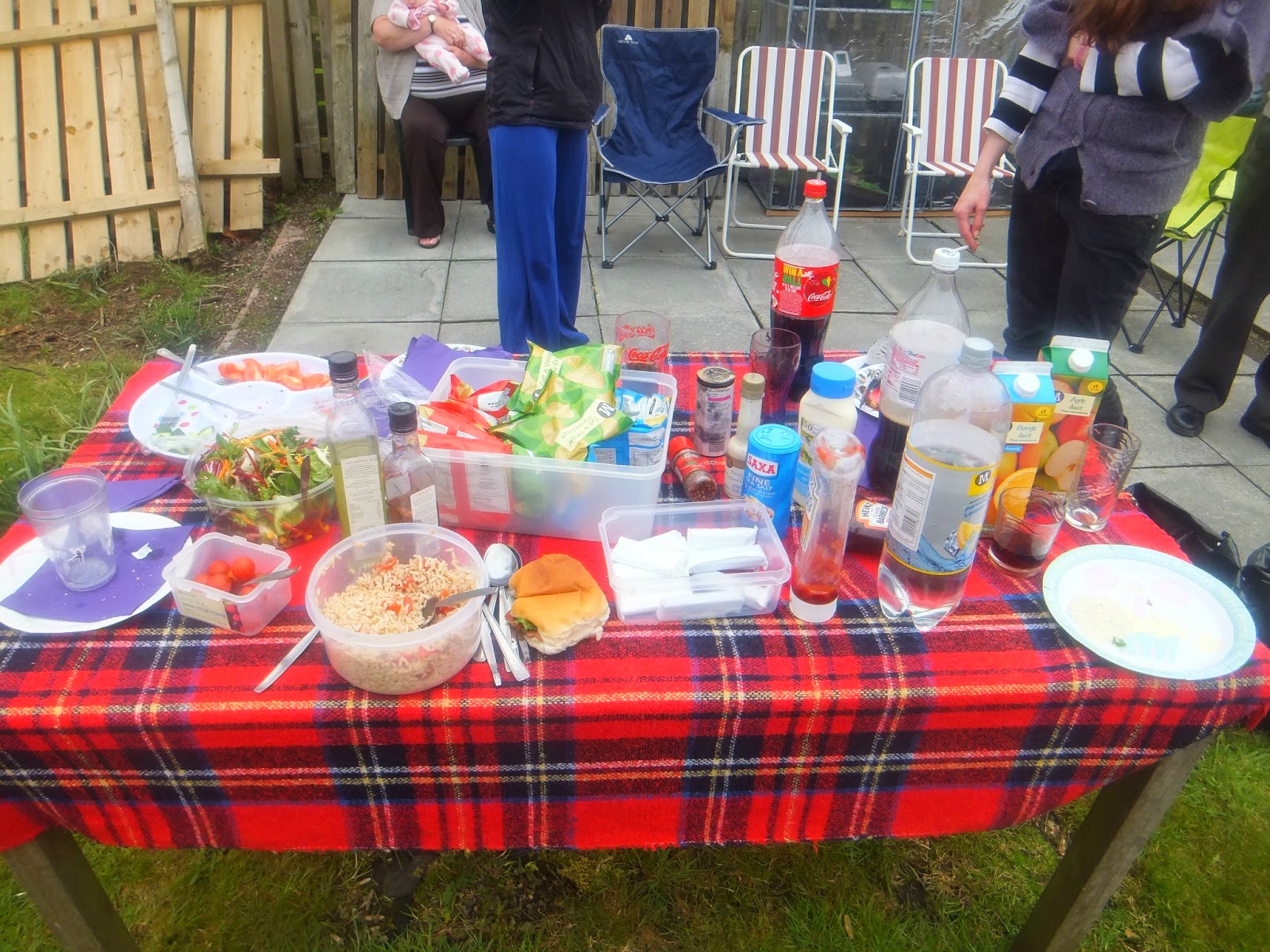 The two unconfirmed adults (our neighbours) were not back, but we had an "uninvited guest" and her daughter turn up. They were made more than welcome, I had not thought to invite them as they live miles down the coast.

Bob had plenty to choose from with all the fresh products and he had burgers ( from another shop) but their plain crisps were ok for him. He enjoyed making kebab sticks and cooking marshmallows, he did not feel left out in any respect which is important.

wholemeal rice with tuna and dip

Take three packs of cooked wholemeal rice ( or pre cook your own and allow to cool)
add a half drained tin of tuna in oil (or brine if preferred)
chop up tomatoes and pieces of pepper and stir through with the rice. 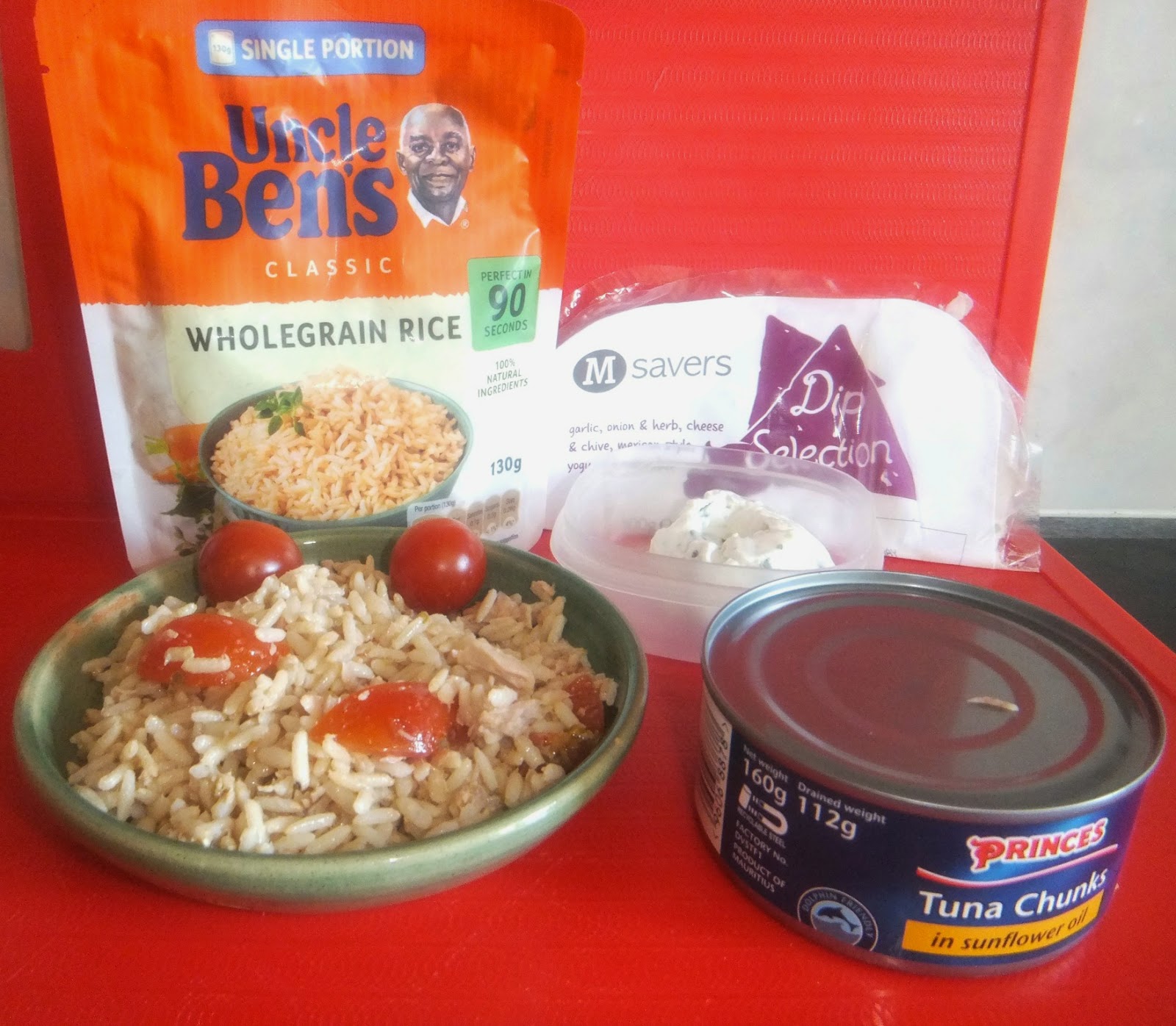 The children were happy to sit on the slabs whilst the adults got the chairs.

The adults spent half their time standing. My daughter made the most of having all four grandparents here to get a rest from the twins.

and enjoyed eating them. Glad it is not just my grandchildren that pull funny faces for pictures.

We had also prepared all the vegetables ready to go onto skewers and them let the children build their own up choosing what they wanted. K tried to squash two of everything on, and little I just added three button mushrooms and nothing else. I had precooked the chicken or these before hand so I knew it would be safe to eat.


We then played some games, including pin the tail on the donkey, and daughter decided to pin them on herself instead. 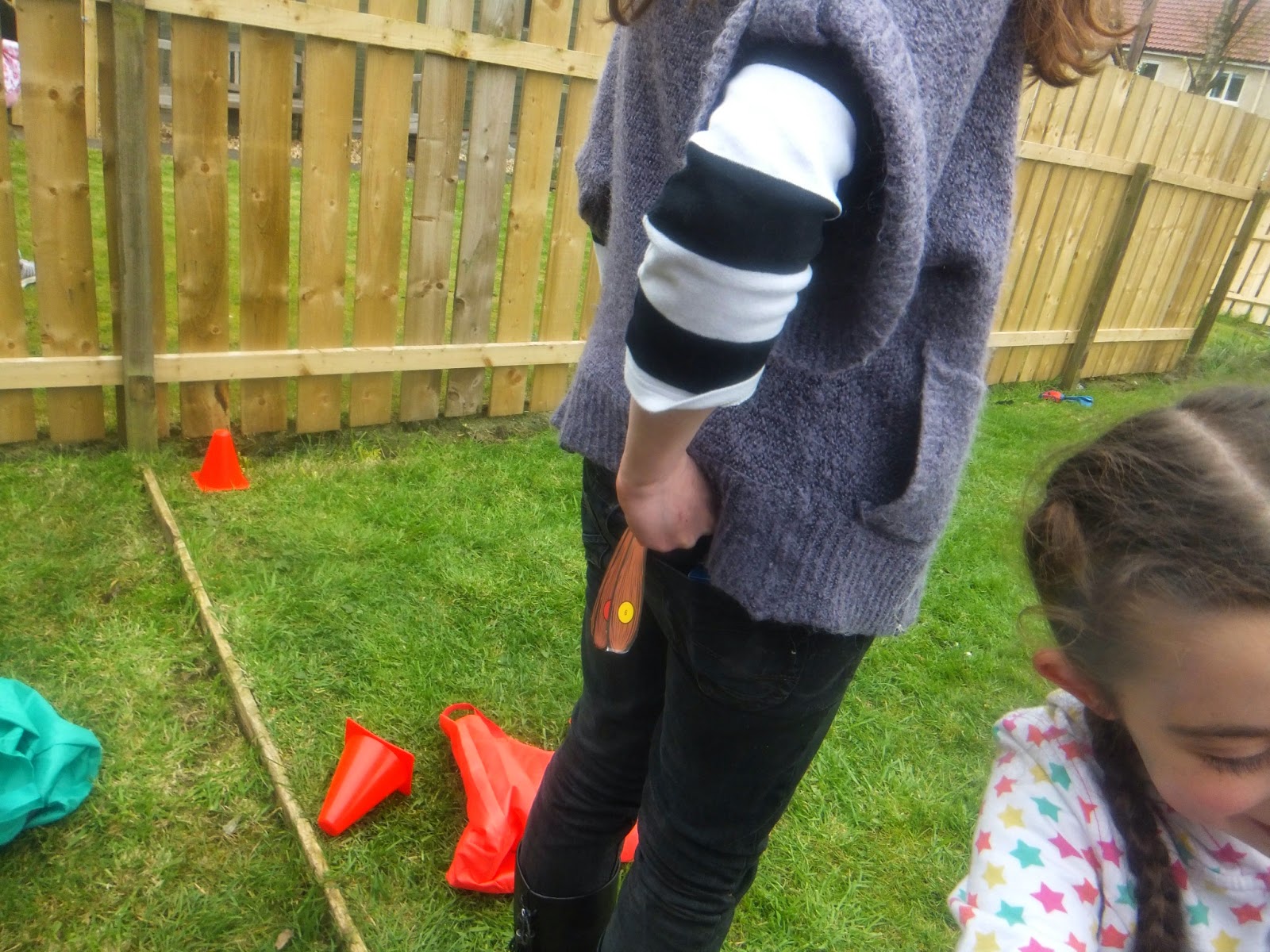 They did manage to overspill into next doors garden, as they were doing no harm we just left them.
Have to say his garden is better designed for children to run about it than ours is. 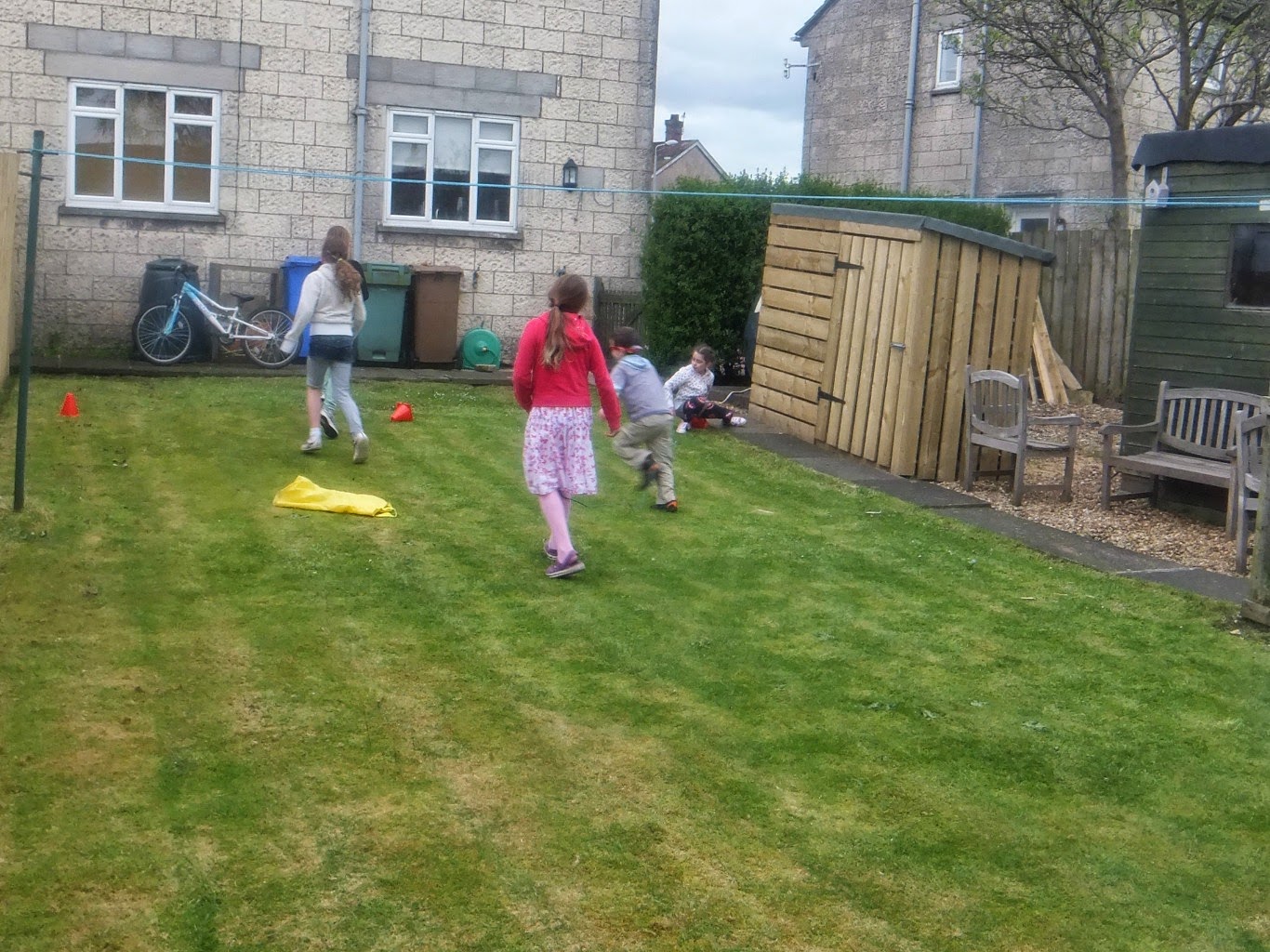 The twins of course loved all the attention they were receiving, but the girls were only allowed to hold them sat on the grass and not wandering around or on the slabs.


Here is Dinky with her other gran.

and back in the house with the gatecrasher, sorry with Tina.


The friends enjoy amusing the twins, bet they are not so keen when they are wrecking their games in a year or two.

So we had a barbecue, fed seven adults and five children, and all for £50, just over £4 a head.Three hours of fun.  It was enjoyable, great to see all the children being really nice together and us having friends who made very good company round. Lets face it you could barely take two children and two adults to the pictures for that money time you add on eats and drinks.

I would say it was money well spent.

I also took various bits of video that I have put together showing them having fun. We think there was some cheating going on here by A, but there were no prizes so nobody lost as such.

Thank you #MorrisonsMums for the fun afternoon.
Posted by fun as a gran at 08:23