following on from my success of this one and failure of this one I moved on to my next experiment.

Looking for ways to make yoghurt turn out slightly thicker. Years ago when I use to make it for me and the kids I use to add 1 tablespoon of dried milk powder to the milk whilst it was still hot and before I added the yoghurt culture itself. But as Bob is allergic to this, not just intolerant as we were, then this is not plausible, but last week browsing round the website at Natural Supplies I came across Dried goat milk powder  and thought this was just the thing I needed. (Please note  - to point out to others who might be looking at this, that goats milk (and sheeps milk, buffalo milk etc) is not suitable for people with a cows milk protein allergy - the proteins in each one are very similar, and official advice is that anyone with a milk protein allergy should avoid all milk proteins.- thanks to Sharron for comment)

So I decided to make 2 batches of yoghurt from the same basic ingredients and add a tablespoon to some of it but not the other and see if you could notice the difference. To make this a true experiment it had to be done with both lots being treated exactly the same for exactly the same length of time to know that it was a fair test. Now as I don't have a yoghurt maker I was trying to work out the best way of doing this. Normally I make my yoghurt 2ltrs at a time in the slow cooker, but didn't want to do it this way as there could be variable doing two different batches at two different times, so I thought I could still use my slow cooker, but do it in two separate containers stood in water in the slow cooker at the same time. 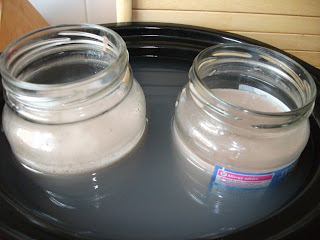 So I heated my chocolate Alpro soya milk which is generally always in the house as I like the stuff, and I thought chocolate yoghurt would be different for Bob to try, and then split into two separate glass jam jars. I then added 1 tablespoon of the goat milk powder to 1 jar, waited on them cooling to correct temperature and then added 2 tablespoons of the same yoghurt culture to each, stirred and placed both jars into warm water in the slow cooker and left for the usually 15 mins on 45 mins off for 5 hrs, then refrigerated them both overnight.

The result - the one with the added milk powder was a more normal yoghurt consistency, and funnily enough it also tasted sweeter, but not sure how.  The unchanged one was the normally consistency I get when making any of my yoghurt.

Verdict -worth adding for the extra thickness and will use in my natural yoghurt from now on, and it has added approx 10p onto the cost, especially worth it if you eat yoghurt as yoghurt ( me I just use it on cereals or eat with cake rather than on its own).

maybe need to look for goat milk and coconut milk next and experiment.

this is not a sponsored post, it was done with ingredients I bought myself.
Posted by fun as a gran at 21:52