Been another good month this month, although nothing much that I have won has been used by me, still wins that others can use none the less. 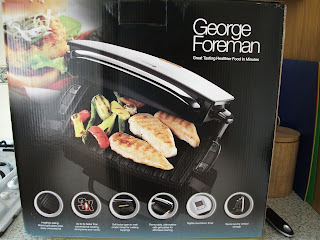 Won a George Foreman grill in a blog comp from Jacqueline over at tinned tomatoes great I thought as daughter No 2 borrowed mine for a few days approx 20 months ago, but no daughter No 1 had other ideas so it is now residing at her house. Was a nice one as well with a timer and removable plates, much more up market than the one I previously had.But handy for grandson as it is fully washable as plates come off and there is therefore much less risk of cross contamination for him. 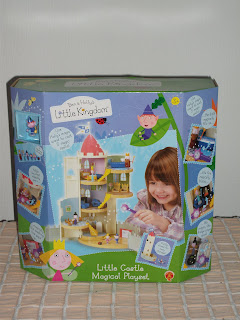 I got a wem to say I had won a Ben and Holly play castle with went off to another friend as my two are to old for that sort of thing.

Then next up I was fortunate enough to win £100 in vouchers for the Continental market that was being held here locally, this came from Westsound, my local radio station and you can read all about what I spent them on here , again very little was spent on me. 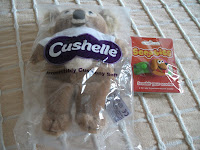 Next  win  was a cushelle bear from the FB comp, and got through a poster from Red House for Bob's wall. Won a  scooter clip as a runner up prize in a comp to win a micro scooter, and also got a wem to say I had won a booster seat from learning curve that will clip onto the dining chair, this will be handy as it will save Bob from having to kneel up or me from having to bring Fifis' car seat out the car so he can reach, will do a blog post on this item once it has been used and abused for a few weeks. 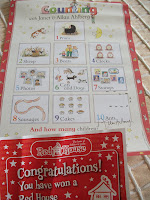 Life has a bad habit of throwing nice things my way when I can least do anything with them, we went off on holiday for 4 days last Monday, and hey presto Monday night I get  a wtc from News of the World to tell me I had won tickets to go and see Bon Jovi in Edinburgh on Wednesday night. The tickets had been posted to my address, and there was no way I was going home to pick them up and use them, to start with we were in a motel and had the dog with us and we would have been away for 8 or 9 hrs, so rather than waste them daughter No 1 went and lifted them and had a fab night with three of her pals at Murrayfield. I didnt even manage to get a photo of them to put on my blog as I never even saw them....que sera as they say. 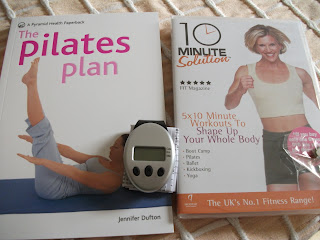 Nestle cereals have been running a prize  give away with codes from inside the packets and with the codes I had I managed to win a dvd, a pilates book and a pedometer. Have not had a chance to win more from this as I dont seem to be able to find the special boxes on the shops at all.

entered and won on the Fruit shoot skills kit, eventually....lol. this prize contains a digital skipping rope, digital ball, a webcam and a bag.

wem to say I have won A moon sand Candy factory from Helen over at The Crazy Kitchen , this is being run in conjunction with Toys R Us toyologists comp.
Posted by fun as a gran at 22:53