This one is a wee bit cheating under the heading as he didn't actually get any of them,as not suitable for him and he wasn't here,  but to keep the blog tidy and things easy to find the heading is handy.

This is a review post  but the thoughts on the products reviewed are my own.

Last week we made Bobs first ever tasting of pancakes here, which were a huge success with us all.


I had a batch of flour left from here, so decided to use it to make pancakes with. The flour is the last quarter of the mix consists of 50% (8oz) buckwheat flour, 25% brown rice flour(4oz), and 25% tapioca flour(4oz), to which I added 2 teaspoon of xanthan gum,
sieved together and split into four lots.

To this I added a teaspoon of egg replacer mixed with 3 teaspoons of water, and as Bob was not going to be eating these I used the Hazelnut and Almond Rice milk I had been sent by Rice Dreams here. This was to see whether this type of milk would be suitable for this purpose. 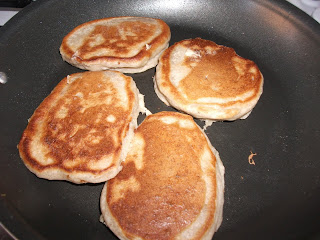 Stirred them up, popped them in the pan, and cooked them up. They had the usual air bubbles rising through them and coming to the top whilst in the pan as you would normally see. They turned brown which is unusual for items with egg replacer in. They did still look "stodgy" in the middle when cooked, and are obviously going to be heavier than normal pancakes as normally the egg helps them to be light and airy.

You could taste the nuts once products were cooked and I found them very flavour some.


These again were taken to work, as one of the girls there is dairy and gluten free so she more use to texture and taste more than my other colleagues.  Her comments - they were just like a normal pancake, you would not know they were egg free, and she loved the taste the milk gave them, and reckoned they would be lovely warm with maple syrup over the top.

two other people tried them and did not like them, they said they were not sweet enough, but I always cook with as little sugar as possible when cooking and I am use to pancakes with no sugar in. The fourth person like the flavour the milk gave them and says she would make them but eat them warm ( as we tend to do in this house).

verdict - those of us use to them thought they were very nice for a gluten/dairy/egg free product, well worth making, and a change from the normal., one would only eat them warm and the other two not struck by them at all.
Posted by fun as a gran at 16:22