This is another review thanks to Healthy Supplies, Giles & Posner, and Rice Dreams.

Following last weeks experiments with baking and taking to my little guinea pigs at work, thought we would try a different batch of flour and method.

We used the basic sponge layer cake off of the Doves Farm cake packet, but we used egg replacer instead of the banana as I didn't want them banana flavoured.

I mixed a batch of flour using 50% Dove Farm Plain white flour, 12.5% tapioca flour, 12.5% white rice flour, and 25% brown rice flour with 3 teaspoon of gluten free baking powder and 3.5 oz gluten substitute, sieved them together 3 times to make sure well mixed and popped it in a tupperware.

I put 5oz brown sugar in a bowl and added 1 teaspoon vanilla essence and 6 tablespoon sunflower oil, I then added an egg made from the egg replacer and stirred in 6oz of above flour, mixed it all together and added approx 3 oz water and 3 oz raisins to make a normal cake consistency. Cooked up 1 batch of these, and whilst these were cooking I added 2 oz home made natural soya yoghurt because it made a very nice pancake on Tuesday, so batch 2 was cooked in the same way, and whilst it was cooking I added a grated pear to the mix that was left to see how it faired.

Now when I had finished baking hubby came into the kitchen and complained about more yucky Bob baking...never get anything normal any more.....then promptly demolished 3 cakes from batch 1 and a few chocolate ones beside. I cannot risk using the cup cake maker with normal ingredients as it only takes 1 crumb of cross contamination to put Bob at a high risk of anyphalaxis and so is not worth it.

The girls at work thought this weeks cakes were more normal, more what they would expect a cake to be, not as dry and crumbly as last weeks, they had thought last weeks were ok but much preferred this weeks.

Batch 1 were the favourite with a nice crumbly texture, sweet and fruity and they would go for these again.
Batch 2 ( as 1 with yoghurt added) were soft and sweet and chewy with a pancake taste
Batch 3 (as 2 with grated pear in) the girls could not tell the difference between 2 and 3, but is a handy way to get fruit into a child who will not eat fruit.


Gluten free cakes don't keep very long not a prob;em when the kids are here as they are eaten usually before they are cool. But from trialling out these various recipes I feel they keep better with the gluten substitute in, and even better with a nicer texture on day 2 with the xanthan gum in, this overall tends to give a much more elaticy consistency when the mixture is raw. So from now on I will be adding one or the other to my cakes in future, and would recommend if you have not tried either of these products to give them a go.


I have been wandering around the internet in search of recipes I can adapt using the ingredients I have in the cupboard and came across the marvellous, wonderful amazing blog at Pig in the kitchen. Mel (Mrs Pig) has a daughter who is allergic to eggs, milk, nuts and mustard and she says all her recipes can be adapted to make them gluten free as well......what more do I want? why am I even experimenting I wonder when you find this site with so many yummy things on it?....but hey I am loving this and if it all comes to easy Bob and Fifi will miss out on a lot of baking and my guinea pig work mates will feel redundant!!


But I had to try her chocolate cupcakes. These are made using the same method as you would use for choux pastry, fiddly but not rocket science, and so these to went into my cup cake maker as well.I used the Calcium Rice dreams milk in mine. 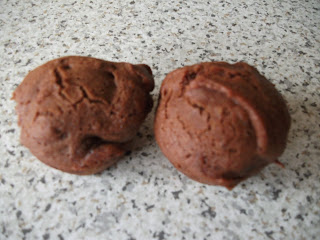 Batch 4 - the chocolate cakes, they thought these were dryer ( made with soya marg and sugar rather than oil) with a strange coppery after taste, probably caused by the linseed. Might try this recipe with oil instead of vitalite at some point.