The barbecue that nearly wasn't.

I accepted #TheCharcoalChallenge  thrown down by Money Saving Expert

Now summer is in full swing, households all over the country will be firing up the barbecue for some outdoor fun. Having a barbecue can be a fantastic occasion. It’s a chance to catch up with family, friends and to eat some yummy food, all while being outside catching some rays. What’s not to love?


Well I cannot think why in this gorgeous weather I would not want to take up the challenge.We were going to have the barbecue in our garden as a sort of house warming party, but when some of the guests said they could not make it till 6pm we decided to enjoy the company of the same people but we would change the venue to our friends cottage as the evening did not suit them to come to us.

So I decided to eek out my money as I had a voucher from a local supermarket for £12 off if we spent £60, so what better way to be creative with my money?


So we went off and did a pile of shopping, we had no vegetarians amongst out guests so it was easy to buy burgers and bacon and sausages all on buy two for £5 or buy three for £10 so they made for a great buy.

We added three dozen rolls to this. We topped up with coleslaw, sauces and cheese. We then wandered off and bought crisps, snacks and a bag of chocolate/toffee's that was a very good buy so people could pick until the food was ready. Thank goodness we did or they may have just gone and hunted out the nearest chip shop. At this point I am glad we had no young children there.

Lastly we had picked up bottled fizzy water, pepsi, coke and diet coke as well as some fresh fruit juice, most of the drinkers were driving so I did not buy alcohol.

We roughly added up the total and decided we were under the amount needed, and topped up with a few things for the house as earlier in the week we had picked up four disposable barbecues when we had been out shopping with son No1, they had cost us £8 for the four. By some miracle the total came to exactly £60.

So once we had been to the supermarket we went round and picked up two of the guests who do not drive as the cottage is isolated. They had brought some alcohol with them.

We arrived at our venue, a lovely rural country cottage, to find that seats and the table were already in place along with two of the barbecues reading for lighting.


So we lit the first two barbecues, and waited on the flames dying down and the charcoal being ready for cooking on. Sadly these first two actually did not come to anything, we did place food on them but apart from one small area the rest did not heat.


Had to laugh at this point we realised we were going to be short of a chair, so what better way than the cottage owner to make us one, from chuck of wood, to shaped to usable, all while waiting on the food starting to cook, very clever I have to say.


So after an hour and our first lot of food still being virtually raw we decided to light a third one. By now two more of the guests had turned up, daughter No3 and her OH and then my lovely ex neighbour Sam.


We transferred  the food off of one of the non heating barbecue onto the newly light one.


We then broke every rule in a "good practice in barbecuing" and took the mesh off of the top of one of the cold ones, cutting my hands in the process, doused a napkin in petrol, placed the napkin on the cold charcoal, placed the mesh back on top and then lit it with a long match. It relit and whilst still flaming we placed the food off of the second cold barbecue onto the flaming one and did the same to the second cold one. We had tried laying the petrol soaked napkin on top but that did not work.

This produced enough of a heat to start cooking them, but again they really came to nothing. Our final set of guests were due at 6.30pm and phoned for us to meet them as they did not know where the cottage was and it is difficult to find for the first time, so we got them to pick up another couple of disposable barbecues on the way past the shop.


We then lit this barbecue and finally managed to get some food cooking.


Meanwhile there was a lot of chat and laughter and fun going on. We even had an uninvited guest turn up who happily accepted a drink from us.


I had brought along a product I did a review on about a year ago as some of hubby's fishing friends wanted to see it working, and in typical fashion even this turned into a laugh, with R pretending to be a dolly bird as you use to see on TV.
Have to say they were impressed with the product.

Daughter No3 got her OH to push her on the swing whilst waiting for food.

After we finally ate we decided to take a walk through the woods down to the river, its such a beautiful place, shame not to share the beauty with friends who have not been there before. Had to laugh at E who thought she was auditioning  for "I'm a Celebrity" but she couldn't complete the audition as we couldn't find enough grubs. 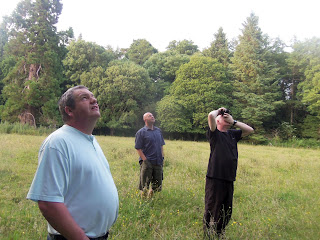 Thanks to all of you for coming and giving us a fun evening, and to the cottage owner for hosting the event.
Posted by fun as a gran at 19:33