At work a few weeks ago on the tables was a poster advertising what seemed like a fun few hours out. It said it was for staff (thats me), patients, and service users - well Bob qualifies on those grounds so as I was watching the children today whilst Daughter No 1 and her OH went for the twenty week scan to see what sex the twins are. You can see for yourself here, So I had thought we would go along and join in the fun.

This morning we had heavy heavy rain and amazing thunderstorms, the first break in this hot weather we have had at all. Luckily enough just after 11am the rain stopped and so we decided to go anyway and hope the rain stayed away, it did. 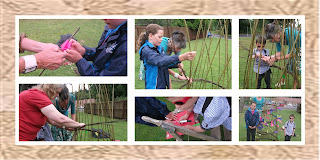 We arrived just after 12 to find two ladies setting up what I was to find out was a clootie tree, for the un-initiated like myself a clootie tree is explained here  This was being run by a lady called Lise Bech who runs bech baskets, you can read about this talented woman here. Lise explained how she harvests her material, how it is soaked in the river to make it soft and pliable for a week before she attends such an event as this. The children and I put the first three wish rags onto the tree, and Lise helped us all weave our wishes in.


We then wandered down to the main area where they had marquees set up, there had been a tai-chi demonstration on but we had missed this whilst doing the weaving.

We then wandered into the other marquee, this was a health information marquee, the children spotted some stop smoking information and freebies and Fifi picked some up for her mum, as Fifi tells me smoking when you are pregnant can harm your babies, and she does not want mum harming Minky and Dinky.

Also in there was a chance to pick your own fruit and make a smoothie. I explained to Bob that he 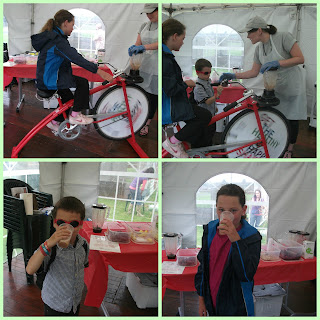 could not have one as they were using strawberries and kiwis, both of which he is allergic to. But the lady told me she had clean blenders in a box in case people with allergies came along, so he was over the moon he could get one. She did cover herself and say there may be a risk of cross contamination, but risk looked very minimal to me and Bob has to live a normal life.  Now remembering this is a health promotion being run by the NHS the blender was powered by a bike, and to get your smoothie you had to peddle!! Bob was far to small to reach so Fifi had to do the peddling for both of them. Whilst she was on the bike the chain came off so the ladies had to fix it.


While we were waiting for the bike to be fixed the official photographer came in and asked me if he could use Bob for some photographs of the event, I said yes as I knew mummy would not mind. He then asked Bob if he could do superhero poses, to which Bob tells him his name is Bob the Superhero.

When he realise I had two children with me he asked Fifi if she wanted to be in as well, so she willingly said yes. So we wandered off to where he wanted the photographs taken, took some of them walking and then stood on the seats that are carved from trees. I was in fits at the antics of Bob as he willingly did what the photographer asked him, shouting and cheering in all the right places.

Fame over we went back to find they had fixed the bike and the children could get their smoothies.

As by this time we had missed the bird box demonstration we had hoped to see we went to do the treasure hunt. This had been set up along one of the paths that have just been finished.

The clues were in no particular order, you had to find the answer to the clue, write down what the answer was and then find a letter and write that down. Once you had found all the letters you had to rearrange them into a phrase, this took us a wee while as we were playing with silly ideas and having a giggle, the phrase we came up with was "walk a bit more" This may have been easier for the children had there been clipboards available to lean their paper on, but then as they were the only two children there I am not sure if they were expecting children or not. Everybody else seemed to be staff out on their lunch break. 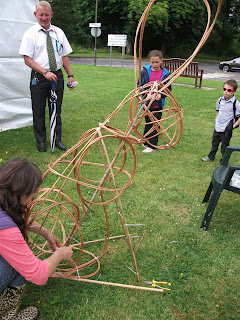 Whilst in the woods we spotted butterflies, apparently there are foxes, pheasants, and a deer as well as a large hare called Big Eric. There was a lady there sculpturing a hare out of branches that is going to sit on the hillside. May take the children back one day and go and walk the twenty minute walk and see what we can see.