The traditions of Christmas, old and not so old.

Years ago when my own children were young we always made mince pies for Santa, he much preferred the fact we made the effort to make them for him and this is a tradition that we have carried on with since the year my daughter moved up here from down south. Fifi turned five that Christmas and she clearly remembers coming to Auntie T's house and as well as making mince pies for Santa we made pizzas for tea that night along with Uncle S.

So a few days before Christmas the children came over and made mince pies and melting snowman biscuits.

Once they have finished baking we made some Christmas crackers to put on the table for Christmas.


We started with another tradition the following year and decided we all enjoyed it that much we would carry it on. This started because my daughter had moved into  rather a small flat and there wasn't room for everybody and she wanted to spend her first Christmas in her new house and not somewhere else. So we decided that rather than taking the children's presents to them on Christmas Day we would see them on Christmas Day spend some time with them but bring them to our house the following day and do Christmas all over again with presents from our family with us all there.

So we have carried on with this tradition. The children get the best of both worlds this way, my daughter also gets a break from them and they have another day of fun.

So as usual we popped over on Christmas Day and spent some time with them.


So we left them to the rest of their day and we went home to the peace and quiet to normality.

On Boxing Day we went round to pick them up and bring them over. We sat and waited on Auntie H and her OH coming over.


So Bob wanted to use his new camera, so he took one


and then granddad took one

Once the other visitors arrived we started with the present unwrapping. 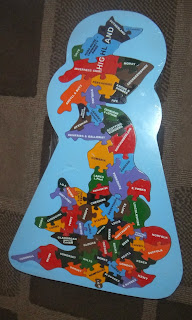 and then we all had fun putting the puzzle back together. It took the five of us a while but it was educational fun.

We pulled the home made crackers at lunch time, and we all wore our hats.

As Auntie T could not make it down for Boxing Day the children had a third day of fun, on the friday.
When Auntie T came down the children, all four of them, along with mum and dad came
over.

Hope everybody else had a nice Christmas.
Posted by fun as a gran at 19:45